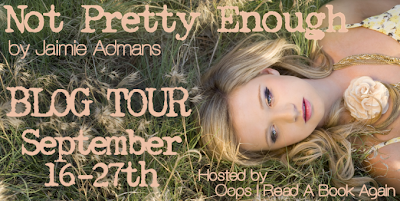 Today, I have the tour for Not Pretty Enough by Jaimie Admans on the blog. This is a great young adult novel and I am excited to share a review, playlist and giveaway with you. To follow the rest of the tour, click on the tour banner above.

~Synopsis~
“New Year’s Resolutions:
1. Lloyd Layton will know I exist. He once said three whole words to me, so this is obviously progress. If I don’t get a proper conversation out of him soon, then I’ll take my top off and streak through the cafeteria, because nobody could fail to notice these boobs.
2. I will not get expelled for streaking through the cafeteria.”

Those are the words that begin her mission.
Chessie is fourteen, not pretty enough, and very much in love. Lloyd Layton is hot, popular, and unaware of Chessie’s existence.
Her goal is clear: to get Lloyd to love her as much as she loves him, and she has exactly one year to do it.
As Chessie’s obsession with Lloyd reaches boiling point and she starts to spin a web of lies that spiral out of control, Lloyd turns out to be not quite the prince she thought he was. Can Chessie avoid the gathering storm before things go too far? 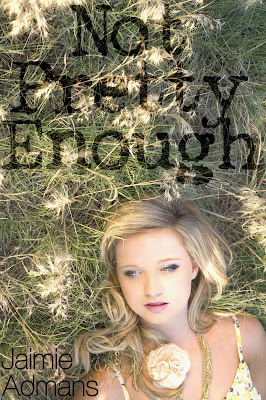 I read a lot of contemporary romance and new adult books so I really liked the change up that Not Pretty Enough brought to my reading palette. This book really delves into the topic of becoming an adult and all of the insecurities and changes that are experienced when you move from a kid to a teenager. I really liked that the author dealt with it in a humorous way while still touching on the subject of self esteem at such a pivotal time in a young adult’s life.

Oh Chessie, poor girl. She is 14 and just starting year 9 in school. She’s doesn’t really have self esteem issues but just like any girl her age, she is self conscious of her body and who she is. She finds nothing spectacular about herself and is quick to criticize her hair or her height or her looks. I can totally relate to Chessie. I went through an early growth spurt and was 5’5” by the seventh grade. I was taller than most of the boys in my class. I also developed earlier too. Oh the problems I shared with Chessie. As an adult woman, you hear so many women complaining about having small boobs like it’s some sort of travesty. Trust me, large boobs in the sixth grade is not something to be excited about. Anyways, I know I wasn’t and neither is Chessie.

Chessie has a mega crush on Lloyd Layton. He is tall, cute and popular and she is desperate for his attention. She definitely gets it but not in a good way. I feel tremendously bad for her because every embarrassing thing that can happen to this girl in front of Lloyd does in fact happen. From walking into poles to hair dye disasters, Chessie just can’t seem to stop humiliating herself every time she’s near Lloyd. I think it’s fate’s way of saying “he’s not the guy for you.” I like Chessie’s friends, Ewan and Deb. They are really supportive and constantly reminding her that she is perfect the way she is and if Lloyd doesn’t like her than it’s his loss. I just wish she would listen to them. Based on their interactions, I don’t really think Lloyd is worth all the trouble anyways.

I have to be honest; this was actually a little painful to read. I mean that in a good way. I liked the book but I remember being 14 and how self conscious you are and how much you want to impress the boy you really like. If any one of the things that happened to Chessie around Lloyd had happened to me at that age, I would have been humiliated. It was like watching a 20 car pileup, it just kept happening again and again and I actually lost count of how many unfortunate incidents she experienced. I felt like she had a very unhealthy fascination with Lloyd. She may have done some stalking and she let her lying get out of control. I was quite shocked at some of the lies she told and the lengths she would go to get Lloyd’s attention. This book definitely also taught a valuable lesson in lying and the consequences. Chessie told some pretty big lies that spiraled out of control and just like a lie always does, they caught up with her.

Overall, I felt like this was a really good young adult book that realistically delved into the topic of teen self esteem. In the end, I don’t think Lloyd was worth all of Chessie’s effort and I was glad that she finally realized that she was perfect just the way she was and that the right guy will see her for all of those qualities.

~Not Pretty Enough Playlist~
“Unpretty” by TLC
“The Way You Are” by Bruno Mars
“Freckles” by Natasha Bedingfield
“Tied Together With a Smile” by Taylor Swift
“Perfect Misfit” by Liz Phair
“Liar, Liar” by A Fine Frenzy
“Beautiful” by Christina Aguilera
“Born This Way” by Lady Gaga 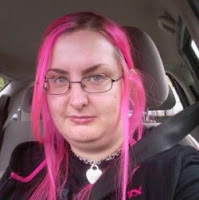 Jaimie is a 28-year-old English-sounding Welsh girl with an awkward-to-spell name. She lives in South Wales and enjoys writing, gardening, drinking tea and watching horror movies. She hates spiders and cheese & onion crisps. She has been writing for years but has never before plucked up the courage to tell people. Afterlife Academy is her third novel and she hopes you enjoy it. There are plenty more on the way!


*An eBook copy was provided to me in exchange for a fair and honest review. All opinions expressed are my own and unbiased.*
Posted by Unknown at 1:00 AM