Today is my stop on the blog tour for Unconditional by Melody Grace. I love this series and I am excited to share my review and an excerpt with you. Check it out along with the giveaway below.

~Synopsis~
"I’ve spent my whole life chasing perfection: perfect looks, perfect man, perfect home. But in one brutal moment, I realized it was all just a beautiful lie…"

Carina MacKenzie is fleeing from her past. Picking up the wreckage of her shattered dreams, she seeks comfort in the only place she’s ever felt safe: Beachwood Bay.

Garrett Sawyer isn’t looking to be anyone’s savior. Scarred by old betrayals, he’s sworn never to put his heart on the line again -- especially not for a damaged, high-maintenance girl like Carina. But passion knows no logic, and soon, their reckless chemistry is making him forget his bitter vows.

Two damaged hearts. The hope of true love. As their passion blazes out of control, Carina and Garrett struggle to escape their legacies of hurt. But can you ever outrun the past? And when everything is on the line, can they trust enough to build a love that's unconditional? 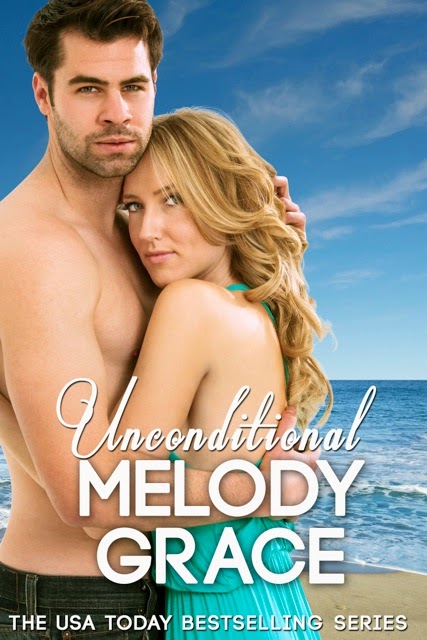 I am a Melody Grace fan for life and I absolutely adore the Beachwood Bay series. I have to admit that I was a bit skeptical of Unconditional when I found out that Carina was the heroine. I didn’t care for her too much in Unbroken and I wasn’t sure how Melody could turn her around. However, I somehow knew she’d end up making me love Carina and I was right.

Carina definitely puts on a show and really hides her true self. Deep inside, she is struggling with guilt and self-loathing that causes her to come off as frigid and cold. She has used her demeanor as a coping mechanism for so long that she doesn’t allow herself to feel emotion. I really liked Carina’s growth and there is definitely so much more to her than meets the eye. She doesn’t believe she deserves love and kindness but when she opens up to Garrett, she sees a new life and a new start. She works really hard to make amends and figure out who she is and what she wants out of her life. I liked that she reached out to Juliet for forgiveness and a second chance but respected her feelings and didn’t push her too hard.

I loved Garrett! He is such a sweet and incredible man. He is perceived as a bad boy, man whore but the truth is, he has really been hurt in the past and he is afraid to love again. I was desperate to find out what had happened to him in the past and my heart truly broke for him when it was revealed. I hated that Garrett blamed himself so much for what happened and refused to let himself love again. I really liked the way he supported and helped Carina. He saw through her façade and he opened his heart to her. When he pushed her away, I wanted to punch him in the face because I hated that he was always punishing himself.

Garrett and Carina had incredible chemistry and the sexual tension was very palpable. They were definitely at each other’s throats in the beginning and really out to frustrate one another but really that was how they dealt with the burning desire they had for each other. I liked the way Carina fought for Garrett. She wanted him and she didn’t back down easy. She knew he wanted her too and she was determined to break him. I liked that Garrett didn’t see Carina as another quick lay, but instead, really felt something for her. They both deserve happiness and love and they definitely found it in each other. It may have been a rocky road and taken them both some time to admit their feelings but when they finally let all the fear go, they created something really perfect.

Overall, I really enjoyed this book. It was a fantastic addition to a wonderful series and once again I was enamored with the characters, the writing, and the plot. What I loved the most was how Melody took a less than favorable character from a previous book and developed her into someone that I truly liked. 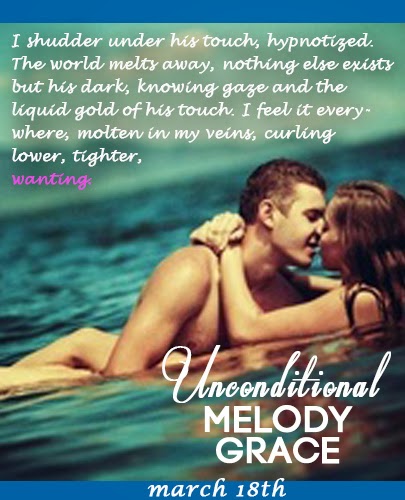 ~Excerpt~
What the hell are you thinking? Carina McKenzie is off-limits. I stride away from her before she can see how rattled I am, waiting until I’m safe in the front seat of my truck before I let out a breath of pure desire.

I only meant to tease her, push her buttons some more as payback for being such a judgmental bitch, but once I got close, gazing into those bright blue eyes, I couldn’t stop myself reaching out for a touch of her silken skin.

And then it all went to hell.

Lust hit me like a tire-iron, and suddenly, I didn’t care about her the girl I just packed out the door only an hour before. I didn’t care about the stuffed-shirt of a fiancé she’s got waiting back home. All I wanted was her. To capture those perfect pink lips with my own, to taste her, tease her. Drive her so crazy with desire she forgot this bitching, and all her stuck-up complaints. I wanted to see her come undone, crying out, so caught up in ecstasy she forgot her own name---

I slam the steering wheel with a groan.

What the hell is wrong with you? You can’t stand the girl, she’s nothing but a stuck up,

drama queen bitch! I take a gulp of air, and turn my key in the ignition, backing out of the driveway past her fancy new BMW. What she’s even doing in Beachwood Bay is anyone’s guess. She’s the last person I expected to find showing up in the middle of the night like that. She probably thought she’d find some chi-chi beach hideaway to do her nails and catch up on fashion magazines. I’d bet a hundred bucks, she won’t be there when I get back tonight. I wouldn’t blame her. I replay the scene on the porch again as I drive through town, remembering the dazed look of intoxicating desire on her face -- and then the flash of anger when I turned the tables, and pretended like it was all just a game.

I feel a stab of guilt. Maybe I shouldn’t have gone so far, but Carina finds a way to push my buttons, she always does. That sniping about Lorna, and what a man-whore I am -- it was just like the wedding. She acts like she’s so much better than me, like I’m nothing to her, it just makes me want to show her how wrong she is -- that this strange chemistry works both ways, and she wants me just as much as I want her.

I don’t understand it. Girls like Carina have never been my type. Sure, she’s beautiful, but that kind of beauty is all make-up and fake smiles; it’s like they spend all their time pretending to be someone else, there’s nothing left under the surface at all. They don’t know how to feel, or know themselves, and once you get them in bed... Well, it’s all fake porny moans and writhing, like they’re performing for someone who isn’t even there. But Carina... I see a flash of those blue eyes, wide with lust; her perfect pink lips parted, her breath coming fast. That girl’s a mystery, I just can’t seem to figure out. One minute she’s playing the society bitch, sneering down her nose at me, and the next, it’s like she’s someone else completely. The mask slips, and suddenly, I see a different girl underneath it all: someone raw, and fragile, and achingly real.

Which girl is she? The one who sneers down her nose at me, or the girl who watches the shore with shadows on her face, and demons hiding behind her smile. The girl who can’t hide the desire that in her eyes when she looks at me. A glimpse of a passion that could take my breath away. Forget it, I tell myself harshly. That girl is none of your business. And even if she could be, it’s no use. 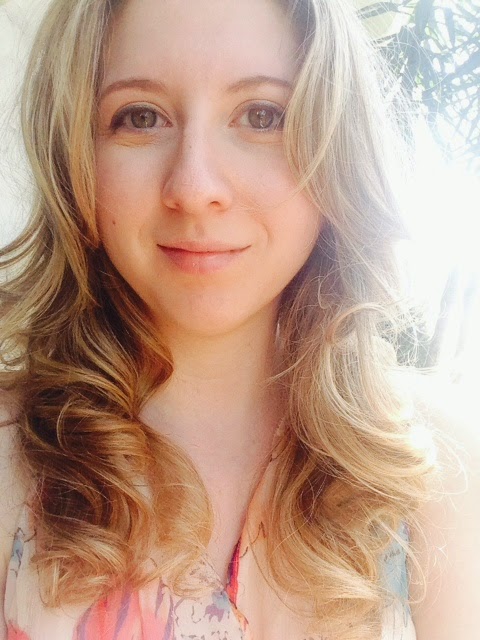