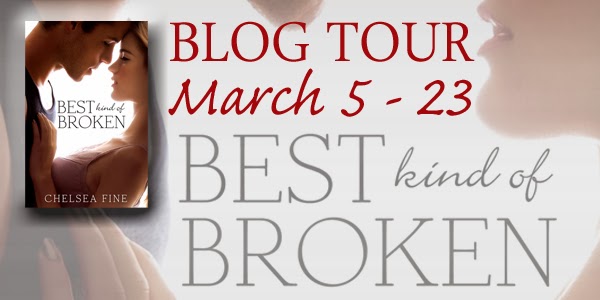 Today is my stop on the blog tour for Best Kind of Broken by Chelsea Fine. I really enjoyed this one and I'm excited to share my review and a giveaway with you.

~Synopsis~
Pixie and Levi haven't spoken in nearly a year when they find themselves working―and living―at the same inn in the middle of nowhere. Once upon a time, they were childhood friends. But that was before everything went to hell. And now things are... awkward.

All they want to do is avoid each other, and their past, for as long as possible. But now that they're forced to share a bathroom, and therefore a shower, keeping their distance from one another becomes less difficult than keeping their hands off each other. Welcome to the hallway of awkward tension and sexual frustration, folks. Get comfy. It’s going to be a long summer. 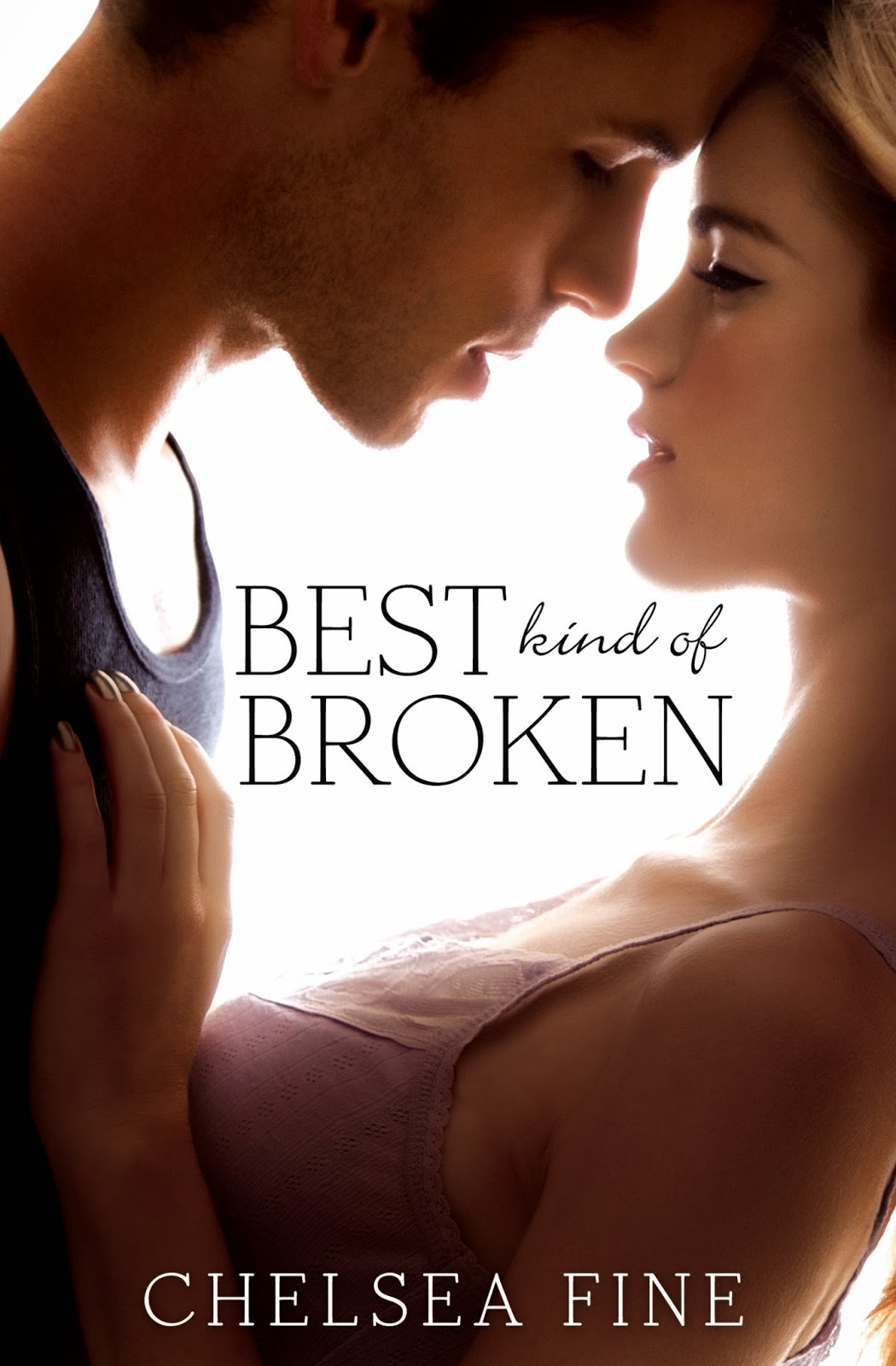 Before I started blogging, I discovered Chelsea Fine’s Archers of Avalon series and I was in love with the books! She has a fantastic writing style and I think she continues to write amazing stories. I definitely felt like she brought her A game with Best Kind of Broken and while it started out a little slow for me, it did pick up and when it did, I really liked it.

Levi and Pixie have known each other their entire lives and there has always been something between them. However, when they are both struck by tragedy, they pull away and each blame themselves for what happened. Stuck in close quarters together, the sexual between them is electric and the more they both fight their desire, the hotter things get.

I think Pixie and Levi have this great banter with one another and it definitely helped showcase the tension between them. I was laughing when Pixie threatened to pee on his bed for using all the hot water. I felt like the author really did an excellent job of mixing some humor with a bit of tragedy and sadness. There is clearly some real sorrow and pain that Levi and Pixie share and that definitely comes between them. Instead of talking to each other, they avoid the subject and each other. Levi carries guilt and doesn’t feel like he deserves Pixie. On the other side, Pixie also blames herself but she carries some anger towards Levi for abandoning her when she needed him the most.

I felt like the sexual tension was done really well in this book and you know an author does an amazing job when you just want to scream at the characters. I had my fair share of frustrating moments with Levi and Pixie. They were both living in the land of denial when it came to their feelings for each other. I really liked how honest Pixie is though, even when she can’t express herself to Levi. She goes on these little tangents and just lays it all out there and I liked that. If only she could do that with Levi. I really liked how protective Levi is over Pixie because he isn’t always the best at showing how much he cares for her but when his protective side comes out, it’s obvious.

I really liked Ellen and Haley and Mable and everyone at the Inn. They are really caring and supportive of both Pixie and Levi, which is something they both really need in their lives. Pixie’s mom is awful and I felt so bad for her that she had to have that lady as a mother. She is so nitpicky and unsupportive. She is bitter and just generally unpleasant. I was proud of the way Pixie stood up to her and finally gave her a piece of her mind.

Overall, I really did enjoy this book. I felt like the plot flowed well together and the characters were very well developed. I liked both Pixie and Levi and I really felt the connection between them. They are both broken and neither felt like they could be healed or deserved the other. I really did enjoy watching these two find their way back to each other and diffuse the sexual tension that flowed between them. 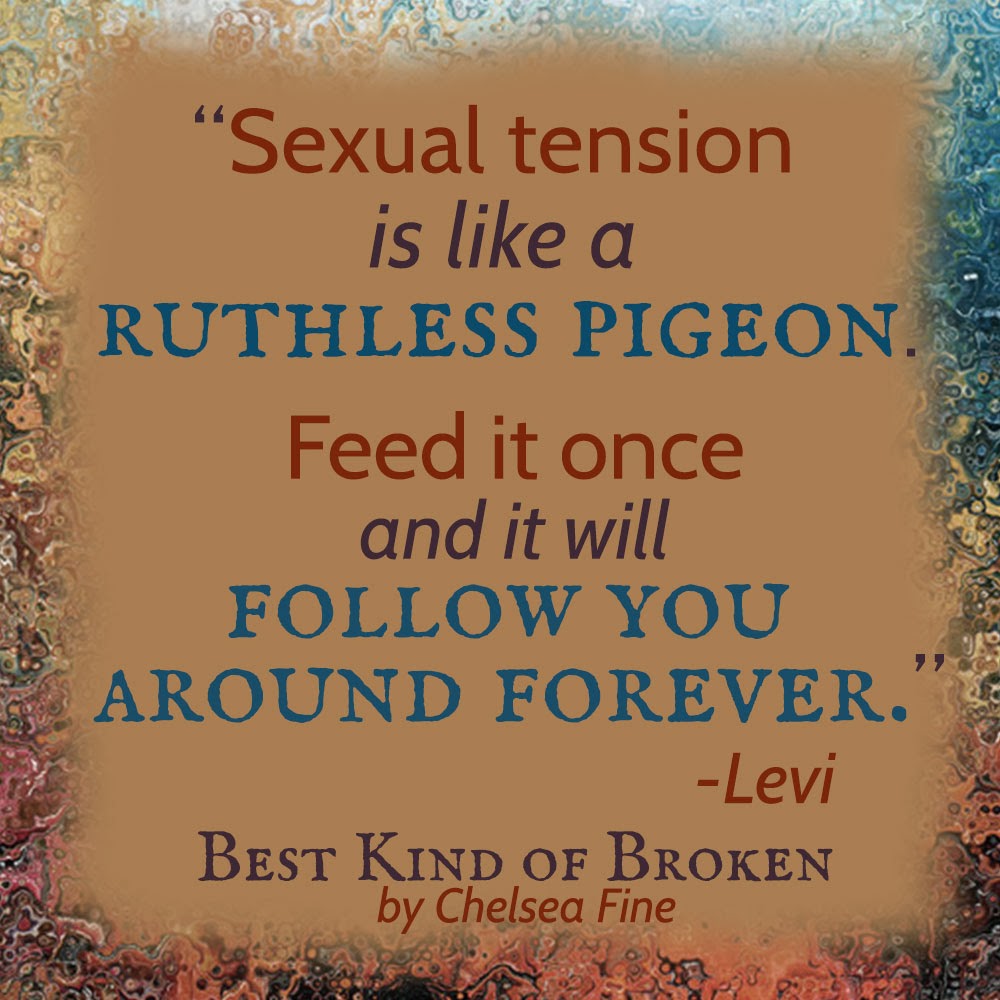 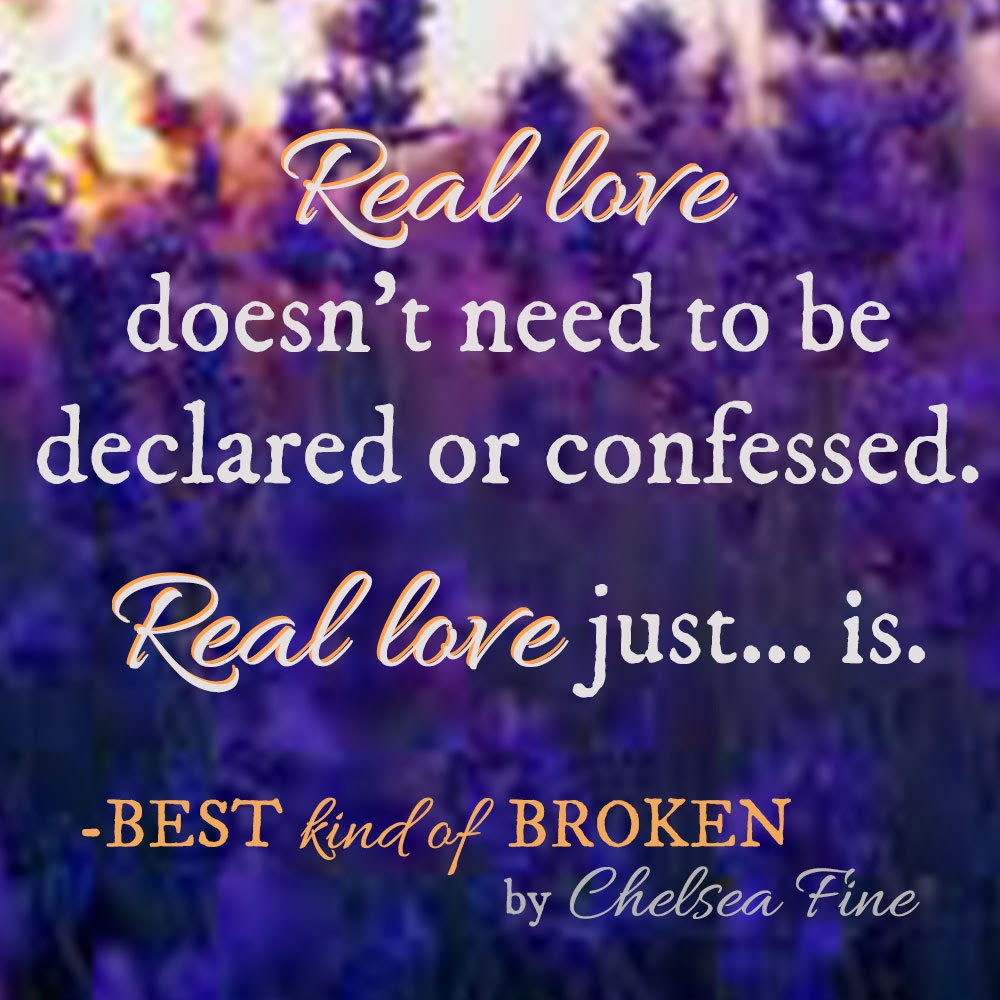 Praise for Best Kind of Broken 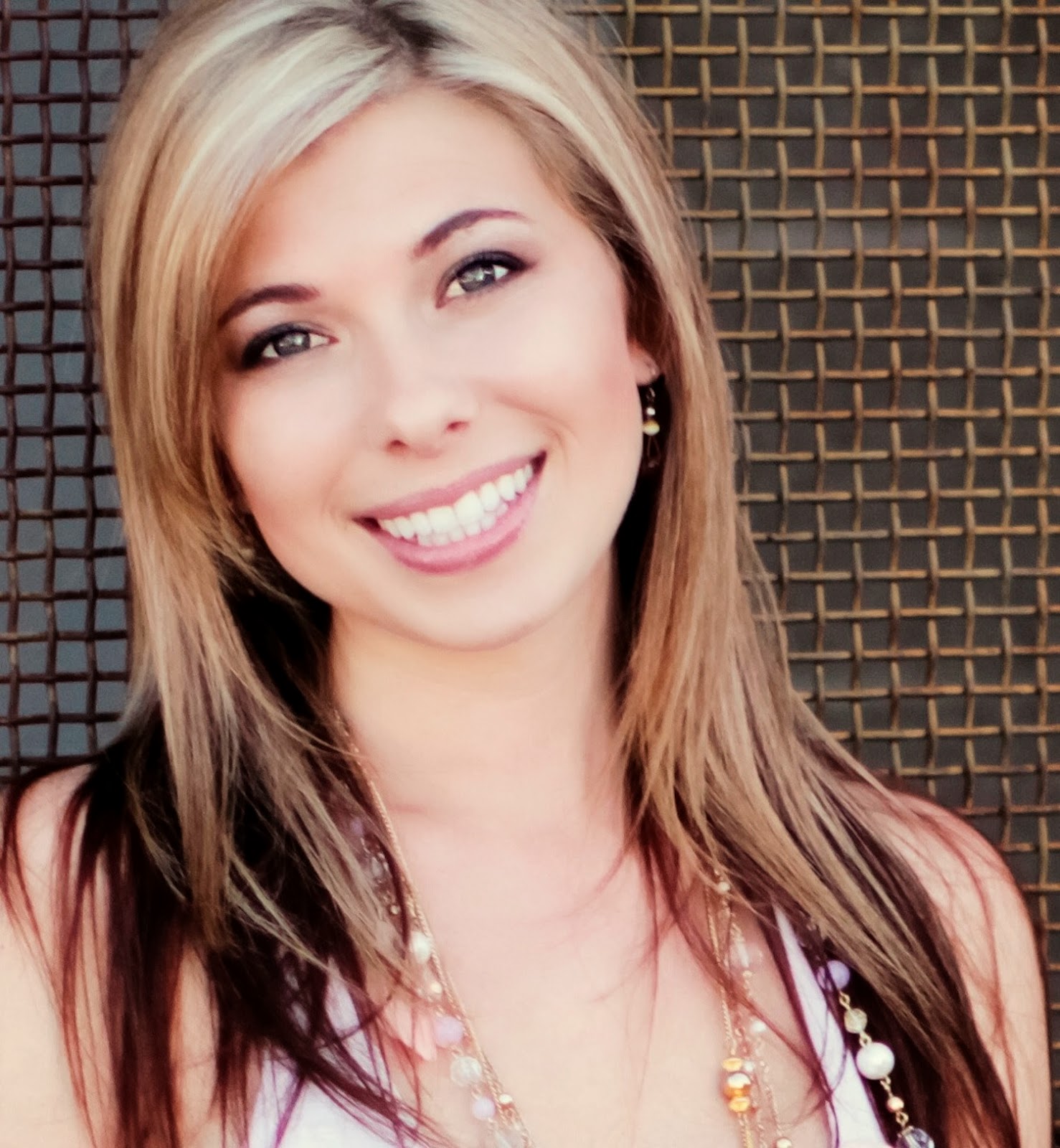 Chelsea lives in Phoenix, Arizona where she spends most of her time writing stories, painting murals, and avoiding housework at all costs. She’s ridiculously bad at doing dishes and claims to be allergic to laundry. Her obsessions include: superheroes, coffee, sleeping-in, and crazy socks. She lives with her husband and two children, who graciously tolerate her inability to resist teenage drama on TV and her complete lack of skill in the kitchen.
Links: 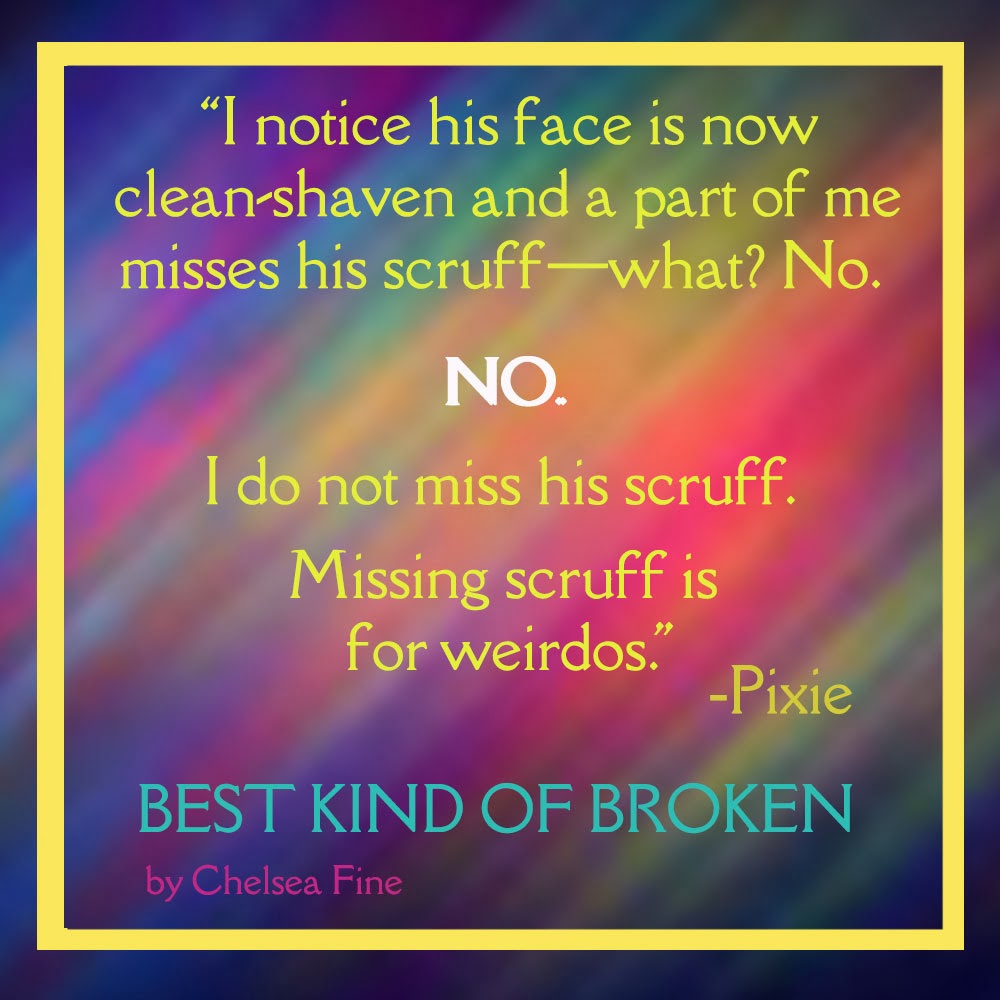 March 7
Once Upon A Twilight-Review Only
Mrs. Leif’s Two Fangs-Excerpt
Mean Girls Luv Books-Review Only