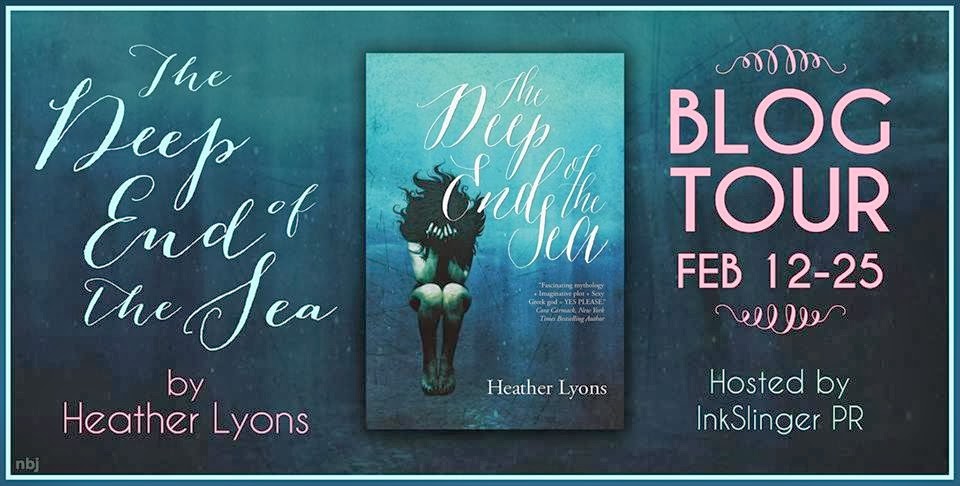 Today is my stop on the blog tour for The Deep End of the Sea by Heather Lyons, hosted by Inkslinger PR, and oh man, I am so excited to be on this tour. I freaking adore Heather and this book was incredible. Check out my review and the guest post with Heater below and also enter the giveaway!

~Synopsis~
What if all the legends you’ve learned were wrong?

Brutally attacked by one god and unfairly cursed by another she faithfully served, Medusa has spent the last two thousand years living out her punishment on an enchanted isle in the Aegean Sea. A far cry from the monster legends depict, she’s spent her time educating herself, gardening, and desperately trying to frighten away adventure seekers who occasionally end up, much to her dismay, as statues when they manage to catch her off guard. As time marches on without her, Medusa wishes for nothing more than to be given a second chance at a life stolen away at far too young an age.

But then comes a day when Hermes, one of the few friends she still has and the only deity she trusts, petitions the rest of the gods and goddesses to reverse the curse. Thus begins a journey toward healing and redemption, of reclaiming a life after tragedy, and of just how powerful friendship and love can be—because sometimes, you have to sink in the deep end of the sea before you can rise back up again. Wow.. just wow! When I finished this book, I was left speechless. I am such a fan of Heather’s writing and from the very beginning, this book was so hauntingly beautiful. I say that because it had this tone that just immediately melted my heart. I was instantly invested in Medusa and this other side that no one has ever explored. Legend is, she’s a murderous monster but they portrayal that Heather does is the exact opposite and I LOVED it.

Medusa has drawn the short stick and been dealt one crappy hand when it comes to life. Through no fault of her own, she is cursed to an immortal life with a reptilian body, snakes on her head and eyes that turn anyone who looks into them to stone. I can’t imagine how lonely she must have been and it was clear that killing people was devastating to her. She didn’t want to be a monster. She didn’t want to be a murderer and yet it was unavoidable at times.  She truly just wants to be a normal girl who gets to travel and have friends and fall in love. Fortunately, she isn’t completely alone. She has 2 friends that visit her on her lonely island; an elderly blind man and Hermes.

Oh Hermes. He is incredibly sweet, sexy, charming, devoted and did I say sweet? I seriously love this guy and once again the way Heather portrayed his character in a completely different way than the normal legends. His support of Medusa and the lengths he goes to help her and be with her was incredible. I was in love with him the moment that we met and I was head over heels by the end. It was so obvious how much he adored Medusa and I wanted to shake that girl for being so oblivious to his affections. At the same time, it made me so sad that she was so low in self-confidence and so jaded that she couldn’t recognize Hermes’ feelings. However, I give her credit for being brave enough to share her feelings with him when she realized she loved him. Realizing he felt the same way gave her the confidence she needed to believe in herself.

"This must be what odes were written about, infinte movies attempt to depict, books desperate to describe-- the perfect, exquisite sensation of lust and love all rolled into one."

I freaking loved the way Heather depicted the Gods in this novel. It’s so different from any legend that I was used to. Hades was wicked awesome in this book and genuinely one of my favorite characters. He’s not the “devil” everyone thinks he is. He may be the Lord of the Underworld but he is loving husband, a caring uncle and a compassionate man and the way he protects and cares for Medusa was so incredible. I also really loved Persephone and Aphrodite and how great they were with Medusa as well. On the flip side, Athena was one insane bitch and her unfair and malicious behavior towards Medusa made me want to drop kick her. Poisedon was bat-shit crazy and what he did to Medusa was so terrible and the delusions that he harbored about her was just insane. He took so much from her and she could have laid down and let him take it all but instead she chose to fight.

While Medusa and Hermes had this incredible passion and love story, this book was really all about the strength and growth of Medusa as a character. She had been through so many unbelievably terrible situations and the way she handled her situation and everything thrown at her was incredible. I was so impressed with her character development and growth in this novel. Never have I seen a character truly flourish the way she did and it was an incredible experience to be a part of. Heather’s writing made me feel like I was right there with her, encouraging her to be strong and fight for what she wanted. I felt all of her emotions as if they were my own and that isn’t something that comes easy.


"All I can think is, stars above, I am so incredibly blessed to have this man in my life."

When I finished this book, I really had to take a minute to just breathe. So many emotions filtered through my heart and soul and I was truly left speechless and in awe. It has been quite a while that a book has really affected me this way and I had to reflect hard on why. Plain and simple; Heather is an incredible author and the way she puts together words, the incredibly gripping plot she creates and the fantastic characters she develops is the number one reason. The spectrum of emotions that I felt as I read this book ranged from a tightness in my chest, to butterflies in my stomach to a lump in my throat and by the time I was done, I was emotionally raw but so, so satisfied.

~Guest Post with Heather Lyons~
There are lots of books out there that showcase gods such as Poseidon, Hades, and Zeus . . . but in The Deep End of the Sea, you get to know Hermes. I hope you come to love him as much as I have! Here are ten facts about the god Medusa calls her best friend, both traditional and from TDEotS.

1. While most people know Hermes to be the Messenger of the Greek gods and goddesses, he was also the god of travellers, commerce, sports, thievery, and transitions in addition to ferrying souls to the Underworld.

2. In additional to all of those jobs, he was also considered the personal agent for his father, Zeus, the King of the gods.

3. Hermes’ mother was Maia, one of the Pleiades.

4. Traditionally, one of Hermes’ symbols is the caduceus, which is a staff entwined with two snakes and topped with wings. Nowadays, the caduceus is universally recognized as a medical symbol.

5. In the Homer’s Illiad, Hermes was referred to as being a “guide and guardian.”

The Deep End of the Sea facts

6. In The Deep End of the Sea, he often serves as Medusa’s guardian (see: Homer) as well as manages to steal her heart (see: thievery), although she’d probably argue that she stole his.

7. Medusa often muses that Hermes has a bit of a knight in shining armor complex. He is always fighting to right wrongs.

8. Hermes is fiercely loyal to those he loves and values.

9. His favorite sister is Aphrodite

10. His favorite shoes are Vans. They may or may not sprout wings when nobody is looking.