We are beyond excited to bring you the first two chapters of Monica Murphy's FOUR YEARS LATER!!! FOUR YEARS LATER is a New Adult Contemporary Romance and is the final book in the Drew+Fable Series!!! It is being released on March 4th, 2014. Add it to your TBR pile ASAP! 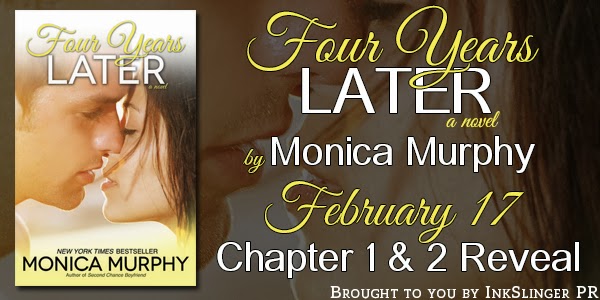 New Adult bestselling author Monica Murphy winds up her sensational series with this sexy story of two college kids with nothing in common but a bunch of baggage and a burning attraction.
Over. That about sums up everything in my life. Suspended from my college football team and forced to cut back my hours at The District bar because of my crappy grades, I can’t keep turning to my sister, Fable, and her pro-football playing husband, Drew, to bail me out. I just can’t seem to find my own way. Weed and sex are irresistible temptations—and it’s messed up that I secretly hand over money to our junkie mom. A tutor is the last thing I want right now—until I get a look at her.
Chelsea is not my type at all. She’s smart and totally shy. I’m pretty sure she’s even a virgin. But when she gives me the once over with those piercing blue eyes, I’m really over. But in a different way. I won’t deny her ass is killer, but it’s her brain and the way she seems to crave love—like no one’s ever given her any—that make me want her more than any girl I’ve ever met. But what would someone as seemingly together as her ever see in a screwed up guy like me?