In the future Dystopian society of Cabal, the government instills equality for all and offers its citizens the perfect system. There is food, shelter and jobs for everyone. The one requirement is to follow the rules without question, including the government's match in marriage and "The Day of the Chosen", a lottery that randomly selects families to conceive children as natural means hasn't existed in generations. Following her eighteenth birthday, Olivia Parker accepts her requirement to marry her childhood best friend, Joshua Warren, and is eager to start her work assignment and new life when it all comes abruptly to an end as she's arrested and thrown in prison. The only crime committed, her existence. Olivia is unlike the rest of the world born not from "The Day of the Chosen." The truth haunts the government and puts her life in grave danger as one simple fact would destroy the perfect system. With Joshua's help, Olivia breaks free of prison and is forced on the run. Together they set out to find the promised rebel town in search of a new home and new life together. Their situation seems less than promising as they reach the town of Haven. New rules and customs must be adhered to in order to stay. Leaving would mean most certain death in the large expanse of the Gravelands. Time is running out as the government mounts an attack to destroy Olivia and bury her secret with her. Thrown into a world unlike their own, they must quickly adapt to survive.
~Review~
I have spent the last few months mostly reading new adult and contemporary romance novels so Aberrant was the first dystopian I have read in a while and it was a nice change of pace. I really like dystopians and this book didn't disappoint.

The beginning makes it seem as though it will be a romance dystopian as society requires them to get married at 18, right after graduation and their spouse is chosen for them. However, it quickly becomes action-packed and it is clear that it is more than just a romance. I am more of a fan of action dystopians than romance so I was hooked as soon as the action began.

The book is written from the point of view of Olivia Parker and she is the main heroine. Olivia is very important to both the controlling government and the rebel cause. She is very unique and both sides desperately need her.  She wasn't afraid to speak out and let people know exactly what she was thinking or feeling. I liked that she wanted to control her own life and she doesn't really know who to trust but she knows she can really trust Josh.  Josh is not as strong of a character as Olivia. I liked him, then I didn't like him, then I liked him again. He was difficult to get a handle on but I liked that he cares about Olivia and will do anything to protect her. In the end, he proves himself to me and I like the direction and growth of his character.

Overall, I felt like Aberrant started out a little slow but quickly became intriguing and action packed. It has a unique dystopian plot and I really liked the direction that the author took the story. It was very unpredictable and I really like the characters so far. I felt like a few parts may have been a little rushed and that the author could have added a little more depth and made it a little longer. However, this did not take anything away from the book and I was still very captivated to the very end. I am really excited for the next book to come out and to see where the author takes the story. I feel like this could become a little more new adult and I would love to see that because most dystopians are young adult and it would be interesting to read a more adult dystopian novel. It was not left on a cliff-hanger but there are definitely a lot of questions left to be answered.

~Quote~
"My stomach shifted in waves, and my skin grew ashen and clammy. My hands trembled as I tried to stay strong, but I felt as though I was failing miserably. I let my mind wander as I did my best to calm my nerves. If I had the choice, who would I choose to marry?" ~Olivia (Aberrant by Ruth Silver) 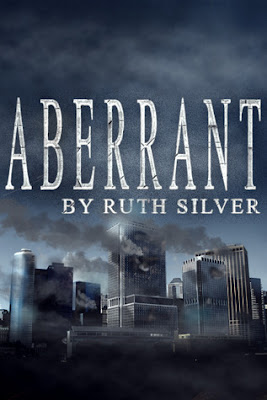 *An eBook copy of this book was provided to me by the author for an honest review. All thoughts expressed in this review are my own, unbiased opinions.*

Email ThisBlogThis!Share to TwitterShare to FacebookShare to Pinterest
Labels: Dystopian