Twenty-year-old Camryn Bennett thought she knew exactly where her life was going. But after a wild night at the hottest club in downtown Raleigh, North Carolina, she shocks everyone-including herself-when she decides to leave the only life she's ever known and set out on her own. Grabbing her purse and her cell phone, Camryn boards a Greyhound bus ready to find herself. Instead, she finds Andrew Parrish.Sexy and exciting, Andrew lives life like there is no tomorrow. He persuades Camryn to do things she never thought she would and shows her how to give in to her deepest, most forbidden desires. Soon he becomes the center of her daring new life, pulling love and lust and emotion out of her in ways she never imagined possible. But there is more to Andrew than Camryn realizes. Will his secret push them inseparably together-or destroy them forever?
Due to sexual content and language, this book is recommended for 17+ – Adult Contemporary Women’s – New Adult Fiction
***************************
I absolutely LOVED this book. For me, there is nothing like a book that has me laughing out loud one minute and tears streaming down my face the next. That is the emotional mess this book turned me into. The characters were endearing, the story was mesmerizing and the end was satisfying.

Camryn is such an incredible character who has seriously been through the ringer in her short 20 years of life. Not only has she been through so much pain and heartache, but she suffered through it all in such a short amount of time. When her best friend's betrayal pushes her over the edge, she decides to just take off on her own to gain some perspective. I would hope that I would have as much guts as she did and do the same. She is smart and not afraid to say what's on her mind. She feels nothing and is numb to life until she meets Andrew on a bus in Kansas. What can I say about Andrew except for that I love him. He is sweet and protective and freaking hilarious. The banter back and forth between him and Camryn had me laughing more than a few times. They compliment each other so well and somehow know what the other needs and provide that comfort without hesitation. They have become one of my new favorite couples.

I loved the plot of this story. It was really all about two young people who are lost in life and find the only other person that can make them feel alive again. I knew there was a little mystery surrounding Andrew but when it was revealed I really wasn't expecting it. I loved the writing in this book and how well the story flowed. It was written in dual POV but didn't have a defined structure to it and I liked that. The ending to this book was done so well and I was left very satisfied. There is a second book to come out so I was glad that I was left wanting more only to see how their story continues and not sitting on the edge of my seat from a cliffhanger. I highly recommend this book and I look forward to reading more from J.A. Redmerski.
************************
Favorite Quote:
"When I could hold my eyes open long enough, I did stare up at the rain pelting down on me. I've never looked at it like that, straight up into the sky, and while I flinched more than I could actually see, when I could see it was absolutely beautiful. Like each drop rocketing towards me was separate from the thousands of others and for a suspended moment in time, I could glimpse it and see its delicate facets. I saw the gray clouds churning above me and felt the car shake when the wind from the traffic pushed against it. I shivered even thought it's warm enough to swim. But nothing I saw or felt or heard was as warm and fascinating as Andrew's closeness." ~Camryn (The Edge of Never by J.A. Redmerski) 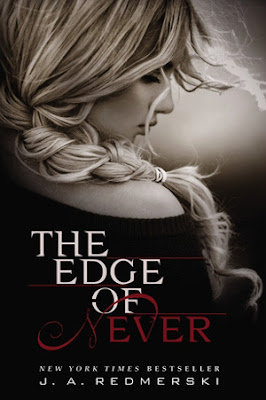 The author referenced a lot of great music in this book which I LOVED! Especially, The Civil Wars, who are one of my favorite bands. So, in my IPOD picks, I included a couple of their songs that were referenced in the book, along with my own picks.