Life outside of her house was a new experience for Della Sloane. The dark secrets of her past weren’t something she ever intended to share with anyone. They would never understand. No one would ever get close enough to find out. There was always a chance she’d go crazy sooner than they expected…Woods Kerrington had never been one to be attracted to fragile females. They seemed like too much work. He wasn’t in it for the work just the pleasure. A night full of naughty fun had been exactly what was on his mind when he’d laid eyes on the hot little number that didn’t know how to pump gas and needed some help.What he didn’t know was she was as fragile as they came.The carefree girl who spoke her mind and didn’t care what the world thought of her was more breakable than he could ever imagine…
*******************************
It has been a while since I have read and adult romance novel but Twisted Perfection has wet my appetite and definitely sent me into an Abbi Glines read-a-thon. This was my first book to read by her and now I am addicted.

I really liked Della and thought that she was a really strong character. I admired the way she could be so open and outgoing after all that she had suffered in her childhood. She was so good at standing on her own and holding herself together, despite the issues that she still held deep inside. She was so young and naive and saw the best in others, even those who didn't deserve it. She was a young girl, thrust out into the world on her own with no knowledge or experience and she handled it remarkably well. I wasn't sure how I would feel about Woods at first because he wasn't exactly introduced as a gentleman. I was also a little annoyed with how possessive he was over Della when he had no right to be. However, he was there for her when she really needed him to be and grew on me. By the end of the book I actually really liked him.

I felt like this book was really well written and the plot was very interesting. The dialogue wasn't cheesy like some romance novels can be and the added twists and turns in the plot kept if from being just another "boy meets girl, boy falls for girl" type of novel. I haven't found a romance writer that can mix sex, romance and plot so well since Sandra Brown and there is a good chance that I will be reading adult romance books for the next few weeks until I hop onto another genre obsession for a while. Be prepared to see Abbi Glines and other adult romance reviews on my blog for the next few weeks. :-)

**************************
Favorite Quote:
"I had lain awake last night thinking about packing up and leaving but in the end I decided that I was done with running. I couldn't run every time I came in contact with pain or a problem was placed in my path. It was time I reacted like the rest of the world and faced it head on." ~Della (Twisted Perfection by Abbi Glines) 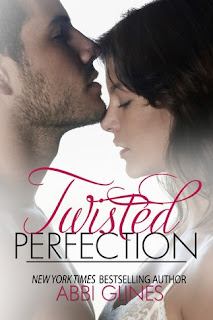 IPOD Picks:
"Between the Raindrops" by Lifehouse
"Mess I Made" by Parachute
"Chariot" by Gavin Degraw