Review: Lost in You by Heidi McLaughlin

Lost in You
Author: Heidi McLaughlin
Publication Date: May 6, 2013

Ryan Stone is a less than average teenager. He doesn’t have fancy clothes. He doesn’t carry around the latest smartphone and he definitely doesn’t have an MP3 player. Instead, he goes to school, does his chores and dreams of a new life away from Brookfield where he’s expected to follow in his blue collar family’s footsteps. Hadley Carter is America’s Pop Princess. A successful recording artist living her dream with a sold-out tour and a handful of Grammy’s there isn’t much that she wants for, except love. But finding love on the road is near impossible when all she longs for are romantic dinners, a nighttime stroll on the beach and holding hands with someone who isn’t going to exploit her. When a chance encounter introduces Ryan to Hadley, will he be like her adoring fans looking for a way in, or will it be Hadley who pursues Ryan even though it might cost her the only career she's known.
***************************
While I enjoyed reading Lost in You and it was a very cute, light read, I felt that there were parts of the story that bothered me. While I totally understand that the author was trying to write a story about following your dreams and going for love, I just couldn't fully get behind the plot.

Hadley is a very passionate character and when she wants something, she goes after it. However, I found her perusal of Ryan a little obsessive . She meets him and has this instant connection, but then I think she comes on a little too strong. Since she is older and a woman, I want to say she would have better sense but I know that isn't necessarily true. Another issue I had with her were the mixed signals that she kept sending. I felt like she really messed with Ryan.

I found Ryan to be kind of a weak character in the beginning but he did really develop well throughout the book. His experience with Hadley was very new to him and he discovered things about himself during their relationship. Even though his separation from Hadley was heart-breaking for him, it actually made him much stronger. His friendship with Dylan was a saving grace for him and even though I felt like she was a little manipulative, he was lucky to have her in the end.

Overall, I think this book was really well written and I think the author did a good job of illustrating the idea that you should take risks to fight for what you want. However, Hadley's strong perusal of Ryan, only to so quickly desert him was bothersome for me. I know it was hard for her but I felt like she gave up too easily. I was satisfied with the conclusion of their story but not sure I liked the way the final chapter played out.
*********************************
Favorite Quote:
"When he looked at me, my heart began racing so fast I thought I was going to pass out. Different from the exhilaration I feel on stage. This is real, like the sun shining on just the two of us, our hands a magnetic force field bridging the gap." ~Hadley (Lost in You by Heidi McLaughlin) 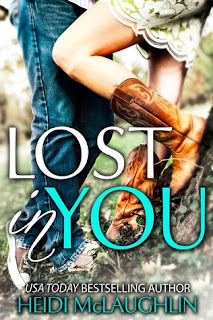 IPOD Picks:
"Breakaway" by Kelly Clarkson
"When a Heart Breaks" by Ben Rector
"Mess I Made" by Parachute