Secrets never stay in the past.The night before high school graduation changes everything. Lies are told. Mistakes are made. Secrets tucked away. Lives are changed in the span of a few hours.A year later, Haley is still reeling, numb with the constant ache of guilt. She's in a place she never expected to be: lost without her friends and Seth. Until he enters her life again, dredging up everything she's trying to forget. Everything about that night.Seth returns to his hometown determined to share his truth, his side of the story. He desperately needs to make things right with Haley, even if it means losing her forever. Because the truth will ruin any chance of her ever loving him again.
************************
Every Little Piece was definitely a story that pulled at the heartstrings. It was a really intense and deep story. I really liked this book but it was a little depressing, not that it is a bad thing, but it just got me down a little.

Haley went through some serious loss and tragedy in such a short time and at such a young age.   I don't know how I would have handled a similar situation at her age. I think that she thought leaving was the only way to forget but she felt so guilty that she never let herself forget or move on. She became a shell of herself and no amount of distance would have changed that. Instead of avoiding and wallowing, she needed to confront the situation and forgive herself.

Seth played a huge role in Haley's downfall and he took the coward's way out. He abandoned her when she needed him the most. I understand that he was young and had been through a huge tragedy and he thought leaving was the best solution. However, if he had stayed, he could have helped Haley move on. His year away did give him perspective and he came back to right his wrongs and help Haley to get past some of her grief and guilt.

This book was well written, especially from a debut author, and the plot was well thought out and well rounded. I liked that the author really built up the characters and the plot before tragedy struck. It made the tragedy that much more heart-breaking. She also touched on the subject of grief and guilt very well and very realistically.
******************************
Favorite Quote:

"A new wish flutters about, a butterfly with wings of hope, rising from the ashes of my life. I've been given a gift. One I never expected to receive." ~Haley (Every Little Piece by Kate Ashton) 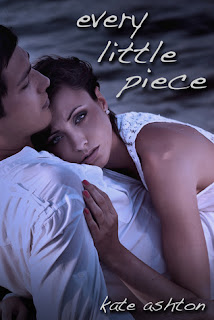 IPOD Picks:
So the author, Kate Ashton, actually made a playlist for this book that is at the end of the book and some of her picks are on my IPOD so I am going to list those below for my IPOD picks because they are perfect but I want to give the credit to Kate.

For her full playlist, check it out at the end of Every Little Piece.