I live in Blackbrooke and you would have had to be living under a rock to never have heard of it before now. This town is different to most others…Humans aren’t the only residents…”The residents of Blackbrooke share their town with the Creatures, or Crits as they are known. Grotesque, roaming the streets at night looking for food, their presence means humans have to live by the Rules, keeping them indoors and forbidding them of basic desires.The most important Rule?Don’t be a ‘walk out’!Straight-A student, Liberty Connor, hates the Crits and the endless Rules she and her tight knit group of friends have to live by.Planning her new life on the Outside with her boyfriend, Gabriel, Liberty whiles away her days waiting to turn 18, so they can leave and be free. That is, until the world she thinks she knows begins to unravel…Her friends start to walk out. So she’s told. However, something’s not right. Things don’t add up.Liberty faces a race against time to discover what’s going on with the Creatures of Blackbrooke.Is it them she has to fear, or something much closer to home?Blackbrooke is a Young Adult horror novel that has you on the edge of your seat

I really enjoyed the main character, Liberty and felt like she was a really well written character. She was smart and a stickler for rules but she wasn't annoyingly uptight. She was a good friend and strong enough to admit when she was wrong. She loved passionately and would do anything for those she loved.

Blackbrooke was an interesting town set in the modern day but with very unique laws or "rules" for the citizens to keep peace with the Crits, which are viscous monsters that live in the woods surrounding the town. When Liberty and her friends discover that there is more going on than the adults have been telling them or lead them to believe, they set out to discover the truth and change their lives.

I found myself laughing one minute and on the verge of tears the next. The author does an amazing job of creating mystery and keeping the reader on their toes. There were so many unexpected twists and the cliffhanger at the end left me on the edge of my seat. The book is well written and an exciting read. This is the first of a trilogy and I can't wait to read the rest. 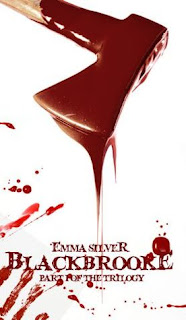 IPOD Picks:
"Anna Sun" by Walk the Moon
"Young Blood" by The Naked and Famous
"Wake Me Up Inside" by Evanescence

A copy of this book was provided to me to read and review. All thoughts and opinions expressed in this review are my own and unbiased.
Posted by Unknown at 8:33 AM