"So what was your name before?" I say, and she freezes, her back to me. "Before you came to the Wilds, I mean."For a moment she stands there.Then she turns around."You might as well get used to it now," she says with quite intensity."Everything you were, the life you had, the people you knew... dust."She shakes her head and says, a little more firmly, "There is no before. There is only now, and what comes next."After falling in love, Lena and Alex flee their oppressive society where love is outlawed and everyone must receive the "cure" - an operation that makes them immune to the delirium of love - but Lena alone manages to find her way to a community of resistance fighters. Although she is bereft without the boy she loves, her struggles seem to be leading her toward a new love.

****************************************
I was happily surprised by Pandemonium and how much more I liked it than Delirium. In Delirium, I didn't care for Lena and felt like her character was un-evolved. However, there was a complete turn around in Pandemonium. It begins several months after the escape and then alternates between now and then. We get glimpses of who Lena is now that she is living in Brooklyn, part of the revolution and disguised as a cured and then glimpses of what she experienced to become that person. She is so much stronger in this book and she truly transforms into a new character.

There were also several new characters introduced, including Julian, who is the son of the head of the DFA (Deliria Free America). He is not yet cured and he and Lena are thrown into a dangerous situation that brings them together. I liked Julian and the fact that he was very similar to Lena before she met Alex. However, Julian evolves so much more than Lena did as an uncured who believed in the society before falling in love. It was obvious that Julian had his doubts to begin with and didn't truly believe in what he and his father were preaching.

I wasn't surprised by the ending even though it was supposed to be a shocker but I did feel like it was a heavy cliffhanger that made me want to start reading Requiem right away to see how this all played out. Overall, Pandemonium was definitely a step up from Delirium and the author did a wonderful job of strengthening the characters, especially Lena, as well as the plot and theme of the story. 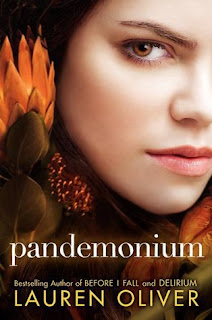