In the future, only one rule will matter:Don’t. Ever. Peek.Seventeen-year-old Ari Alexander just broke that rule and saw the last person she expected hovering above her bed — arrogant Jackson Locke, the most popular boy in her school. She expects instant execution or some kind of freak alien punishment, but instead, Jackson issues a challenge: help him, or everyone on Earth will die.Ari knows she should report him, but everything about Jackson makes her question what she’s been taught about his kind. And against her instincts, she’s falling for him. But Ari isn’t just any girl, and Jackson wants more than her attention. She’s a military legacy who’s been trained by her father and exposed to war strategies and societal information no one can know — especially an alien spy, like Jackson. Giving Jackson the information he needs will betray her father and her country, but keeping silent will start a war

This was an exceptional book. I loved the plot and the premise of the story. Set in the future where earth was destroyed and then brought back to life by an Alien race with a peace treaty that allowed the Aliens to get what they need from humans in exchange for helping Earth remain livable.However, nothing is what it seems and the two races are on the brink of an epic war.

Ari is a human girl and the daughter of the human's commander. She is such an awesome character. She is super strong and wants to prove that she can be a great leader on her own, without the help of her father. Jackson is an "Ancient" (alien) and Ari has always thought of him as just her competition and held no interest in him until she finds out who he really is. When they start working together, she sees a completely different side of him, the real him and she can't help but fall for him. I think Jackson has always felt something for Ari but never let himself show it because of who they both are. I loved that even though he knows she can take care of herself, he is always trying to protect her. I also liked that that while Lawrence and Gretchen are side characters, they were both very strong, and you grow and attachment to them as well. There could easily have been a love triangle in this book and I am so glad that she didn't take it in that direction.

I absolutely loved this book! This is Melissa West's debut novel and it was exceptionally written. I was enthralled from the minute I started reading it. I did not want to put it down until I finished. It was action packed and thrilling. She so expertly inserted twists that I could not have predicted and did not see coming. I also loved that she didn't end it on a huge cliffhanger but left just enough intrigue that I wanted to know more. My only disappointment is that I have to wait until August for the second book, Hover. Well done Melissa, well done. 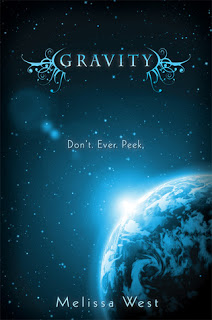 IPOD Picks:
"Try" by Pink
"It's Time" by Imagine Dragons