Nothing makes a new school suck worse than discovering the guy you’re in love with is your prophesied nemesis.Ari is the most powerful flame-throwing sorceress ever, and her people’s last hope in an ancient war. But she’s also a seventeen-year-old girl, and in her free, not-hunting-nemesis times, she jumps from school to school, trying to figure out regular people her own age and pretending she’ll get the chance to graduate.Shane lives a double life. He goes to school and masters the art of popularity, hiding the fact that he has a fate with a slim chance of his survival. He’s destined to end a 300 year-old war by killing or being killed. He knows he’s hunted by a powerful enemy who’s not afraid to die. Only problem? He has no idea who that enemy is. When Ari shows up at Shane’s school, angry and sullen and determined to keep him at arm’s reach, neither of them realize they are supposed to be killing each other, not fall-ing in love. Until Ari does realize it, and she almost dies – by Shane’s hand

***********************************
The main characters, Ari and Shane, are the two most powerful sorcerers and are the prodigies from warring clans. According to a prophecy, one must kill the other in order to end  a century old war. However, neither knows who the other one is. Ari ends up enrolling in the same boarding school that Shane attends they instantly form a friendship that soon leads to deeper feelings. Ari has to deal with her cruel grandfather who threatens her mother to get her to do what he wants. She hates fighting and feels like a monster but she does his bidding to protect her mother.

Ari is a strong girl but she is very closed off. She does not trust anyone except maybe her brother and she has spent most of her childhood being raised to fight and kill the other prodigy. It was nice seeing her character develop and begin to open up and let people in. Shane is the exact opposite of Ari and is very open and laid back. He is a ladies man and the best looking guy in school. He instantly feels different when he meets Ari and I liked that he gave Ari space and time to develop  her feelings and trust him while still holding true to his feelings for her.

I really enjoyed reading this book. It is the debut book for Wendy Knight and I thought she did a great job. The characters were very likable and the plot was well thought out and flowed nicely. It took me a few chapters to get into and there were a few times when the transition between characters confused me but overall I liked it. Once I got into it, I couldn't put it down and finished it in 2 days. While this seems like it would be a love story, there was actually a lot of action. 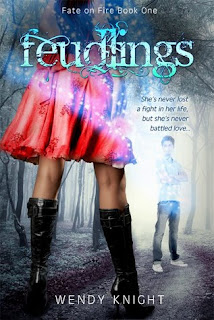 IPOD Picks:
"Catch My Breath" by Kelly Clarkson
"Let Me Love You" by Neyo
"Under Pressure" by Queen