Today, I have the tour for Covert Assignment by Missy Marciassa, hosted by Xpresso Book tours, on the blog. Check out my review below.

~Synopsis~
Covert Assignment is a New Adult, Coming of Age Novel with a strong romantic element. Elle is ready for graduation and full-fledged adulthood: no more living like the leftover of her parent’s divorce. She’s about to graduate with her degree in Information Science (the 21st century term for Library Science) and has a ten-year plan as well-designed as any model for analyzing metadata: earn her JD/MBA, enjoy a couple of years as a single professional, then marry her college sweetheart, Adam, and start her own family.

Yet Elle feels like she returned to an alternate universe her final semester. There are pictures of Adam with a classmate who must be surgically enhanced, but he insists he wants Elle. CIA recruiters show up on campus, and they aren’t just interested in recruiting Elle for future employment: turns out she’s already working for them since they’re funding her thesis. Hot operative Preston Raddick is tasked to work with her. Preston isn’t just hot: he’s hot for Elle, but is he offering happy ever after or happy for right now? A fling with Preston could be the beginning of a new life plan, which is exciting and scary, especially with espionage thrown in. Elle needs a predictive model to tell her which decisions have the greater likelihood for happiness…

Covert Assignment is about the unexpected turns life can take when making “adult” decisions. 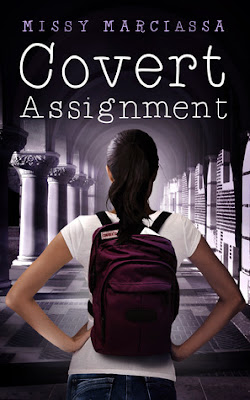 Covert Assignment was a really fun and enjoyable read. I liked the steam in the romance as well as the intrigue within the plot. I was actually quite hooked from the beginning and while I felt like there were a few parts that could use a little more development, I was generally very happy with this book.

Elle has her whole future planned out and she is 100% focused on that future. When she returns from winter break for her final semester of her senior year, all of her plans are turned upside down, starting with her boyfriend cheating on her. I liked Elle and thought she was a really strong character. She adapted well to change and she didn’t just forgive Adam because he fit into her plan. She really tried to forgive him because he genuinely seemed sorry and they had been together for so long. However, Preston opened her up a little to the idea of experiencing something different and when Adam screwed up again, she allowed him to do just that.

Elle had some really good friends in Marni and Tina and I loved how they supported her. They were like Yin & Yang, the angel and the devil and it was good that she had them always with opposite views because she was never pressured one way or another. No matter what advice they reaped upon her when it came to  her career and her love life, it was always her decision. I was always really happy she had them as friends because everyone else who was supposed to love her just let her down. Adam cheated and lied and really hurt her. He was such a dick too because he tried to justify his actions and really thought so poorly of Elle that she would just forgive and forget like she couldn’t do any better. Her parents were also a piece of work and their lack of interest in Elle’s life unless it was what they wanted made me really sad. I was really proud of Elle for standing up to them in the end however and finally realizing that she’ll never please them so why bother trying.

One of my favorite things about this book was the chemistry between Elle and Preston. I was so hot and leaked off the pages. They are working together but they can’t help be attracted and what they are doing is exciting and a bit thrilling and dangerous. This definitely brings out the sexual tension. Elle is still a good person though and never acts on her attraction while trying to give Adam a chance. However, when he breaks her trust again, she doesn’t hold back and she lets Preston show her what real passion is. While Preston never did anything to hurt Elle, I still got the “player” vibe from him and I was worried that she would get too attached and he would inevitably break her heart. They had some sexy, sexy times though and being with Preston opened up a new side to Elle that made her a better, stronger person.

While I found the plot to be a little far fetching, it was still intriguing and fun. I actually understood that the book is more about being open to change and allowing yourself to grow and mold. Elle had plans but she was also open to new opportunities that came her way.

AUTHOR BIO
Missy Marciassa loved getting lost in novels from the time she could read, so it’s no surprise she wanted to write. Her very first “novels” were re-writing the books she read to get the endings she wanted in second grade. Missy continued to read and write through grade school and high school.

After becoming rather disillusioned with fiction after writing literary criticism as an English major in college, however, Missy focused on her enjoyment of learning about people and studied psychology. Reading fiction fell to the wayside with all the reading and writing required for college and graduate school, but once Missy became a doctoral candidate, she rediscovered her love of fiction. Then she started getting the urge to write, an urge that wouldn’t go away (she refuses to diagnose it as a compulsion). Covert Assignment is the end result of that urge.