Review: The Opportunist by Tarryn Fisher

~Synopsis~
Olivia Kaspen has just discovered that her ex-boyfriend, Caleb Drake, has lost his memory. With an already lousy reputation for taking advantage of situations, Olivia must decide how far she is willing to go to get Caleb back. Wrestling to keep her true identity and their sordid past under wraps, Olivia’s greatest obstacle is Caleb’s wicked, new girlfriend; Leah Smith. It is a race to the finish as these two vipers engage in a vicious tug of war to possess a man who no longer remembers them. But, soon enough Olivia must face the consequences of her lies, and in the process discover that sometimes love falls short of redemption. 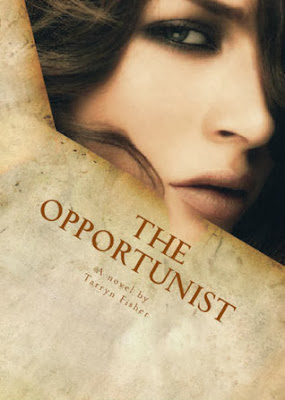 Wow, this book, yeah I was at a loss for words when I finished. I'm not gonna lie, this book made me mentally insane and it was a total mind fuck. But you know what? I couldn't freaking put it down. I was so glad I read this with some other girls while chatting on Twitter because this was a discussion worthy read. I don't normally use GIFs in my reviews but this was how I felt when I finished this book at 2:00 AM.

This book is called The Opportunist for good reason. Olivia really earns the name and I'm not gonna lie, I kind of think she's a little bit psycho. Olivia has been heartbroken since she and her boyfriend broke up 3 years ago. When she sees him again and he has amnesia and doesn't remember who she is, she sees an opportunity for a little more time with him and that bitch latches on. At first, I felt this anxious flutter in my gut because it was obvious that Olivia loved Caleb so much and whatever she did to drive him a way was eating her alive. As it flashed back between the past and the present, I started feeling less and less sorry for her and more and more disdain. I started wondering what more she could have possible done to procure this poor guy.

I liked Caleb, at first. He may have had amnesia but he seemed like a really nice guy. There was something that drew him to Olivia even though he already had a girlfriend, Leah. I'll get around to that batshit crazy chick in a minute. Caleb didn't seem to want to hurt Leah but he NEEDED to get to know Olivia. Clearly they had an undeniable chemistry that wouldn't go away no matter how many years they are apart or how many amnesiac episodes ensue.  All my tingly feelings for Caleb were snuffed out as the story unfolded and delved more into the past. It became clear that Caleb was no innocent bystander in this crazy love affair. He is clearly a narcissist and I don't think he is completely blameless in everything that went down between him and Olivia.

The plot of this book was fascinating. It alternated between the present and past as Olivia remembered how she fell in love with Caleb and the demise of that relationship as she desperately clung to him for more time in the present. However, when the book hit 70%, I was doing this:

And then I proceeded to make that same exact face several times throughout the final 30% of the book. I was slammed with more WTF moments than my brain could take and I am pretty sure I teetered on the edge of sanity by the end. I was super impressed by how convaluted the plot had become and how utterly insane the characters were. This book turned into an all out soap opera and the drama that took place rivaled that of the Real Housewives (insert whatever city your heart desires). Leah is unbeliavably evil and manipulative. She definitely knew how to play the game and she played it hard. Even Olivia, who is a bit of a pyscho, looks like an angel compared to Leah. She always gets what she wants and she made damn sure that it would happen.

My biggest disappointment with this book was the fact that Caleb was just as much to blame for the end of their relationship but he put all the blame on Olivia and took no responsibility himself. Is Olivia a little bit crazy? Yes. Did she do some stupid, immature shit? Absolutely. However, she clearly has some insecurity issues stemming from her dead beat dad and Caleb was too self-involved and to really SEE them, even though he pretended to understand. One thing that impressed me in the end though, was how mature Olivia actually acted. She finally made one good decision and even though it was the hardest one, she did the right thing.

Overall, this was actually an expertly written book but I did waver back and forth on my rating for this  one because of the craziness that it was. I loved the writing and the inner dialogue and one-liners were highly entertaining. However, I can't think of a single character that I actually liked in this book. They all have some serious issues and should probably be locked in a padded room together. I will say this though, the realism of the characters is refreshing and as my friend CeCe @ Steaming Mug of Books pointed out in our twitter chat, the fact that the characters are so flawed is what makes them more real. The ending was a bit surprising but it's only book one in a continous series so you know there's no HEA for these two, yet. I'm a bit nervous to read Dirty Red since the story continues from Leah's perspective and she's my most hated character of them all. I kind of fear for my mental stability when I get to that one.