Today, I have the pleasure of featuring Melody Grace on the blog! She has just released her Christmas novella, Unwrapped and I am sharing my review as well as Melody's holiday playlist. Check it out below!

Lacey James is wild, spontaneous and up for anything.
Daniel Sullivan is careful, sensible, and mending his broken heart.

It’s a match nobody saw coming, but when the unlikely pair get stranded together on the way home for the holidays, Lacey finds her long-term crush impossible to ignore. As the snow keeps falling, and a friendly game of truth or dare gets way out of control, Daniel discovers that the one girl he wants more than anything is the last person he expected.

But when the snow melts, will their night together be more than just a memory? And will they make it to Beachwood Bay in time for the wedding? Anything can happen this holiday season! 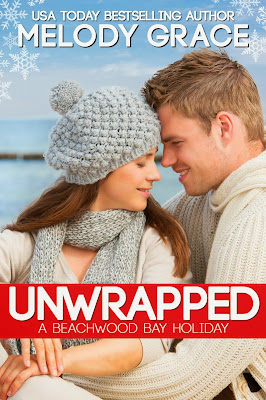 If you know me then you know I love all things Melody Grace and Beachwood Bay is one of my favorite places to visit. Even  though this is just a novella, it really packed a punch and I loved the quick trip to Beachwood Bay for the holidays. Oh yeah, and Emerson and Jules wedding of course.

Lacey is living in LA now trying to make it as  designer to the stars. Things aren’t going quite the way she planned and she’s catching the cheapest flight out to Georgia for Jules’ and Emerson’s wedding. While racing to catch her flight, she runs (literally) into Daniel, Jules’ ex-fiance and the subject of her unrequited crush. They end up on the same flight, seated next to each other and then later stuck in a snowstorm in Atlanta. Sexual tension rises and things get real steamy. Is it just one night of passion or is something more brewing between these two?

I really like Lacey and I think she is a good friend. She didn’t quite understand Jules’ decision in Unbroken until she realized the love she had for Emerson. She thought she was crazy for leaving Daniel for a guy that had ripped out her heart. However, she could clearly see now how much Emerson really loves Jules and that they are meant for each other. Lacey always harbored a secret crush on Daniel but never felt good enough to garner his attention. She is fun, outgoing and the party girl type. While she seems confident with who she is, I think it’s a bit of a front because she feels like she can never get a good, kind, caring man like Daniel.

Daniel is all about perfection and control. He is one of the nice guys but like the saying goes, he feels like he is always finishing last. He is still mending a broken heart after losing Jules but when he runs into Lacey, Jules is the last thing on his mind. Daniel is seeing Lacey with open eyes and he’s having a really hard time being the “gentleman” he normally is. I liked Daniel a lot and I was glad to see him loosen up a bit and not be so perfect. Who knew he had such a naughty side to him?

The sexual tension between these two was intense and watching them try to deny the feelings they were having around each other was hilarious. Daniel is obviously affected by Lacey but he tries so hard to fight it. At first Lacey feels rejected but when she sees the desire in his eyes, she’s determined to get at least one night out of Daniel even if she’d like so much more. And what a steamy night they share! They have serious chemistry and I don’t think one night will ever be enough for either of them. Lacey doesn’t give herself or Daniel enough credit and immediately puts her guard back up. I needed Daniel to step up and finally go after what he wants. I was afraid he would let her go but in the end he didn’t disappoint me. I think these two are prefect for each other because they can balance each other out. Lacey has finally met a man who will treat her with love and respect and make her feel as special as she is and Daniel has met someone who can bring out the fun and spontaneous side of him. They’re a perfect fit!

While this was a quick and cute read, it was also able to bring out all the feels in such a short timeframe. I was definitely impressed with how developed this novella was and how wrapped up I became in the story. I hope we get a little bit more of Lacey and Daniel in the future! 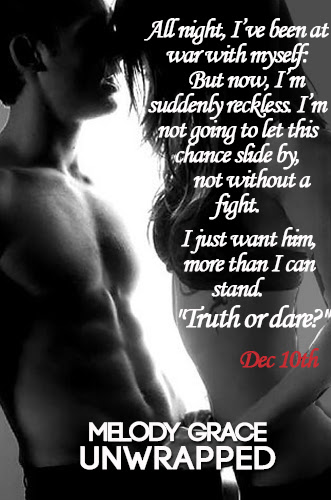 
~Melody’s Holiday Playlist~
I'm sharing my book playlist! And if this looks a lot like a holiday playlist… you're right :) So here's a mix of my holiday favorites, and a few special UNWRAPPED inspirations too.

Brandi Carlile - The Heartache Can Wait.

Lady Antebellum - Baby it's Cold Outside

Taylor Swift -- Back to December

And of course, I can't have a holiday mix without the best of all:

Mariah Carey -- All I Want for Christmas is You!

What are you favorite holiday songs?

*****************************************
Melody Grace Bio:
Melody Grace is the USA Today bestselling author of UNBROKEN and UNTOUCHED. A small-town girl turned SoCal beach-lover, she spent years with her nose in a book before deciding it was time to write them for herself. She loves bad boys, good books, and pistachio-flavored ice-cream.
Links:
Website: http://melodygracebooks.blogspot.com/
Facebook: https:// www.facebook.com/pages/Melody-Grace/329573187160227
Twitter: http://twitter.com/melody_grace_
UNWRAPPED Goodreads:
Melody Grace Goodreads: http://www.goodreads.com/author/show/6926290.Melody_Grace