Review: Snowed Over by Angie Stanton

~Synopsis~
To college student, Katie Brandt, ‘Home for the Holidays’ sounds like hell. When her parents separated, their holiday traditions shattered like a dropped ornament. What could be worse than celebrating Christmas with her suddenly single mom and mom’s new boyfriend?

Alex Walker, an engaged 20-year-old, dreads going home for his own reasons. He has a daunting task ahead of him and wishes he could skip the holidays altogether. So when a friend of a friend needs a ride north, Alex finds that having beautiful Katie seated by his side proves to be just the distraction he needs.

A simple ride home for Christmas turns into a nightmare when light snow rages into a full-scale blizzard. Katie and Alex find themselves stranded, and a vacant cabin becomes a haven from the storm.
Under different circumstances, time alone with Alex would be the ultimate Christmas gift, but Katie knows Alex is engaged and she must hide her growing attraction.

However, Alex harbors a secret that just might change this holiday from the worst Christmas ever, to the best. 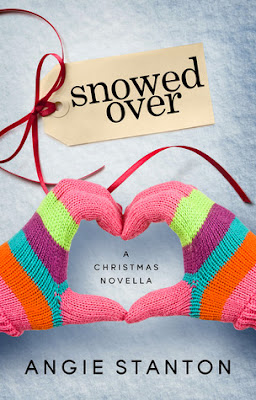 I love Christmas time and I have really enjoyed reading Christmas novellas to get into the spirit. When I read the synopsis of Snowed Over, I knew I had to read it. I love the idea behind two people with incredible chemistry stranded in a cabin together for Christmas. It screams romance to me!

Katie is headed to her mom’s new “non-boyfriend’s” cabin for Christmas and she’s not happy about it. It’s the first Christmas since her parent’s divorce and she’s not feeling the holiday spirit. She end up getting a ride with Alex, a friend of her roommate’s brother whose headed the same direction. Alex is on his way home where his fiancé still lives but he’s less than thrilled. Things aren’t so great in paradise and he’s finally ready to let go. When Katie and Alex are caught in a horrendous snow storm, they must hole up in an abandoned cabin until the storm blows over. With an undeniable chemistry between them, things are bound to heat up.

Katie is obviously hurting from her parent’s divorce and she is deeply bothered by the way her Christmas is going to go. She is frustrated with her parents, who refuse to talk about the divorce or explain to her what went wrong. I felt like she acted a little immature towards her mother but I can’t say I wouldn’t have acted the same way because of the hurt she is feeling. The holidays are a time for family and after 19 years of family tradition, change can be hard. I was surprised by how selfish her mom was about the whole situation. She was clearly attracted to Alex but I liked the way she handled herself and that she was always mindful of the fact that he was engaged, even though she didn’t know his situation.

Alex seems like a really good guy and the way he took care of Katie when they were in trouble was really sweet. He kept her safe in a dire situation and made sure that that she was safe. I felt bad for Alex because his fiancé, Trina, really had him wrapped around her finger. She did some messed up stuff to him and she was really selfish. However, I found Alex to be a little weak. The fact that he stayed with her so long and allowed her to manipulate him the way she did bothered me. It took meeting a genuine girl like Katie for him to really see the toxicity of his relationship with Trina.

The chemistry between Alex and Katie was great and it was obvious they were attracted to each other. Being stuck in a cabin together at Christmas is kind of romantic and they really get a chance to know one another and develop feelings for each other. They both confide in each other their displeasure with their current holiday situations and they end up spending a sweet Christmas Eve together, making a romantic dinner with what supplies they can find and I was really sweet and romantic. Once their rescued, Katie’s afraid she won’t see Alex again but her rescues her right when she needs him and it was really sweet. Clearly they were a perfect match and Alex could finally truly be happy.

Overall, this was a cute novella. It was a bit under-developed in the plot and I felt like Katie’s situation with her mom and her parents was left unresolved. However, it was a cute and romantic story that I really did enjoy. I wouldn’t mind being stranded in a cabin at Christmas with my very own hot hero.

Angie Stanton never planned on writing books, she wanted to be a Rockette. However, growing up in a rural setting with her brothers' 4-H pigs as pets, dance didn't work out. Instead she became an avid daydreamer. After years of perfecting stories in her head she began to write them down and the rest is history.She loves dipping french fries in chocolate shakes, all natural disaster movies and Broadway Musicals. Angie is a proud double finalist of the 2011 National Readers Choice Awards for Love 'em or Leave 'em, as well as a finalist for the Golden Quill Award.When not writing, Angie is concocting ways to make more dreams come true, whether it be tickets to a Broadway show or convincing her family they should rent an RV and travel the country.Please "Like" Angie on Facebook at facebook.com/AngieStantonAuthor.

*An eBook was provided to me in exchange for a fair and honest review. All opinions expressed are my own and unbiased.*
Posted by Unknown at 1:15 AM