Magic is dangerous—but love is more dangerous still.When sixteen-year-old Tessa Gray crosses the ocean to find her brother, her destination is England, the time is the reign of Queen Victoria, and something terrifying is waiting for her in London's Downworld, where vampires, warlocks and other supernatural folk stalk the gaslit streets. Only the Shadowhunters, warriors dedicated to ridding the world of demons, keep order amidst the chaos.Kidnapped by the mysterious Dark Sisters, members of a secret organization called The Pandemonium Club, Tessa soon learns that she herself is a Downworlder with a rare ability: the power to transform, at will, into another person. What’s more, the Magister, the shadowy figure who runs the Club, will stop at nothing to claim Tessa's power for his own.Friendless and hunted, Tessa takes refuge with the Shadowhunters of the London Institute, who swear to find her brother if she will use her power to help them. She soon finds herself fascinated by—and torn between—two best friends: James, whose fragile beauty hides a deadly secret, and blue-eyed Will, whose caustic wit and volatile moods keep everyone in his life at arm's length . . . everyone, that is, but Tessa. As their search draws them deep into the heart of an arcane plot that threatens to destroy the Shadowhunters, Tessa realizes that she may need to choose between saving her brother and helping her new friends save the world. . . . and that love may be the most dangerous magic of all.
*******************************
Clockwork Angel was an exceptional read. I was truly transfixed with the story and as I was reading, I really felt like I could see the book playing out in my mind. The book has set us up for the series by introducing us to the main characters; Tessa, Will and Jem. Jem and Will are nephilim known as shadowhunters who protect humans from mystical creatures and enforce the underworld laws. Tessa is an American girl who is brought to London under false pretenses and discovers that she is part of this mystical world she knows nothing about. There are dark forces at play that wish to use Tessa for her abilities and Jem and Will must fight to protect her.

I really liked Tessa and found her to be a strong female character. I liked that she wasn't weak and frilly. As a woman in the 1800's, I found her to be very outspoken and strong. However, she was also very smart and I loved that she often thought before she spoke, knowing the impact her words may have on those around her. She is smart, determined and caring, even to those that don't show her the same courtesy.

I have to say that Jem and Will have become two of my favorite male characters. They are so different yet they love each other like brothers and would do anything to protect one another. While Jem is sweet, charming and honest, Will is charismatic, aloof and secretive. I am so intrigued by Will and I desperately want to know about his past and what makes him act the way he does. He will show a sweet side of himself to Tessa only to turn around and push her away. I am definitely intrigued by Jem and would love more interaction between him and Tessa in the next book. He doesn't hold as much of a presence in this book as Will does but he definitely left me wanting more.

Cassandra Clare has an exceptional writing style. Her ability to write from a completely different time period and make me feel like I am right there is impeccable. The plot was so fantastic and I loved the underworld of nephilim, demons, warlock, vampires and all other mystical creatures in London during the 1800's. It is such a different type of paranormal fantasy than most others. The book definitely kept me guessing and the plot took a few very unexpected turns. It definitely left me on edge with the strong desire to delve into the next book to see how the story continues to play out.

"Tessa could not remember a time when she had not loved the clockwork angel. It has belong to her mother once, and her mother had been wearing it when she died." ~ Tessa

"He could not rid himself of the image of her on the steps, looking down at him as he spoke the ancient words. She had looked so worried, and the thought that she might have been worried about him had given him an unexpected pleasure." ~ Jem

"The words that had gone through his head, over and over, as he'd walked away from everythiing he had ever known, forever. I have lost everything. Lost everything. Everything." ~ Will 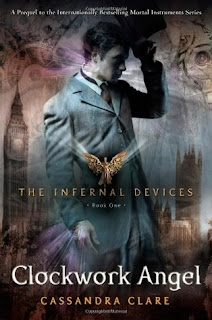