Kassandra Cole has it all—a stable home with great parents, popularity and all the friends she could ever need. She is used to a lifestyle where everything comes easy to her, from good grades to being captain of the cheerleading squad.Her entire world is shaken to the core when a fatal accident takes her father, causing Kassandra to re-examine the course her life was on. The actions of one individual forever changes her life, leaving her to pick up the pieces of her broken family. Kassandra begins to question everything she once cherished and the people she disappointed along the way.Maddon Johnson’s life is as different from Kassandra’s as night and day. Abandoned by his mother at a young age, he is left to deal with his abusive, alcoholic father on his own. He has one goal: lay low and get the heck out of dodge as soon as he is legally old enough.Everything changes when his father’s tragic actions send Maddon crashing into Kassandra’s world. Suddenly, getting away is the last thing he wants as he discovers it is possible to believe in love after all.
***********************************

Kassandra loses her father in a terrible accident caused by Maddon's father. She hates Maddon for what has happened to her family. Maddon can't stop thinking of Cassandra and what his father did to her family. He blames himself and wants nothing more than to get to know Kassandra and take her pain away. After her father's death, she struggles to discover who she wants to be and redeem herself from the person she was before his death. She finds something in Maddon that she never thought she could feel and has he takes her pain away, she can't help falling for him.

I liked how strong Kassandra was. The loss of her father was devastating but she picked herself up and carried the burden as her mother and sister became overwhelmed with grief. I liked that she could look back on who she was before his death and see herself in a completely different light. I thought it was very mature of her to see past her anger and give Maddon a chance. I think the best thing about Maddon was that he didn't let his father's behavior and his broken home dicate who he was. He chose to be better than his father and be his own person. I loved that he was so broken up about what his father did and just wanted to take Kass' pain away.

I enjoyed reading Forever Changed and I thought it was well written and had a great plot. The characters were strong and captivating. I gave it 3.5 stars only because I felt like the romance between Kassandra and Maddon was a little rushed. One minute she hated him and the next minute she was in love with him. I felt like after everything they went through, it would take more time for her to open up to him and for them to come together. Overall, I am really glad I picked this book up and I would encourage you to do it too. 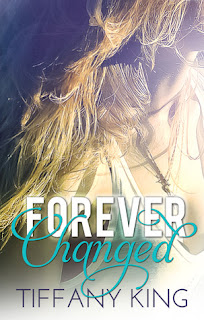 IPOD Picks:
"Mess I Made" by Parachute
"Near to You" by A Fine Frenzy
"Falling Slowly" by Chris Allen