I had loved Rule Archer since the first moment I ever laid eyes on him. He was everything I shouldn't want and the only person I went out of my way to not try and please. He only saw me as a brat, and an entitled, stuck up princess but worse than that all he saw when he looked at me was his deceased twin's girl. It broke my heart because as much as I had loved Remy Archer there was never anything romantic between us and no matter how hard I tried to convince myself that loving Rule was a terrible idea, my poor heart just wouldn't listen. We tolerated each other, barely and had forged an uneasy alliance until one night I had too much to drink and changed the way we were forever. Suddenly life long secrets were no longer hidden and the one thing I always wanted for myself seemed obtainable as long as I was willing to go through hell to hold onto it.Shaw Landon was a class act and I had no idea what to do with her. She was tied to my family, tied to the person that was my other half so I tolerated her and her haughty attitude when I didn't have any other choice. What I didn't know was that a short skirt and too many cocktails on her birthday was going to change my outlook on her for the rest of my life. Some people thought I hid behind all my tattoos and piercings, that I tried to distance myself from my dead twin, Shaw saw through it all and wasn't scared of what was underneath. We weren't supposed to be together, weren't supposed to be anything but uncomfortable acquaintances but that all changed in the blink of an eye. Now I had to figure out just how a girl like her and a guy like me were supposed to be in love without destroying each other. Add in her custom made ex and two disapproving sets of parents and the whole situation sounded like it was more trouble then it was worth.Recommended for mature readers due to sexual content, language and drinking.
*******************************
Shaw has been in love with Rule since she was 14 but everyone, including Rule, always thought she was dating his twin brother, Remy. Rule has always thought that Shaw was a stuck up rich girl who monopolized his twin brother's time. Three years after Remy's death, a drunken night changes everything between Shaw and Rule.

I really liked the character that the author created with Rule. He is this great looking guy covered in tattoos and piercings. He is tough and does not do commitments. However, when things change between him and Shaw, he really evolves. I liked that he didn't change who he was as a person but he allowed himself to open up and start letting people in. I liked that even though Shaw was from a superficial, rich family, she was not like that at all. She really held her own with Rule and didn't act like some clingy, lovesick puppy around him. They were so different and she loved Rule because of who he was and never wanted to change him. I also enjoyed the secondary characters: Rome, Jet, Ayden, Cora and Nash.

This was a really good debut novel for this author. I gave it 3 stars only because it was a little predictable and the beginning lacked a little depth and some of the dialogue was choppy. However, the writing evolved very well towards the second half and I loved the idea that looks can be deceiving and you shouldn't judge based on that alone. Everyone judged Rule because of his tats and piercings when he was a really amazing guy. I look forward to checking out the author's companion novels revolving around the secondary characters. 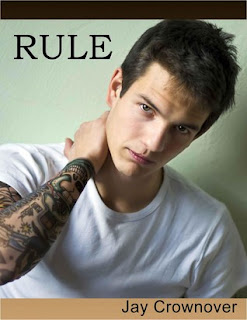 IPOD Picks:
"When a Heart Breaks" by Ben Rector
"Lego House" by Ed Sheeran
"Somewhere Only We Know" by Keane