Chloe hasn't had the best life. With a mother who is gone more often than not, she has had to raise herself. After graduating high school, she leaves to start a new life away at West Virginia University with her best friends Amber and Logan, determined to leave her demons in the past.

On her first day, she meets a stranger who takes her breath away at first sight. Until she met Drake, no one had ever sparked her interest. Now this tattooed and pierced bad boy is all she can think about, no matter how hard she fights it.


Falling for Drake was never part of her plans, but when it happens, things seem to do anything but fall into place.


Dealing with a tragic past, Drake has never cared about anyone else but himself and his band. But when Chloe takes the empty seat next to him in class, things start to change. Instantly drawn to her, he begins to wonder if one girl can take a cold hearted womanizer and change every part of him?


Long hidden feelings are revealed and friendships tested to the brink.


This is my first 2 star review as a blogger and I really hate to do it. This is nothing against the author but I have to be honest and this book just wasn't for me. This book is a perfect example of how all readers have their own tastes and preferences. I picked up this book because the synopsis interested me and it had a 4 star rating on Goodreads and Amazon. However, it was not a 4 star read for me.

First of all, I hated Chloe. She is probably my most disliked character out of all the books I have read and I have read a lot. She is super self-centered and really just a terrible person. She leads Drake and Logan along and only thinks about how hard it is on her. It was so annoying how possessive Logan was when they were around Drake. It was also annoying how Drake's constantly contradicted what he would say. I couldn't really get a handle on his character.

I also was not a fan of the writing. I felt like the sentences were really choppy and the dialogue was not appealing. I felt like there was potential for the plot but it was not developed well enough. The plot was also all over the place and I couldn't figure out what this book was really supposed to be about.

When I picked up this book, I also picked up the second book, Twisted, too. Call me crazy but there is a good chance I will end up reading that book too just to see how it ends. Don't ask me why. 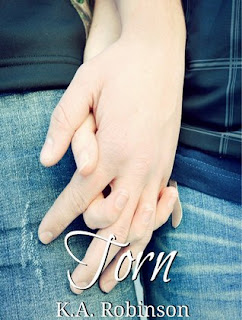