For seventeen-year-old Emerson Cole, life is about seeing what isn't there: swooning Southern Belles; soldiers long forgotten; a haunting jazz trio that vanishes in an instant. Plagued by phantoms since her parents' death, she just wants the apparitions to stop so she can be normal. She's tried everything, but the visions keep coming back.So when her well-meaning brother brings in a consultant from a secretive organization called the Hourglass, Emerson's willing to try one last cure. But meeting Michael Weaver may not only change her future, it may also change her past.Who is this dark, mysterious, sympathetic guy, barely older than Emerson herself, who seems to believe every crazy word she says? Why does an electric charge seem to run through the room whenever he's around? And why is he so insistent that he needs her help to prevent a death that never should've happened?
************************************

Emerson Cole sees dead people. She doesn't know how or why but all she wants is to be normal. Then she meets Michael Weaver and he has sees things too. Her world is turned upside down as she learns that she isn't actually seeing ghosts and that she isn't alone in this world of special abilities.

I loved Emerson. She built this wall up around her and she uses sarcasm as a way to keep it in place. I loved her snarky attitude and the way she never let anyone tell her what to do. She always breaks the rules and beats to her own drum. Michael is your typical white knight who wants to help Emerson and needs her help too. He wants to keep her safe and protect her. He is sweet and charming and handsome.

At first, I didn't think I was going to like this book because I had a hard time getting into it in the beginning. However, when I got to chapter 5, my interest was peaked and I couldn't put it down after that. I just loved the way that Emerson responded to the information she learned about herself and how she rebelled against everyone when they tried to tell her what to do. I really started to like the book even more when they introduced Kaleb. I loved his brazen attitude and his rebellious personality. The interaction between him and Emerson was entertaining.

Even though the book started off slowly, the intrigue and action progressed well. The plot was very well written and thought out. I was definitely surprised by some of the twists within the plot and I ended up really liking this book in the end and looking forward to reading the next book in the series. 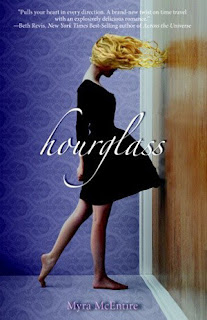