~Synopsis~
Jane Black has written the breakup album of the century, earning her a Grammy, a huge legion of new fans, and the pressure to repeat her success. Sure, the heartbreak from her husband’s unconventional abandonment might have been her inspiration, but it hasn’t done her any favors in the dating department. So when Matthew Harrigan, the toughest music journalist out there, asks for an interview, Jane agrees—as long as her personal life is completely off-limits.

British, gorgeous, and way too tempting, Matthew’s the first guy Jane’s been attracted to since her husband. As she spends more time with him and their relationship heats up, though, so does her writer’s block. How can the queen of the break up pen the perfect follow-up when she’s seriously in love? 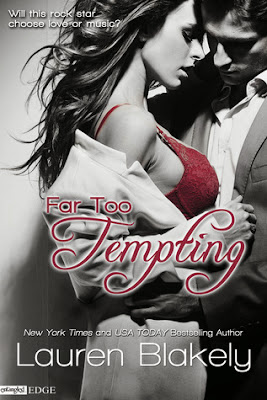 Lauren Blakely is one of my “leading ladies.” I have truly adored every one of her books and I’ve read them all. She has such a talent for creating a diverse cast of characters and the lead male and female of each book is so exceptional and different from the book(s) before it. Jane Black and Matthew Harrigan are two new characters Lauren adds to her repertoire of unique back stories and epic romances.

Jane Black is a musician through and through and she loves writing and singing more than anything, well except her son. She has been a struggling musician for years with mediocre music and less than stellar albums. When her husband leaves her with a broken heart and completely crushed, she channels those feelings into her music and writes an epic album for the broken hearted. Matthew Harrigan is a big time music critic for Beat magazine and he wants to do a feature on Jane and follow her through the process of writing a second album. However, Matthew wants more and he makes that very clear to Jane from the beginning. Jane finds herself wanting Matthew just as bad but can she let down her guard and trust another man, especially one who could quite possibly have ulterior motives and obliterate her heart all over again.

Jane is suffering a severe broken heart after her husband leaves her and her pain is all too real and raw. I connected with Jane and felt the all too familiar pangs of heart break in my chest. Jane’s sadness, fear and loneliness sat closer to home for me than I’d care to admit and I felt like I really got her.  Considering the circumstances of her divorce, trusting people, especially another man is very difficult for her. She has this insane attraction to the sexy British music critic, Matthew but she is always questioning his motives and I totally understood where she was coming from. I was just as skeptical as Jane was even though he proved himself time and again. Of course he would because Lauren doesn't create leading male characters that are anything but sweet, sexy, irresistible and the epitome of swoon-worthy. I'd expect nothing less of Matthew.

Heartbreak is all Jane knows and heartbreak is what wrote Jane’s hit album, Crushed. However, Matthew brings out the opposite feelings in Jane and for the first time in years, she feels wanted and adored and desired. While she revels in these feelings, she feels like she’s lost her writing muse. She starts believing that maybe she can’t be happy and be a successful musician and this made me so sad because she so deserves to find true love and happiness and Matthew seems to be the perfect man to help her achieve this. When she starts to doubt her ability to have both and she thinks she will have to choose one over the other, I wanted to shake some sense into her. I wanted to tell her look inside and find a new inspiration. Jane Black is beautiful, strong, smart and no man should define her. I did a happy dance when she came to this same realization herself and I thanked the stars that she realized this before she did something crazy.

Jane’s insecurities and fears definitely shone through in her relationship with Matthew and I think that he was so thoughtful and caring and aware of what Jane needed to overcome these obstacles. However, he makes a vital error and while I knew his feelings for Jane were real, his actions leave her with doubt and she finds herself nursing a wounded heart. It’s a good thing Matthew doesn’t give up so easily and after proving himself to Jane, she once again finds her inspiration. All Jane needed to do was get out of her own head and let the words just flow. As soon as she did this, she found that she could have it all and she deserved it.

My favorite part of this book was the focus on music and the power it has to help shape our lives. Music can help you heal and give you inspiration. Jane and Matthew are music lovers and they know the power it possesses all too well. Music mended Jane’s heart, music brought Jane and Matthew together and music helped Jane find love and happiness again.

Like Jane, I let the music move me and I am always thinking of my own life playlist. Jane had her heart broken, no not broken, ripped out and stomped on and to help her cope she wrote an epic break up album that rocked the world and inspired crushed hearts everywhere. For my IPOD Picks on this book, I’ve compiled my own “Brokenhearted” playlist from my IPOD. If I were creating my own album of break up songs, I think I'd call it "Wrecked & Raw."

*An eARC was provided to me by the publisher in exchange for a fair and honest review. All opinions expressed are my own and unbiased.*
Posted by Unknown at 12:48 AM