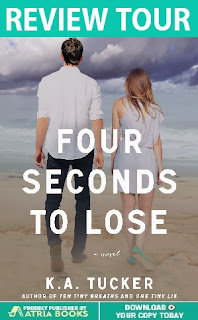 It's Coming!! K.A. Tucker's FOUR SECONDS TO LOSE is right around the corner! This contemporary romance novel releases November 4th, and I have a review for you so you can check it out! There's also an International giveaway below for a signed set of TEN TINY BREATHS, ONE TINY LIE and a galley of FOUR SECONDS TO LOSE. You aren't going to want to miss getting your hands on this new novel from K.A. Tucker. See below for my review and all of the information on FOUR SECONDS TO LOSE and K.A. Tucker, as well as where to find her. Then make sure to enter the awesome giveaway. You can follow along with the Tour and read all of the reviews being posted below!

~Synopsis~
When a gorgeous young dancer walks through his door, a strip club owner must decide whether to follow his rules or his heart in the third novel by the author of One Tiny Lie and Ten Tiny Breaths.

Owning a strip club isn’t the fantasy most guys expect it to be. With long hours, a staff with enough issues to keep a psych ward in business, and the police regularly on his case, twenty-nine-year-old Cain is starting to second guess his unspoken mission to save the women he employs. And then blond, brown-eyed Charlie Rourke walks through his door, and things get really complicated. Cain abides by a strict “no sleeping with the staff” rule. But being around Charlie challenges Cain’s self-control…and it’s been a long time since any woman has done that.

Twenty-two-year-old Charlie Rourke needs a lot of money, really fast, in order to vanish before it’s too late. Taking her clothes off for men makes her stomach curl but Charlie tells herself that at least she’s putting her acting and dancing skills to good use. And though her fellow dancers seem eager to nab their sexy, sophisticated, and genuinely caring boss, she’s not interested. After all, Charlie Rourke doesn’t really exist—and the girl pretending to be her can't get distracted by romance.

Unfortunately, Charlie soon discovers that developing feelings for Cain is inevitable, and that those feelings may not be unrequited—but losing him when he finds out what she’s involved with will be more painful than any other sentence awaiting her. 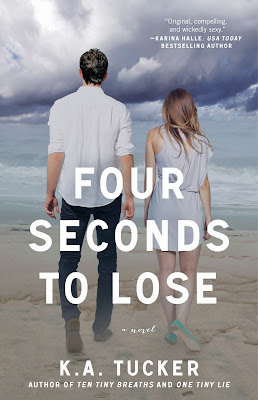 I just have to start off by saying, "Wow! K.A. Tucker has done it again." I would never have guessed the depth and character development that could have come from Cain but I absolutely loved hearing his story and getting to know him. He is such an enigma in the first two books but there is so much to him and the experiences that have made him the man he is.

At 29, Cain is gorgeous, smart, generous and very successful. While he does run and own a strip club, he is unlike any other strip club owner out there and I think he does it more to help the women who work for him than he does for the money. It's a tough business and you can't save everyone but Cain is going to try his hardest. When Charlie walks into his club, he is hit with memories of the past he has longed to overcome. However, there is something different about her and he can't deny the attraction and longing he has for her. Charlie is just as intrigued and attracted to Cain but she is hiding a huge secret and living a double life and she isn't sure Cane could forgive her if he found out.

To be honest, I wasn't sure how I would feel about Cain. I guess it's fair to say that he isn't prevalent enough in Ten Tiny Breaths or One Tiny Lie to make a judgment but I was definitely surprised by how quickly I came to really like him. Honestly, the first chapter in this book took my breath away and 3% in, I already had chills. Cain has definitely been through a lot in his young life and the fact that he has become the man he is was totally amazing to me. I also really love the way he looks out for the girls that work for him and he isn't just another sleazy strip club owner. He wants to help them get on their feet and get out of this life. He doesn't use them or take advantage of them and that says so much about his character. He is definitely a guarded man so watching his walls slowly crumble with Charlie was fantastic and I loved it.

I was immediately intrigued by Charlie and the mystery that is this woman. She is definitely hiding something and when I found out what she was involved in, my heart sank into my stomach. She is living a life she has no control of and she is stuck in a situation that seems almost impossible to get out of. Her only option is to save enough money to disappear and never be found. With everything that she has to go through and has been through, I found her to be incredibly brave and strong. She definitely knows how to handle herself in a difficult situation that most girls her age wouldn't be able to. This is what leads her to Cain's club and ultimately Cain himself. Falling for him was never in her plans and she fights hard to deny her attraction and feelings because she knows she can't stick around.

We get some brief appearances from the characters we know and love like Kacie, Livie, Trent, Storm, Dan, Ben and Tanner. I loved the way the group opened up for Charlie and let her in with no questions asked. Charlie really started to feel like she had a home and friends to care about and that was huge for her. We really get more acquainted with Cane's bartender, Ginger, who becomes a really good friend to Charlie. I loved Ginger and her feisty attitude. She genuinely cares about Charlie as well as Cain. She’s always giving both of them some great advice and she isn’t afraid to speak her mind.

Cain and Charlie are 2 people who have a bit of a sordid past. They each have demons that haunt them a little and cause them both to be guarded with those around them. Cain is a protector through and through and when he meets Charlie, his need to protect comes out in full force. He knows she is hiding something and there is more to her than she lets on but he doesn't care about her past or what she's done. He wants to know who she is and he finds himself desperately wanting to be her future. The situations Charlie was put in over and over really made me nervous and I was always waiting for the ball to drop and things to go terribly wrong. I also really liked the slow build of Charlie and Cain’s relationship and the constant sexual tension. The longer they try to deny what’s flowing between them, the more palpable the tension became.  Just when they finally give in to the temptation and express their desires to one another, shit hit the fan and Charlie faced an impossible situation. I loved how hard Cain fought for her and that he didn’t just give up and let her go. Cain doesn’t let many people in so when he does, you know that person is important to him.

I don't know that I adequately expressed how I felt about this book. While it isn't my favorite in the series, it definitely holds its own and I was instantly enthralled. I know I mentioned this above, but the first chapter was just incredible. It really set the tone for the book and hooked me. I was glad I started this on a Saturday because there was no way I was putting it down until I finished. Unlike the other books, this one is written in dual POV and I loved that. Considering everything going on with Charlie, I think it was necessary and I don't think it would have worked any other way. As always, the writing is fantastic, the characters are well developed and the plot is captivating and full of surprises.

Born in small-town Ontario, Kathleen published her first book at the age of six with the help of her elementary school librarian and a box of crayons. She is a voracious reader and the farthest thing from a genre-snob, loving everything from High Fantasy to Chick Lit. Kathleen currently resides in a quaint small town outside of Toronto with her husband, two beautiful girls, and an exhausting brood of four-legged creatures.

October 30
Into the Hall of Books
Once Upon A Twilight

To Read my reviews for Ten Tiny Breaths and One Tiny Lie, click on the links below:
TEN TINY BREATHS | ONE TINY LIE

*An eARC was provided to me in exchange for a fair and honest review. All opinions expressed are my own and unbiased.*
Posted by Unknown at 12:00 AM