After what he expected to be the romantic gesture of the century, Evan is looking at no friends, a year of ineligibility on the football team, and no girl.

He's starting over alone and doesn't know quite how to proceed. Certain members of The Crew refuse to let him face things by himself, taking him under their wing, and it doesn't take the ladies long to notice him, either.

Sometimes life doesn't go as you had planned. Sometimes it goes better.

Embrace, the second book in the Evolve Series by S.E. Hall, follows the characters from her debut New Adult romance, Emerge. 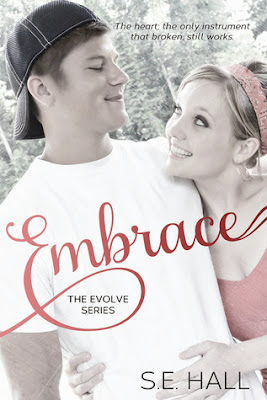 This is a tough review to write without including a few spoilers from Evolve, book #1, in the series so if you haven’t read Evolve, you may not want to read this review.

Evan made a lot of changes and gave up his UGA football position to transfer to Southern for Laney. Only, when he got there, she had chosen Dane and had yet to inform him of it. I felt terrible for him and I was glad to see the story was going to continue so we could see if he would get his happy ending. I love happy endings and I wanted to see this for Evan since I knew Dane and Laney would get theirs.

Evan has just given up everything only to be thrown into sadness, anger and loneliness. Sawyer immediately steps in and takes him under his wing and I loved that. It shows the good side of Sawyer and it shows a lot more in this book. There is so much more to him than meets the eye. Evan has a lot of anger towards Laney and I can’t say that I blame him. While I never felt like Laney deceived Evan, she really hurt him and she wasn’t completely upfront with him right away. Had she been completely forthcoming with her feelings for Dane, Evan may not have given everything up.

Whitley is not given a fair shot in Evolve and she is portrayed as a clingy, snobby bitch. However, we get to see the real Whitley in Emerge and she is completely different than the original impression. The moment Evan meets her, he sees the real person inside and I loved that he gave her a chance and got to know her despite what Sawyer said and the fact that Laney didn’t like her. I think Laney was a bit immature when it came to her attitude towards Whitley and I was glad that she turned her attitude around and gave her a chance. I never saw Laney as a catty witch so I liked that she got over herself and gave Whitley a chance.

I really liked that the focus of this book was Evan finding himself and realizing that maybe he and Laney werent’ meant to be together like he thought. He really learned a lot about himself and even thought he may have regretted it at first, I think he was glad he switched to Southern in the end because he found everything he wanted and needed there. He became a part of “The Krew” too and he got his friendship back with Laney.  While this was mostly Evan’s story, I liked the added scenes from Dana and Laney’s POV so we still got a glimpse into the love and relationship they were building. Throughout the story, they experienced some tragedies and moments that solidified their friendships and the relationships they were building. It was really great to see.

Overall, I really liked this book and loved getting to know the characters even more. While this book was mostly about Evan and Whitley, we got to see more of Tate, Bennett, Zach and Sawyer and I know we are going to get their stories and happy endings in the future.

Laney
“Hello?”
“Zach, don’t say my name,” I choke out, storming across the lot as fast as my shaking legs will carry me.
“What’s wrong? Where’d you-“ his voice comes loud and worried through the phone.
“Don’t say that!” I interrupt, God, how embarrassing. “Can you walk away from everyone and talk to me for a minute? Where no one can hear you.” My voice is nasally and obnoxious, getting on my own nerves.
“Yeah Mom, hang on.” Zach- not a great actor. “Okay Laney, I’m by myself now,” he whispers.
“I’m sorry I bailed on practice, and I’m sorry to bug you now, but I need a Zach of infinite wisdom fix real bad right about now.”
“Let’s pretend I don’t already know what’s up your ass and you go ahead. It’ll give you a chance to vent.”
Alright, so that almost makes me grin.
“Basically, he just hung on that bitch in front of me just to piss me off, and it worked! Seriously? I don’t do that shit to him! Nothing I did was to purposely hurt him. How long did I absolutely torture myself NOT to hurt him Zach, huh? A long ass time!” I come up for air, waiting for him to tell me how right I am while I climb in my truck.
“Laney, you know I love you, right?”
This can’t be good.
“Yes…”
“Then you know it’s with love when I say this.” Dramatic pause that makes my skin crawl. “Get over yourself! I don’t care if he fucked her on the field and asked you to film it. You may not have meant to, but you destroyed that kid. He’s here with no friends, no girl and a new team. Sound familiar? He’s just trying to put one foot in front of the other every day, just like you did. You got your happily ever after, so back the fuck off and let him try to find his.”
Well then. Zach-1. Laney-0.
It hurts, not even gonna pretend it doesn’t, but his words are honest…and absolutely dead on. It angers me at myself for being the cause of such sad, but true words, describing the crushing of my Evan. It’s a lot to think on and I have to do that now, before I cruise right out of control.
“You’re right Zach. That’s why I call you. I’ll always get the straight-up what I need to hear. Thanks.”
“I luv ya Laney. Don’t be mad at me, but much like yourself, don’t ask for my advice if you don’t want it.”
I chuckle, “God, if that isn’t the truth. You’re harsh, but right. I’m not mad, I swear. Now go coach! I’ll talk to ya later.”
“Later Laney.”
I hang up and stare out my windshield, pondering. Zach is right, I’m being a selfish bitch.

S.E.Hall resides in Arkansas with her husband of 17 years and 3 beautiful daughters. When not in the stands watching her ladies play softball, she enjoys reading YA and NA romance. 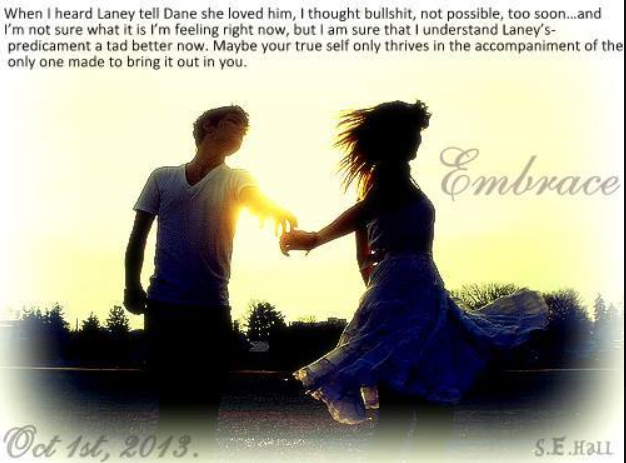 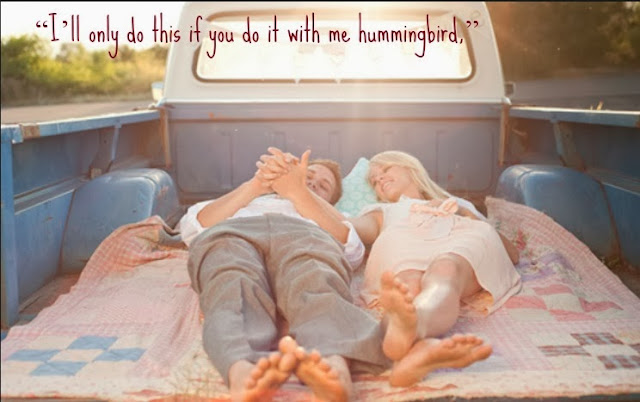 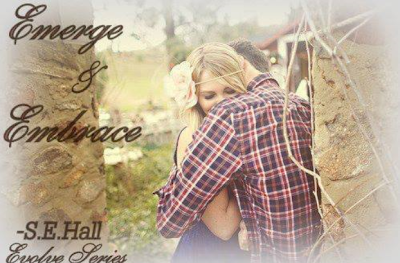 *An eARC of this book was provided to me in exchange for a fair and honest review. All opinions expressed are my own and unbiased.*