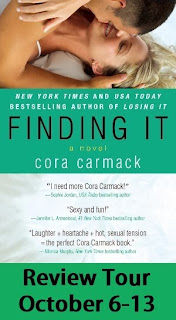 I am so excited to be a part of the review tour for Finding It by Cora Carmack. I adore Cora and love her more and more with each book. Check out my review below and if you haven't read a Cora Carmack book yet, go read one, seriously, now.

~Synopsis~
Sometimes you have to lose yourself to find where you truly belong...

Most girls would kill to spend months traveling around after college graduation with no responsibility, no parents, and no-limit credit cards. Kelsey Summers is no exception. She's having the time of her life . . . or that's what she keeps telling herself.

It's a lonely business trying to find out who you are, especially when you're afraid you won't like what you discover. No amount of drinking or dancing can chase away Kelsey's loneliness, but maybe Jackson Hunt can. After a few chance meetings, he convinces her to take a journey of adventure instead of alcohol. With each and experience, Kelsey's mind becomes a little clearer and her heart a little less hers. helps her unravel her own dreams and desires. But the more she learns about herself, the more Kelsey realizes how little she knows about . 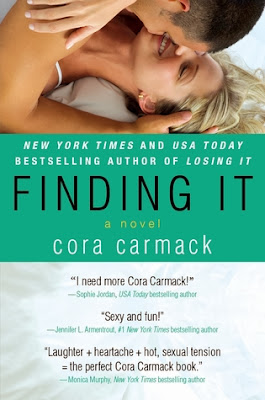 This may be my favorite book of the series so far. We get to see a whole side of Kelsey that was never shown or discovered in Losing It and it changed my perspective of her completely. Also, Jackson Hunt? Yeah, I'm swooning! I may even want to marry him. I also love books with a plot revolving around exciting adventures and self discovery. Finding It had all that and more, plus the European setting was fascinating.

Kelsey has just graduated college and decided to spend her summer traveling Europe, looking to discover herself and what she wants to do with her future now; or so that’s what she tells herself and every one else. The truth is, she is running scared. Running from a past that has her riddled with guilt and shame; a past that she has shared with no one before. This plotline added such depth to Kelsey’s character and I feel like we really get to know her and understand the reasons behind her actions of the past. Underneath the façade she puts on is a sad, lonely and confused girl who is just looking to find something, anything to make her forget the past and move forward to the future. Kelsey is a pro at putting up a wall so that no one can see the fear and pain she hides, that is until she meets Jackson Hunt.

“Despite being able to move and breath and talk, I’d felt stuck for a long time, leaving a past I wanted to forget and headed toward a future I didn’t want. Until Hunt.”

is a mystery. A sexy, hot, sweet, tender mystery. He challenges Kelsey to grab life by the horns and to discover happiness without the use of alcohol or sex. He sees through her and his desire to help her heal and find her passion is palpable. He carries his own sadness and pain behind his eyes and every once and a while he lets down his guard just long enough that Kelsey can see it. However, he doesn’t open up to her until it’s too late and his confessions may not be enough to stop her from leaving. I always sensed that there was something more to and that he was carrying a pretty big secret that would blow up in his face. I had my suspicions and I was right.

“And that was the Hunt one-two punch. Pull you in and then plow right over you. Give you the most intense kiss of your life, and then pretend like it never happened and let you fester in your sexual frustration.”

Holy sexual tension and chemistry; Jackson and Kelsey had all that and more. From the moment they first meet, there is an undeniable attraction between the two of them. However, is reserved and intent on only being friends. What he really wants to do is mend Kelsey and he convinces her to give him seven days to show her what life is all about. He takes her all over and as they experience unbelievably incredible adventures, Kelsey finds something inside of her she never thought existed and she felt genuine happiness that has eluded her for so many years. didn’t come out empty handed either. What started out as a simple mission to save a girl that he saw a little bit of his past self in turned into something so much more for him. I adored watching Kelsey and fall for each other and I loved the way Kelsey tempted him and sliced his resolve. When she finally broke him down, she never expected the feelings that came with it. Despite it all, I knew was hiding something that was going to bring it all crashing down. It did just that and my heart broke for both of them.

“In the quiet night, I wondered if it was only the beginning of something bigger. One long, exhilarating, terrifying fall. One without the safety of harnesses and cords and a plan. One with no guarantee that I wouldn’t hit rock bottom.”

While ’s betrayal crushed Kelsey, it also opened her eyes to the realities of her life and how she was previously living it. It may have hurt her, but it inadvertently helped her find a way to put all the pieces together, confront her past and move on. While she finally found a way and a place to be happy, there was one thing missing; . It’s a good thing doesn’t know how to give up. The way he fought his way back to Kelsey was so incredible and if I wasn’t already in love with him, this would have done me in for sure. My heart actually fluttered as Kelsey read ’s letters and opened her heart back up to him. That man has as way with words and I was wrapped up in them with Kelsey. What a beautiful ending!

“He tasted like warm summer days and hurricanes, like everything I wanted and everything I didn’t know I needed.”

Cora Carmack never ceases to amaze me and I truly think she just gets better and better. With each book I read, I fall even deeper for the characters and I find them to be more expertly developed. For me, Finding It had everything. Incredible characters, exceptional plot depth, and a fantastic setting. Keep em’ coming Cora cause I need more!

“Being an adult is hard work. I know people tell you this growing up, but it doesn’t really sink in until you’re living it, waist deep in the swamps of no-free-time and not-enough- money.”

Amen!
~IPOD Picks~
"Come Around" by Rosie Golan
"Dream" by Priscilla Ahn
"All That I'm Asking For" by Lifehouse

Cora Carmack is a twenty-something writer who likes to write about twenty-something characters. She's done a multitude of things in her life-- boring jobs (like working retail), Fun jobs (like working in a theatre), stressful jobs (like teaching), and dream jobs (like writing). She enjoys placing her characters in the most awkward situations possible, and then trying to help them get a boyfriend out of it. Awkward people need love, too. Her first book, LOSING IT, is a New York Times and USA Today bestseller.
Links:
Website | Twitter | Facebook | Goodreads

Check out the rest of the Finding It Review Tour Stops below:

October 8th
Bend in the Binding

*An eARC was provided to me for a fair and honest review. All opinions expressed are my own and unbiased.*
Posted by Unknown at 12:30 AM