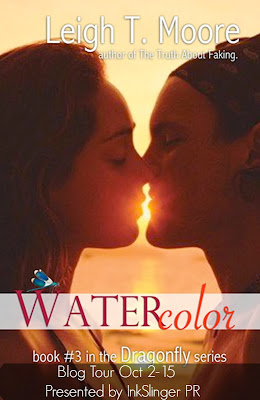 Today, I have the tour for Watercolor by Leigh T. Moore, hosted by Inkslinger PR, on the blog today. I love this series and I am super excited to share my review of the third book in the series with you.

~Synopsis~
Finishing senior year is supposed to be the best time in a person’s life.
Finishing senior year as Julian’s girlfriend should’ve been the icing on the cake.
Knowing the secret that could change everything for him is the only thing threatening to spoil it all.
Until Jack returns.

Anna and Julian are together at last, and it’s as hot and happy as they knew it would be. The only problem is The Secret.

But while Anna is determined to fight for the guy she loves, she could still lose Julian when he discovers the truth she’s been helping to hide. 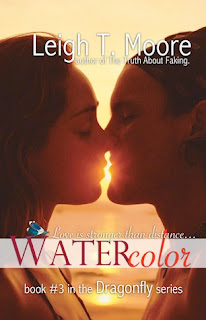 Wow. Watercolor was amazing. I mean, this series just gets better and better. While I enjoyed Dragonfly, I wasn’t a big fan of Anna and I loved Julian but he was barely prevalent in the book. Undertow was such a unique and different storyline and I loved getting to see the story behind Bill Kyser and Alex LaSalle and how their past affected Jack, Lucy and Julian’s life now. Watercolor was all about the growing relationship between Julian and Anna and it was fabulous. There was a ton of Julian and Anna definitely grew on me in this book.

Anna knows Bill and Alex’s secret and I definitely admired her for keeping her word and not revealing what she knows. It was clear how much it was killing her to keep the truth from Julian and I loved that she tried to convince them to tell him the truth because she knew it wasn’t her secret to share. She and Julian were building something really great but the secrets she was hiding constantly got in the way. On top of the secrets, memories of Jack kept creeping in on Anna and I was not happy. I wanted to shake Anna for even thinking of him when she had Julian in her life. I want to say I understand since they broke up only a few months prior but I was never a fan of her relationship or infatuation with him.

I was proud of how Anna looked out for Julian and I was so glad when she realized how much she loved him and how her feelings for Jack could never compare. Julian was so much sweeter, kinder and better for Anna and I was glad that she was able to see that. They had a few moments of struggle and I worried that Julian wouldn’t be able to get past the fact that Anna kept such a huge secret from him. However, he handled it really well and I was so happy that he didn’t hold it against her and he saw and understood the position she was in. With all the secrets out to of the way, Anna and Julian could focus on their relationship, which is exactly what I think they needed since they will have a tough road ahead of them since they will be going to colleges so far away.

Overall, Watercolor was fabulous and I enjoyed the continuation of Anna and Julian’s story. It is well written and realistic. Julian and Anna were great together but they had real issues that they had to work for and everything wasn’t sunshine and roses. In the end, they left things in a really good place but after reading the look into Mosaic, book #4, I’m a little nervous to see where their story will go. 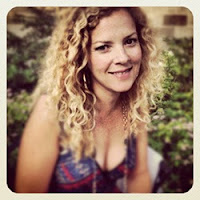 Leigh Talbert Moore is the author of the popular young adult romantic comedy The Truth About Faking, its companion, The Truth About Letting Go, which is a Top 5 Finalist in the 2013 “Best Indie Book Awards,” sponsored by The Kindle Book Review; the romantic-suspense novel Rouge, which was a Quarter Finalist in the 2013 Amazon Breakthrough Novel Awards; and the Dragonfly series, a new contemporary YA to new adult romantic saga.
A southern expat and beach bum (and ex-journalist and editor), Leigh lives with her husband and two young children in a landlocked location. To compensate, she conjures new worlds, characters, and situations while playing chauffeur, chaperon, group activity leader, and referee.
Sign up for Leigh’s newsletter, and be the first to know about sales or new releases!
Blog: http://leightmoore.blogspot.com/
Twitter: http://www.twitter.com/leightmoore
Facebook: http://www.facebook.com/LeighTalbertMoore
Author Goodreads: http://www.goodreads.com/author/show/6452152.Leigh_Talbert_Moore