ARC Review: Keep You From Harm by Debra Doxer

They weigh you down. I’ve kept a secret all my life. It’s my mother’s secret, too. I inherited it from her along with a unique ability that only we possess. She’s gone now, another victim of addiction. If her death isn’t enough to bring me to my knees, her betrayal flays me to the bone. Because the secret my mother and I have been keeping is just one of many she’d kept. She never told me I have an older brother. And now he’s here, eager to be my guardian.

There is no one else. So I move across the country to live with this stranger, my brother. But experience has taught me that most situations are temporary and forming attachments only leads to hurt in the end. That’s why I’m determined to keep to myself in this new place, struggling to seem aloof while I’m quietly breaking apart.

Then I meet Lucas…

His magnetism is hard to resist, and most girls at school aren’t resisting. I don’t fall so easily though, especially not for guys who use their good looks as a weapon. From the start, our interactions are tense and volatile. I know it’s because I’m denying the unwelcome desire that grips me when he’s near. I think he feels it, too. He looks at me with an intensity that threatens to unhinge my resolve. Soon he’s trying to break through the walls that past hurts have built.

But I’m not what I appear to be, and it wouldn’t be fair to get involved with him. At least that’s what I tell myself. Until a terrible act of violence reveals that Lucas has a secret, too. It’s a secret that links us together and ties us to an evil history I could never have imagined. 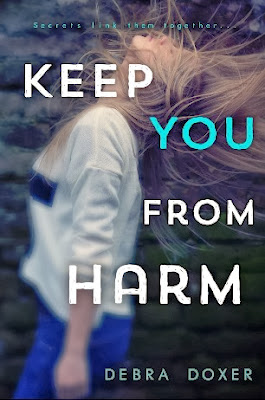 Raielle is a senior in high school and after her mother dies, she is sent from San Diego to New York to live with her older brother Kyle, who she didn't even know existed until her mother's death. She is instantly connected Lucas and feels drawn to him but she quickly denies it. Raielle carries a secret that her mother warned her can be dangerous if people know about it so she keeps everyone at arm’s length. However, Lucas feels the connection too and he won't give up so easy. He wants to be with Raielle and he'll do anything to convince her it's meant to be. However, shocking discoveries and tragedy may take the decision out of their hands.

Raielle is smart, confident and can stand on her own. She sticks to herself and doesn't really get close to people but she also isn't a push over either. I loved the way she held her own and how strong she was considering everything she had been through. While she had a tough upbringing and she was used to taking care of herself, she still loved her mother and losing her was tough. I think it was even harder on her because she had such conflicting emotions about her mom. She loved her but she was angry to find out that her mom had kept so many secrets from her. I could tell Raielle was really guarded so I liked seeing her open up a bit to her brother and his family as well as her new friends, Miles, Gwen and of course Lucas. I loved how well she held herself together and played it cool with her emotions when she was dealing with Lucas.

"Emotions are dangerous. So are expectations."

I liked Lucas but I also felt like he was more moody than a girl on PMS. He seriously ran so hot and cold that it was ridiculous. He felt this connection to Raielle too and he made sure she gave him a chance and then he turned around acted like a dick. I felt like Lucas really grew as a character and redeemed himself. Clearly he messed up and he knew it. He worked extra hard to prove himself to Raielle and he definitely showed how much he cared for her. Lucas also had a lot going on in his life and when we find out the personal issues he faces, it's sheds some insight into why he is a bit emotionally messed up. He is a loyal and loving big brother and I really liked that about him. He would do anything to protect his brother.

This book also had some really great side characters and I especially liked Miles, Gwen, and Kyle. Miles is Raielle's neighbor and the first friend she makes. He is a really good guy and he instantly connects with her. He is also Lucas' best friend and he looks out for both of them as they build their relationship. Gwen isn't one of the popular girls but Raielle has never cared about that and they instantly connect as friends. Gwen helps her open up a little bit and she encourages her to give Lucas a shot. However, when Lucas pulls a few dick moves, she is totally there for Ray. Kyle is Raielle's brother and I loved that he truly wanted to get to know her and be a big brother. He knows she hasn't had the greatest life and he wants her to feel like she is loved and has family. I never doubted his intentions with her. While I didn't particularly dislike Chloe, Kyle's wife, I did feel like she judged Raielle and didn't really take the time to get to know her. She assumed Raielle is messed up because of her childhood even though Ray does nothing but prove her wrong.

Raielle holds a secret power that she shared with her mother and was told never to tell anyone. While it is a special gift, it can also be dangerous and people would use her to exploit it. Upon her mother's death, she learns that her mom kept so many secrets from her and I was torn for her because it was obvious that it hurt her deeply. She will never have the chance to confront her mother about the secrets or find all the answers she is looking for. I know keeping this secret and having no one  to share in the burden with was tough for her so I was glad that Lucas discovered her secret and that he ended up being someone she could trust to confide in. As their relationship grew and they fell even more for each other, it was obvious that he would do anything to protect her. He definitely proved his feelings for her and I definitely became a fan of his. Raielle is truly a good person and she makes a huge sacrifice that was heart wrenching. The only way she knows how to change things is to find her real father and I loved that Lucas was willing to drop everything to help her. While the ending wasn't a huge cliffhanger, it definitely left things hanging in the air and I'm desperate to know how it's all going to play out. I guess I'll have to wait for book 2!

Overall, I really enjoyed Keep You From Harm a lot and found it very intriguing from beginning to end. It is well written with a nicely developed plot that flowed really well. I was constantly intrigued by Raielle and wanted to know more about her secret. Even though we learn about her abilities early on, there is still so much to learn about it and I loved how the author incorporated it into the story. I haven't read another paranormal romance quite like this one and I am definitely hooked to this series.

Debra Doxer has always loved to write. She also loves to read, often finishing several books a week. Debra works as a writer in the network and software security field. For fun, she writes fiction novels.
Debra lives with her family outside of Boston and is currently working on her next book.


*An eARC was provided to me by the author and ATOMR tours in exchange for a fair and honest review. All opinions expressed are my own and unbiased.*