Blog Tour Review + Giveaway: Play With Me by Piper Shelly

Today, I have the tour for the novella, Play With Me by Piper Shelly, hosted by Xpresso Book tours, on the blog. Check out my review and enter the giveaway!

~Synopsis~
Ryan Hunter's parties are legend. And tonight she's going to be there.

Liza Matthews anticipates the return of her best friend and only love since kindergarten from soccer camp. But when Tony finally shows up, his mind is more focused on another girl. And worse, she's a soccer player. Fighting for the attention Liza craves, she's just a hairbreadth away from making a very stupid decision. But when extraordinary times call for extraordinary measures, she's prepared to play ball to get her man.

The tryouts are hell, the first match ends bloody, and the morning after the selection party she wakes up in the worst place possible—in the arms of the captain of the soccer team. The hottest guy in school. Ryan Hunter. 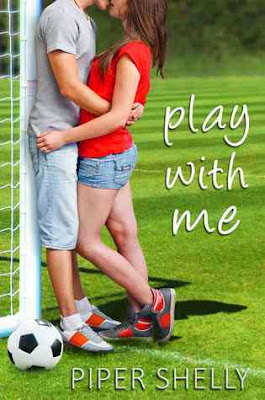 Novellas can be hit or miss with me, especially when they are a stand alone and not a spin off of a larger novel. However, Piper Shelly did an amazing job with Play With Me and I was so impressed by the depth of the characters and the plot for such a short story. I felt like I really connected with Liza and got a good sense of who she was as a character. I adored her and thought she was funny, witty and determined. I worried that she might be a bit awkward and shy, especially since she has had a crush on her best friend from childhood, Tony, for like ever but never did anything about it. She really impressed me with her charm and spirit. Ryan is a gorgeous, popular guy and she is not at all intimidated by him. I was cracking up at some of their interactions and I really liked the way she opened her eyes and looked beyond Tony to see someone else. She definitely battled some internal turmoil over her feelings for Ryan since she has only ever loved and had eyes for Tony.

I liked both Tony and Ryan but I felt like Tony took his friendship with Liza for granted. It's like they say, "You don't know what you have until it's gone." He was a typical 17 year old boy, thinking with the wrong head, and he started dating Cloey and kept it from Liza. Cloey was a real bitch to Liza and the fact that Tony didn't stand up for her rubbed me the wrong way. My heart broke for Liza when she found out because I felt like Tony still led her on a bit by the constant flirting he did with her. Luckily Ryan was there to swoop in and pick up the pieces and the way he took care of Liza and distracted her from her broken heart was sweet. There was definitely more chemistry and attraction between Liza and Ryan than her and Tony which is why she was so confused. She had loved Tony for forever but being with Ryan gave her feelings that Tony never did. It was entertaining watching her try to fight it, especially with Ryan's charm and persistence.

I liked the way Liza handled the situation with Tony and Ryan when everything came to blows. She didn't allow Tony to just jump back into her life like nothing happened. He really hurt her and she was able to recognize that their friendship had changed. Ryan messed up too and I was glad to see that he didn't just give up and move on. It was clear that he had real feelings for Liza and now that he had finally got a hold of her, he wasn't going to let her go so easily. I was supremely happy with Liza's decision in the end and I felt like Piper really tied up the story well.

Overall, I was thoroughly impressed with how well written this story was and how well developed the characters were for such a short book. I definitely had a handle on who Liza, and Ryan were and felt a connection with them. I was definitely left wanting more but in a very good way. The second novella is Ryan's story and I immediately jumped on Amazon and picked it up after I finished this book. I will definitely be following The Grover Beach Team series and I can't wait for more to come.

Play With Me is FREE on Kindle for the month of October so pick up a copy today! 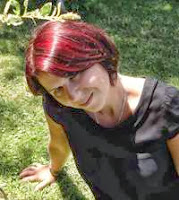 I’m a cool girl with a passion for writing.
The genres you’ll find me hanging out at are contemporary and paranormal YA, but I’m also snooping into some adult paranormal right now. All of them romances…of course.
The nitty-gritty:
I’m an Austrian lass—totally uncomplicated and up to anything fun.
I grew up in Vienna, not by free will but because my parents decided to move there when I was only 4 years old. I. Hated. The. City. Everything about it. So right after graduation I moved back to Upper Austria, where I settled down with a nice husband and an awesome laptop.
I’ve been a storyteller all my life. Already in kindergarten, I came up with the most exotic fantasies and tales. My teacher would call me a liar. I call it the cornerstone of my writing career.
People always told me you can’t make a living with being an author. So when my first novella PLAY WITH ME came out and shot straight to the stars within the first week, I was totally dumbstruck. Took me a while to realize what was happening, LOL.
And the personal stuff:
At the (awesome) age of seventeen, I met the love of my life. But he was a playboy, and I was so not going to be his next trophy. It took him another four years of fighting for me until I finally decided to give that “couple-thing” with him a shot. I’m now married to this man. ;-)

We have an eleven-year-old son, and together we travel a lot…although I sometimes wish the trips were shorter because I can’t wait to get back to my laptop and my many stories. Unless we’re in Disneyland. No stress to go home then…

If you still want to know more about me, my FAQ page is the right address for you. ;-)

*An eBook copy was provided to me in exchange for a fair and honest review. All opinions expressed are my own and unbiased.*