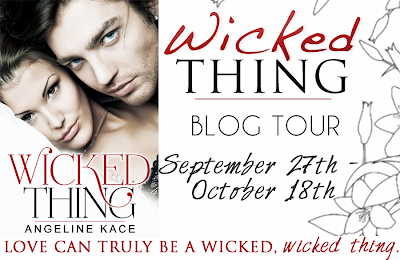 Today I have the tour for Wicked Thing by Angeline Kace, hosted by Inkslinger PR, on my blog today. Check out my review & the and excerpt below.

Carmyn Rafferty witnessed the aftermath of her mother's affair. She learned at a young age not to trust anyone. Especially not your spouse. So she's planned. She's planned every detail of her life: who her husband will be, what their careers will be, what their lives will be like. All to avoid the pain of infidelity.

Dallas Brown lives according to his own terms. He doesn't do relationships, he doesn't care what anyone thinks of him, and he doesn't live up to anyone's expectations.

When Carmyn's fiancé cheats on her, it sends her into a whirlwind of one-night stands with the most infamous player on campus. She can't seem to stay away from this tough guy and his dangerous motorcycle. Everything about him is the complete opposite of who she'd planned to fall in love with: tattoos, dark stubble along his jawline, and hair that brushes his shoulders.

As Dallas and Carmyn begin to fall deeper and deeper into each other, they learn that love can truly be a wicked, wicked thing.

**Due to content, this book is not suitable for readers under the age of 18.** 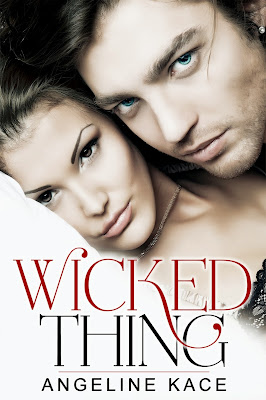 I was definitely intrigued by Wicked Thing a few months ago when I participated in the cover reveal so I jumped at the chance to participate in the blog tour. I loved the idea of two people just interested in a casual relationship that develops into more instead of the same old “good girl tries to reform and tame the bad boy.” I expected the fun romance and sweet build up to a relationship but what I wasn’t expecting was the emotional heartbreak that Dallas endures. I seriously almost cried.

Carmyn is the type of girl who has her future all laid out. She’s looking for the perfect husband with the perfect career and the perfect life. She thinks she has all these things with her fiancé, Beckett so she’s devastated when she catches him cheating on her. Carmyn’s need for perfection in life stems from her parent’s less than ideal marriage and her mother’s constant struggle with drugs. Beckett’s betrayal hits her hard and she finds solace and comfort in something easy and fun with Dallas. She knows his reputation but can’t help seeing something else inside him. She unexpectedly falls for him and I wanted to shake her as she continuously denied it to herself.

Dallas is the typical playboy; one night stands and no strings attached sex. He is always upfront about who he is and Carmyn knows it too. He is obviously attracted to her and when she offers a no strings night of sex, he’s all for it. However, there is something different about her and he knows it the moment they share that night together. Carmyn is the first girl that doesn’t want to change Dallas or push him for a relationship and in the process of having fun and spending time with her, he falls in love. I loved that Dallas didn’t run from his feelings are try to hide them. In fact, he tried on several occasions to express how he really felt for Carmyn and she pushed him away.

I really liked Dallas and never saw him as a playboy to be reformed. He had just never met a girl that made him want anything real until Carmyn. I loved the buildup of their relationship and their chemistry was obvious. However, my favorite part of this book is Dallas’ issues with his family. He is estranged from his father and he holds a long standing grudge against his brother. This is a bit of a heart breaking storyline and I really felt the pain Dallas feels from it all. He tries to feign nonchalance but you can see the anger and sadness behind it. This causes problems between him and Carmyn because she wants to fix something that Dallas just isn’t ready to fix. I actually agreed with him and felt like Carmyn needed to back off. While I liked that she cared about him enough to try and  help him heal, she went about it all the wrong way.

It was really great seeing Carmyn realize her feelings for Dallas and the fact that she truly loves him despite the fact that he is a contradiction to every perfection she wanted in a man. She was more in love with the idea of Beckett than Beckett himself and I was so happy to see her fight for Dallas when she realizes this. They both made mistakes and handled their break up wrongly but it was so much sweeter when they made up. The climax of the Dallas’ family situation was both heart wrenching and soul defining for Dallas. I really did not expect the situation or outcome with this storyline but it was incredibly incorporated into the plot.

Overall, I really enjoyed Wicked Thing. The writing is well done, the romance is steamy and hot and the plot was riveting. While it held a few NA clichés, that is to be expected since most books in this genre tend to carry a few. They were minimal and held no real effect on the enjoyment of this book.

So Angeline mentions “Find Me” by Boyce Avenue in the book and I freaking LOVE Boyce Avenue and haven’t met a lot of people who know of them so in honor of this awesomeness, I have done a Boyce Avenue only IPOD selections for this review.

One, there's definitely a chemistry between us, and two, there's no way Dallas can miss it.
As if to prove my point, he closes the distance between us and casts his lips onto mine. His mouth is warm, his tongue sure. I let myself go, like I often do when I'm with Dallas, and let him take me where his will leads me.

He walks me backward until we reach a wall and he opens a flimsy door, pushing us inside, before closing the door and locking it behind us. It's an office. An old oak desk sits at the far end, dented metal filing cabinets lining the faded green wall.

Dallas runs his hand down my leg and pulls it up over his hip. I allow him to mold me to him. The heat coursing through my body and building between my legs has me eager for whatever he's willing to give me.

He tugs on my standing leg, and I give it to him, wrapping my legs around his hips. He props me up against the wall next to the door and ravages my mouth with kisses so passionate, I'm moaning against his tongue. I'm utterly lost in him. In his smell, his slick tongue, his prickly facial hair, his hot breath on my cheek, and along my neck when he drops his kisses below my ear.

Angeline is a Scorpio living in the Rocky Mountains with her husband and dogs. She loves all things paranormal, believes ghosts are real, werewolves aren't, and vampires? Definitely real! At least in the Vampire Born world they are. She is currently at work on her first New Adult Romance, Wicked Thing, which releases September 2013.