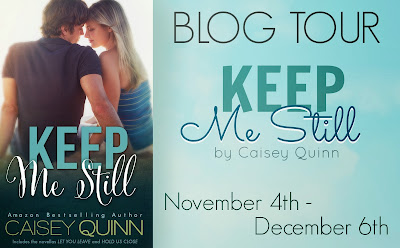 I am super excited to have the tour for Keep Me Still by Caisey Quinn, hosted by Inkslinger PR, on the blog today. I adore Caisey Quinn and she did not disappoint with this one. Check out my review and enter the giveaway.

Keep Me Still
(Keep Me Still #1)
(Keep Me Still #1)
Author: Caisey Quinn
Publisher: Self-published
Publication Date: November 11, 2013
Genre: New Adult/Contemporary
Source: eARC via Inkslinger PR
~Synopsis~
Layla Flaherty had the perfect life, or close to it. Until a stranger gunned her parents down right in front of her, leaving her with seizure inducing PTSD. After years of trying to pass as normal and failing miserably, she resigns herself to being invisible. But new to town Landen O’Brien sees her, and he likes what he sees. Much to Layla’s surprise, he doesn’t freak out when she has a seizure in front of him. He does the exact opposite, calming her until the tremors subside. But Landen has secrets of his own. Secrets that both bind them together and tear them apart.

Scarred by loss, Layla leaves her hometown of Hope Springs, Georgia, hoping to put her painful past behind her and start over in college in California. When she runs into Landen at freshmen orientation, she has a choice to make. Reinforce those steel walls she's built up around herself or give the only boy who can keep her still a second chance.

Landen’s more than ready to tear down those walls but this time when they come crashing down, they might bury her. 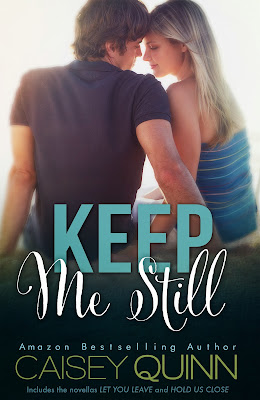 Freaking crap! Caisey Quinn really knows how to punch me in the gut. It’s been a while since I’ve read such an emotional book and I was a wreck from the beginning to the end. Layla and Landen are two very tragic characters and they have both suffered a great deal of trauma throughout their lives. My heart broke several times for them as they tried to maneuver through this maze of life.

Layla lost her parents in the most violent manner and she has suffered greatly since then; both physically and emotionally. She has become the freak, the outcast and as much as she tries to play it off, it hurts her deeply because no one wants to be the outcast. When Landen moves to Hope Springs, he is instantly intrigued by Layla and he doesn’t care what everyone says about her. He has his own secrets and problems and he isn’t one to judge. Just as they are on the verge of something really great, life tears them apart. When they both end up at the same college several months later, Landen sees his second chance and he’ll do anything to win Layla over again. Layla is looking for a fresh start and seeing Landen again confuses her. She wants to let him again but she’s afraid. She barely survived her first broken heart and a second one would shatter her.

“I touch the scar above my left ear to remind myself. It’s my permanent reality check. The one I need to remind me of the truth. Everything can change. Everyone can leave.”

I really liked Layla, a lot. She is a very strong character and all she wanted was to be normal and not be thought of as “Freaky Flaherty.” I never felt like she felt sorry for herself one bit throughout the entire book. She had a lot of shitty things happen to her and she still held her head high. She definitely had her low moments but who wouldn’t with the things that she went through. The greatest thing about Layla is how well she picks herself up and forges on. She’s been broken a time or two but she doesn’t let it deter her from living life. She definitely grew a lot as a character and she was a much stronger person when she went off to college. No one knows her or her tragic past and she can finally open up a little and experience new things. Seeing Landen again is scary and thrilling all at the same time for her. He really tore her up and giving him a second chance means letting her guard down.

God, Landen. I don’t even know what to say about him except that I just wanted to hold him in my arms. He’s had a really shitty childhood and his dad is a major asshole. Landen definitely has walls and they’re tall ones. It makes me so sad that Landen sees violence as a way to deal with his emotional pain.  When he let Layla slip through his fingers, it majorly screwed him up. She’s the only one he’s ever let through those walls and he is majorly torn up without her. It is so obvious how much he loves her and the way he took care of her was incredibly sweet. Most importantly, I loved how determined he was to get his second chance and to prove to Layla that he would never hurt her again. He wanted that second chance to prove to her how much he loved her and needed her in his life.

Layla and Landen are so perfect for each other and I loved instant chemistry between them. I could definitely feel it rolling off of the pages and I felt so connected to them from the beginning. I was actually heartbroken when they were separated and I could feel their pain within me. I may have choked up a little too. Even though their separation was heart-breaking, I felt like it made Layla a little bit stronger. She got through her heart break and came out stronger and more confident. Landen, on the otherhand, may have spiraled down a little bit but I loved the fight he had in him and when he got his second chance, he wasn’t about to waste it. I may have melted a little bit when they finally shared their first kiss and the first time they are together was equal parts steamy and romantic. Landen is hiding something from Layla and when she finds out, she feels extremely betrayed. I could see why she felt that way but I understood why Landen did what he did and it was definitely out of love. No matter what, he wanted Layla back in his life and he wanted her forever. I think Layla let her emotions and insecurities control her reaction to Landen’s “betrayal.” With a little encouragement and a lot of tough love from Corin, she realized her overaction and she went after the one person who she can’t let walk away. Landen and Layla have a long and tough journey ahead of them but together they can overcome anything.

“It’s love. Plain and simple. You love someone, you show it. Every day, up until your last.”

I really liked the side characters in this book too, especially Corin and Skylar. Corin is Layla’s roommate and her first real girlfriend. Corin is tough and she isn’t afraid to speak her mind. I definitely think Layla needed someone like her in her life. She doesn’t bullshit and I really liked how she looked out for Layla. When we get a little glimps into Corin’s life, it’s obvious she has a past she’s trying to hide and overcome too and I hope we get to explore that in a book of her own. Skylar is Landen’s teammate and roommate and he is interested in Corin. He comes across as a player but I think there is definitely more to him as well. He seems like a really decent guy and I’d love to get to know him more too.

Overall, this book was incredibly intense and it was my first book hangover in a while. My heart was still on fire for hours after I finished. Once I picked up Keep Me Still, I could not put it down. It was really well written and packed an emotional punch. The characters were so well developed that I was emotionally attached to them long after I finished reading. I knew Caisey was an incredible writer from the Kylie Ryans series but she further proved her range with this book and her books will forever be on my most anticipated list.
~IPOD Picks~
“Everything Has Changed” by Taylor Swift & Ed Sheeran
“Our July in the Rain” by He is We
“The Right Way” by Ron Pope

Debut Indie Author. I write New Adult books about country girls finding love in unexpected places. <3 Wearer of cowgirl boots, writer and avid reader of New Adult romance, lover of wine, addicted to chai tea lattes. Brand spanking new author of soon to be released books including Girl with Guitar and Keep Me Still (which may or may not include spanking). Gemini, wife, mom, and former high school English teacher living in Birmingham, Alabama. I spend my days chasing a three year old and hiding away with my Macbook. I spend my nights writing because sleep is overrated. I love hearing from readers and other writers, and those freaky hybrids like myself! You can email me at caiseyquinn @ gmail (dot) com or follow me on Twitter @CaiseyQuinn.
You can find me on Facebook https://www.facebook.com/pages/Caisey

*An eARC was provided to me by the author in exchange for a fair and hones review. All opinions expressed are my own and unbiased.*