The Storm Rolls In...

Are you ready for the storm? The first book in E. Lee and C. Quinn's Broken Heartland Series, STORM WARNING, has a cover and I get to share it with you today! Check out how pretty it is and then look below to read all about the title and the authors. There is also a STORM WARNING Book Trailer reveal for you!

I absolutely love both of these ladies and their incredible writing so I am unbelievably excited to read a book they have collaborated on together! 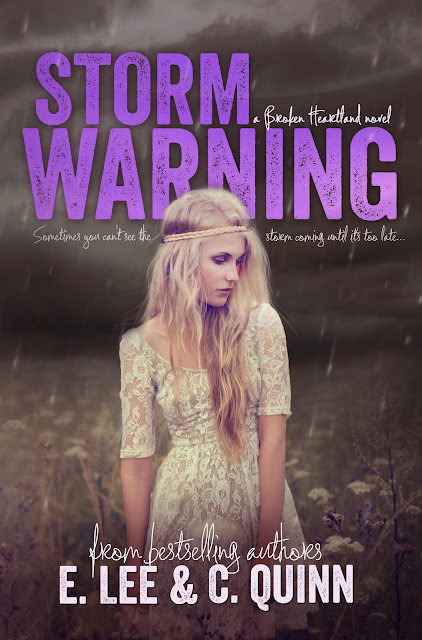 Isn't it gorgeous?!? STORM WARNING is an edgy Young Adult Contemporary novel and is scheduled to be released December 12, 2013.


Sometimes you can't see the storm until it's too late...


Be alert to changing weather conditions. Look for approaching storms.

Severe Storm Warning Tip #2:
If you see approaching storms or any of the danger signs, be prepared to take shelter immediately.

Severe Storm Warning Tip #3:
They may strike quickly, with little or no warning.

Situated just outside of Oklahoma City, Calumet County is divided into two drastically different communities: Hope’s Grove and Summit Bluffs. One is the small backward town where dirt roads lead the way to field parties and railroad tracks. And the other, a sprawling suburb where paved drives lead to the landscaped lawns of the wealthy and privileged.

For five teenagers smack in the middle of Tornado Alley, summer is heating up fast. The winds of change are blurring the invisible line that divides the rich and the rural.

One has a secret.
One has a crush.
One has been lying.
One will get caught.
And one might not make it out alive.

They’re from two different worlds…but one summer is about to change everything.

Whether you believe in destiny, divine intervention, or just plain ol' dumb luck, several things happened in 2013 that caused E. Lee and C. Quinn's paths to cross. It may have been that the stars aligned perfectly, or the fact anytime Luke Bryan was mentioned on a social media site both of them were tagged, or maybe it was just that their small town roots and country girl attitudes were magnetically drawn together—calling out to one another, “Y'all should write a book!” Despite geography keeping them apart—Lee in Illinois and Quinn in Alabama—they did. Thanks to three-hour phone calls, ridiculous amounts of online chats, and umpteen Google Docs—Storm Warning is the first book in their edgy new Young Adult series,  Broken Heartland.