Release Day Launch ARC Review + Giveaway: The Thrill of It by Lauren Blakely

Some say love can be an addiction. Others say it's the thing that makes life worth living. Let me tell you everything I know about love...Love isn't patient, love isn't kind. Love is a game, a chase. A thrill. Love is wild and war-like, and every man and woman must fight for themselves. At least that's how it was for me. A high-priced virgin call girl by the time I started college, I was addicted to love and to sex. Even though I've never had either. I controlled love, played it, and held the world in the palm of my hands. Then I fell down from those highs, and I'm being blackmailed for all my mistakes, forced to keep secrets from everyone, except the only guy I don't regret.

With all the other women, I knew what they were. They were temporary. They were pills, they were bottles, they took away all the pain, and numbed the awful memories that wore down my ragged, wasted heart. Until I met Harley. She's the only girl I ever missed when she walked away. But now she's back in my life, every day, and there are no guarantees for us, especially since I don't know how to tell her my secrets. What happened to my family. All I know is she's the closest I've ever come to something real, and I want to feel every second of it.

How can you love with no regrets when regret is all you know? 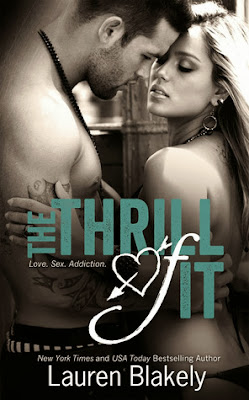 This book is so different from anything Lauren has written before and you know what? I LOVED it! This is further proof that Lauren is a super talented writer. Lauren is known for her fun, romantic contemporary novels and The Thrill of It is a bit edgier and more new adult. I loved how raw and gritty this novel is. I’m not sure if I’ve met two characters more perfect and right for each other than Harley and Trey are.

Oh my gosh, I was enthralled with Harley and Trey from the beginning. The chemistry between them was written all over the pages and I could feel it in my bones. There was something so sweet and tender in their relationship and I felt butterflies from touches as simple as holding hands. Considering their chance meeting again after an incredible night together, it’s as if they were written in the stars. However, overcoming the vices that have marred their pasts takes precedence and they must fight their desires for one another as they build a friendship.

Harley made me so damn sad and I really felt this despair radiate off of her. Her mother is a piece of work and she has always treated Harley more like a sister than a daughter and some of the things her mother shared with  her APPALLED me. I would rather cut my ears off than hear those things from my mom. Despite all this, Harley clearly loves her mother and wants to please her. I think she still holds out hope that her mom will actually be a mom. She has never really known true, unconditional love and I definitely felt like she was skeptical to believe it existed. It also played a huge role in her decision to be a call girl. She needed the power and control and thrill it brought with it.

“Love isn’t a quilt. Love isn’t patient, love isn’t kind. Love is a game, a chase, a thrill. Love is wild and war-like, and every man and woman for himself.”

Trey’s family has suffered a lot of loss and his parents didn’t grieve in a healthy way, which ultimately trickled down to Trey. He uses sex and pleasure as a way to cope and numb the pain. Like many people in addiction therapy, Trey hit his rock bottom and he is trying to climb his way out. Meeting Harley is both a blessing and a curse because she may be exactly what he needs but to heal he has to curb his desire for her and that becomes harder the more time they spend together. However, I could tell that Harley wasn’t just another “fix” for Trey. She is so different from the other women and she won’t just numb the pain, she can completely alleviate it.

“Life. It’s what’s happening now. It’s the real, scary, dangerous, amazing possibility in front of me. There are no guarantees.”

One of my favorite things about this story is the fact that Trey and Harley are upfront with one another about all of their secrets and the sordid details of their past. They build this amazing friendship and fall for each other with eyes wide open, no ugliness to come between them. However, they both have a lot of self-worth issues and neither believes that someone could actually LOVE them. They are both tempted every day, especially Harley, to go back to their old ways but they help each other, make each other stronger. Trey opens up and learns to let someone in and cope with his grief. Harley learns to confront her past and stand up to her mother.

I was so conflicted by Harley's mother at first because she seemed to love Harley but she had a very weird way of showing it. Harley is ashamed of the things she's done and never wants her mother to know her secret but I feel like her mother is the one who should be ashamed. She made Harley who she is and then has the nerve to judge her. This was where I decided I was no longer conflicted and decided I despised her. I loved it when she finally stood up to her mother. It was pure vindication and I may have done a fist pump for Harley. While I wasn’t a fan of Cam and the way he exploited and manipulated Harley, I felt like he cared for her and respected her more than her mother. He was a bit sleazy and he saw the dollar signs that Harley produced but he also wanted her to be happy and I saw that when he let her go. Kristen was a good friend and I was glad that Harley was able to open up to her and that she didn’t judge her. Harley finally had people in her life who loved her for her and not for what she could do for them.

“I am not my past. I am my present. I am my future. The past can chase you if you let it. You can spend your life trying to outrun it or you can stop running, turn around and look it in the face.”

Despite the vast difference in style from Lauren’s normal novels, the intimacy screams Lauren Blakely; hot and sexy. The passion between Trey and Harley is palpable and I was on edge every time they were alone together. Despite the darkness that surrounded them, they brought light and color to each other’s lives. They decided not to let the past define them and instead chose the future, they chose happiness. However, it isn’t quite HEA yet because their story isn’t over and the ending, HOLY CRAP! I definitely wasn’t expecting it and my heart may have beat right out of my chest when I finished. While it isn’t exactly a cliffhanger, it definitely left me wanting more Trey and Harley now.
~IPOD Picks~
“Tonight” by Boyce Avenue
“All We Are” by Matt Nathanson
“Why” by Second Hand Serenade 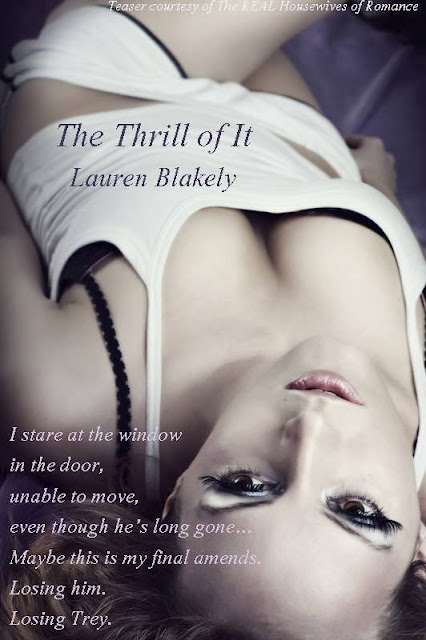 Lauren Blakely writes sexy contemporary romance novels with heat, heart, and humor, and her books have appeared on the New York Times, </ span>USA Today, Amazon, Barnes and Noble, and iBooks bestseller lists. Like the heroine in FAR TOO TEMPTING, she thinks life should be filled with family, laughter, and the kind of love that love songs promise. Lauren lives in California with her husband, children, and dogs. She loves hearing from readers! Her novels include Caught Up In Us, Pretending He's Mine, Playing With Her Heart, Trophy Husband, and Far Too Tempting. On November 21, she'll release the edgy new adult novel THE


THRILL OF IT. She also writes for young adults under the name Daisy Whitney.