Review: Caught Up in Us by Lauren Blakely

Caught Up in Us
Author: Lauren Blakely
Publication Date: January 20, 2013

Five years ago, Kat Harper fell into a dizzying summer romance with her brother's best friend Bryan. It was a mad, crazy love full of kisses all through the night -- but he broke her heart and she had to move on. Five years later, Kat is finishing her graduate degree and building her business as a jewelry designer, when Bryan, head of his own successful company, walks back into her life. Bryan has been assigned to Kat as her new business mentor and the rules are clear. No hanky panky permitted. Kat can handle that because she's totally over him... right?
Except, he still makes her laugh, and he remembers all the things she likes. Not to mention that he's even more handsome now than he was then. Then there's the spark between them -- the simply undeniable chemistry, and the tender ways he shows he still cares for her. Can they resist each other the second time around or will first love trump all? 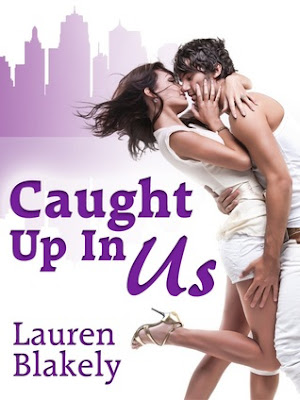 ~Prelude~
Before I read this book, I was reading In Too Deep and that book was intense and emotional torture. I immediately needed to read something that would be fun, light and romantic. I knew Lauren Blakely wouldn’t disappoint me. After recently reading Trophy Husband, I knew I could count on one of her books to pull me out and make me laugh, smile and brighten my mood. Thus, I began reading Caught Up in Us. Now that my little monologue is out of the way, onto the review!
~Review~
Caught Up in Us was a fun, light and romantic read and just what I needed from Lauren Blakely. I picked this book up for my kindle several months ago but hadn’t gotten around to reading it quite yet. I can’t believe I waited so long.

Kat is a successful jewelry designer in the final months of grad school at NYU when she has her first love, Bryan, who broke her heart 5 years ago, thrust back into her life. Immediately, she plays it cool and professional with Bryan, even though it is killing her to see him again and I loved that about her.

I was Kat’s biggest cheerleader when she gave Bryan the cold shoulder and cool indifference to everything he said. He had crushed her and then had the nerve to be flirty and act like nothing had happened. The fact that she didn’t show how much he still affected her was sheer awesomeness. However, that didn’t last long and I am pretty sure if I was ever heartbroken like that, I would be a total bitch because I wanted her to make him suffer a hell of a lot longer than she did.

“If I were a rock star, I’d have Taylor Swifted him and written one of those anthemic I don’t love you anymore songs.”

Bryan was a successful business man himself and very mature and professional. I wanted to dislike him because of what he did to Kat and how much he hurt her but I just couldn’t stay mad at him as he furiously worked to get back in her good graces. As the book flashed back to what happened between them that summer and how it all went down, I saw something in Bryan that Kat hadn’t seen at the time and it softened me towards him.  He so obviously adored her and wanted to reconnect with her and prove himself. She was undeniably in love with him so that happened pretty quickly (much to my dismay at first).

When they finally gave into their desires, it was steamy but they had a few obstacles preventing a full reconciliation and were forced to hide their budding romance. However, they made it work; oh did they make it work. I was blushing from how much they made it work. However, because they couldn’t have a fully open relationship, Kat had doubts about Bryan’s feelings and intentions, especially after the heartbreak she had experienced before. When she found out the truth about why he broke up with her all those years ago, she was understandably upset but then Bryan gave his little “I love you” monologue and even I melted a little inside.

“I understood the meaning of the word swoon- I had become the very definition.”

In the end, choices were made, it all worked out and Kat and Bryan got their happy ever after. It’s what I expected from a book like this and I wouldn’t have it any other way. Lauren will forever be my go to author when I have had too much intensity and angst and need something to make me laugh, maybe blush a little and believe in love and happy ever after. She is going to need to write faster! :-) J/K Lauren

“Then I kissed him, and though his kisses had always made me melt, this kiss was the very best of all.”


“Locked out of Heaven” by Bruno Mars
Posted by Unknown at 12:30 AM