Review: The Sea of Tranquility

~Synopsis~
Former piano prodigy Nastya Kashnikov wants two things: to get through high school without anyone learning about her past and to make the boy who took everything from her—her identity, her spirit, her will to live—pay.Josh Bennett’s story is no secret: every person he loves has been taken from his life until, at seventeen years old, there is no one left. Now all he wants is be left alone and people allow it because when your name is synonymous with death, everyone tends to give you your space.Everyone except Nastya, the mysterious new girl at school who starts showing up and won’t go away until she’s insinuated herself into every aspect of his life. But the more he gets to know her, the more of an enigma she becomes. As their relationship intensifies and the unanswered questions begin to pile up, he starts to wonder if he will ever learn the secrets she’s been hiding—or if he even wants to. 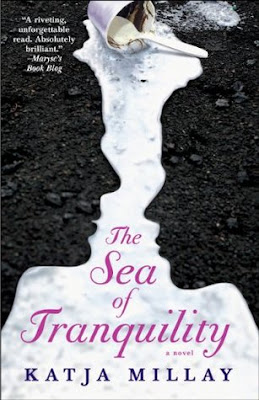 ~Review~
I never thought I'd read a contemporary YA book that I would love as much as Pushing the Limits; then I read The Sea of Tranquility. This book was intense, beautifully haunting and invoked so many emotions in me. Right from the prologue, I was hooked and along for an emotional ride.

Nastya is a young girl who suffered a major tragedy 3 years ago and she just wants to get away. She wants to be somebody else and she wants to go somewhere where no one knows who she is or what has happened to her. She goes and lives with her Aunt Margot and enrolls in school for her senior year. From the beginning, I could tell that she had severe emotional damage. She held a lot of anger, resentment and self- loathing and it showed in the way she acted. She dressed a certain way because she knew people would stare and she wanted to give them something to stare at.

I loved Nastya and her personality. She had this don't take shit, no nonsense attitude and it really added a little lightness to the book, which I really needed among all of the intensity. She was instantly drawn to Josh, as if she could sense that he was as damaged as she was. The first time she showed up at his garage, I loved their interaction and I loved watching Nastya grow to trust Josh and let him help her deal a little. The more time she spent with him, the better she seemed to be. However, it was clear she was still very damaged and my heart broke a little when she pushed Josh away. I so badly wanted her to open up to him and tell him everything but instead it all came crashing down.

Josh had literally lost everyone he truly loved in life and it made him a very cynical and damaged seventeen year old. He refuses to really get close to anyone and I think he truly believes he will spend forever alone. My heart broke a little for him when he told Nastya that he believes in God but thinks that God hates him. He is so indifferent with Nastya in the beginning because I think he is afraid to get close to her. When she continues to show up at his garage every night despite the way he acts towards her, I think he starts to enjoy her company and I loved watching his transition and change towards Nastya. Perhaps my favorite part of this book was seeing Josh change and fall in love. I wanted him to fight harder when she pushed him away and I think he wished he would have too.


"I believe in God, Sunshine. I've always believed God exists," he says. And what he says next isn't self-pity or angst or melodrama. It's truth. "I just know that he hates me."

This book had really great side characters, Drew and Clay, in particular. Drew was the cocky, popular jock who instantly tried to work his magic on Nastya. She found him fun and entertaining and even though everyone thought they were hooking up, they formed a mutual alliance and actually became really good friends. Drew was also Josh's best friend and I loved the connection those two had, even though they are both very different. Drew grew so much in this book and they way that he protected Nastya and was there for her when she needed him towards the end really showed his maturity. Clay was an outcast, like Josh and Nastya, and I loved the friendship she developed with her. He saw all of the pieces of her and through all of her bullshit and the act that she put on. She helped Clay with his art competition and without knowing, Clay was able to help Nastya with some closure.

This book had such a beautiful plot. It was filled with tragedy, heart break, love and loss. But most of all, it was filled with second chances. Second chances for love, second chances to live, second chances to do things right. Towards the end, Josh and Nastya both made bad decisions to hurt each other and they both were strong enough to recognize the mistakes that they made. He loved her so much that he was williing to let her go so that she could get better because he recognized that she needed more than he could give her. Letting her go was harder than losing anyone he had ever lost because he could never bring them back but she was still very much alive. She realized that she does want to live and loving Josh gave her something to truly live for. She knew that getting better would take work and that she may never truly be okay but she knows now that she wants to be.


"I haven't gotten better. I'm not even close to okay. The only thing I've done is decide to get better. But I think that may just be enough."

This book really stuck with me and I found myself thinking about it hours after finishing it. I know I have read an amazing book when it has had a profound affect on me and The Sea of Tranquility has done that. If this is Katja Millay's first novel, I cannot wait to see what she will come up with next.

~IPOD Picks~
"Stay" by Rihanna
"Landslide" by Fleetwood Mac
"A Drop in The Ocean" by Ron Pope
"Ships in the Night" by Matt Kearney
Posted by Unknown at 10:52 AM