~Synopsis~
After Kylie’s dad dies in a freak accident, he leaves her with nothing other than her crazy step-mother, Darla, and the ability to play guitar. When Darla kicks Kylie out and she loses her job all in the same day, she hops a bus to Nashville determined to make her late father’s dreams come true. Waitressing and saving her pennies to record a demo, her big break comes when she’s asked to join a tour going down the tubes with once platinum album-selling country music superstar Trace Corbin. But touring with Trace is hardly a dream come true since he’s pretty much drinking his career down the drain. If Kylie can’t pull Trace out of his rut, he’ll pull her and her dreams down with him. 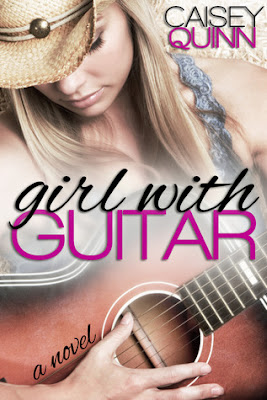 ~Prelude~
I had seen this book around on Amazon after it was released a few times but hadn’t paid much attention to it. Then my blog buddy, Jessica @ Lovin Los Libros, said “Let’s buy this” on twitter and I said “Ok, I’m in.” I am a country girl at heart so I’m sure glad I am so easily influenced. I put my country playlist on and spent a Saturday afternoon breezing through this book.  Anyway, without much ado, here is my review. (That rhymes, I know!)
~Review~
First of all, I loved the concept behind this book. It is all about going after your dreams and doing whatever it takes to make them come true. And hey, if you find love along the way then that is an added bonus. This was a heart-warming, tear-jerking, beautifully written story. At one point, a tear actually rolled down my cheek before I even realized it was happening. I was that immersed!

Kylie was a girl to be admired. She had nothing but her guitar and her dream of making it big. She recently lost her father, the last piece of family she had and after being kicked out of her house and losing her job, she decided to take life by the horns and jumped on a bus to Nashville. With only enough money to live for a week without being homeless, she finds herself with a job at a popular bar where she is scheduled to sing on amateur night in a few weeks. That job and that night changes her life forever.

“Look away, her subconscious screamed. But she couldn’t because for the first time since her daddy died, she was alive.”

She is super feisty and can throw down with the best of them. I love the way she puts Trace in his place and never lets him intimidate her. Even as she is melting inside from his raw sexiness and her lust for him, she puts on her big girl panties and tells him exactly like it is. She is very emotional and she makes all of her decisions using those emotions, which is definitely a weakness for her. Show business is ruthless and she learns that with a few hard lessons.

My first impression of Trace was certainly not a good one. In fact, my first thought was “This guy is a dick.”  He is certainly a man who must grow on you and definitely not the guy you instantly fall for. He was self-destructive and selfish and never considered how impactful his actions were on all the people around him. However, he held a lot of respect for Kylie, even if he didn’t show it and he was clearly as attracted to her as she was to him. I softened towards him when he introduced Kylie to his family and I learned a little more about his childhood. It gave me insight into why he acted the way he did and what drove him to his actions. I also respected him for the restraint he held when it came to Kylie because he clearly cared about her and wanted to do right by her.

“Trace Corbin should come with a warning label: highly addictive.”

As Kylie toured with Trace, I could feel the connection between them and how strongly it grew. They both had so much pain in their lives and as good as they were together, they were also just as destructive. Trace said some really hurtful things to her and I felt her pain deep in my heart. I also felt her loneliness and it broke me because she would give up everything to spend one more night with Trace. As much as she loves music, having someone to love and someone who loves her back would be more satisfying than anything else. Both Kylie and Trace grew a lot throughout this book and I liked the fact that they fell for each other but never said, “I love You” once in the book. It would have been too fast. The end was perfect and satisfying, even though it left me wanting more. I was left anxious with anticipation for book 2, Girl on Tour, which will be released in August.

“She didn’t know what he was looking for, but his eyes sought answers in hers that she didn’t have. She didn’t even know what the question was. She just wanted him. Like she had never wanted anything or anyone in her entire life.”

As a debut novel, this book blew me away. The writing was very well done and based on my gushing above; I would say that I enjoyed the plot and characters quite a bit. I loved Caisey Quinn’s “Thank You” after the book ended. I have been to a few Miranda Lambert concerts and Kylie reminds me so much of her. She has the same feisty spirit and the stage presence to boot. As for Luke Bryan, I love that his music and good looks inspired Trace and I, too, am thankful for his tight jeans.

~IPOD Picks~
“Lasso” by The Band Perry
“Doin' Something Right” by Billy Currington
“Starts with Goodbye” by Carrie Underwood
“Easy” by Rascal Flats
Posted by Unknown at 3:00 AM