~Synopsis~
Noelle Buckman is looking forward to making a fresh start in college, one that doesn’t involve immature high school boys. The second she steps on campus for freshman orientation, she can sense the possibilities. Especially when she spots Andy, a resident advisor who’s not just hot but also thoughtful enough to open doors for a girl. And Andy has his eye on Noelle. Even when her nerves take control and she thinks she comes off as a hillbilly with no direction, Andy can see what she’s really like and he’s more than a little interested.But orientation is less than two full days and there’s an entire summer between Noelle and Andy. Will her attempt to romance the R.A. be as short-lived as college orientation? 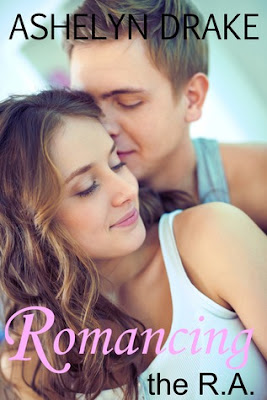 ~Prelude~
Romancing the R.A. was this week's #GwB read for the Twitter read-along with Trish @ Between the Lines, Jessica @ Lovin LosLibros, CeCe @ Steaming Mug of Books, Wendy @ Book Scents, Danielle @ What Danielle Did Next and Tonya @lilybloombooks.  I liked the synopsis when I read it and was excited to start this one and looking forward to it all week. I didn't realize it was so short and more like a novella so I was a little disappointed this week.

Romancing the R.A. was a light, fluffy and cute read. However, it was extremely short and not what I was expecting. I was a tad disappointed because of this. It was more like a novella and I prefer more depth to the novels that I read.

Noelle and her best friend, Julia are visiting the Timberland College campus for freshmen orientation at the beginning of the summer. They will be attending in the fall and they are there to get an introduction to the campus and the dorms and meet other incoming freshmen. Noelle meets Andy, a sophomore R.A. who she immediately is attracted to and finds a connection with. They spend some time flirting and getting to know each other a little. She ends up spending the night with him.

"As he turns and walks back to his seat, he meets my gaze, just for a second. And a second is all it takes to do me in. I'm so hot for the R.A."

I want to say that I liked Noelle and Andy but the book was so short that their wasn't much character development and I didn't feel like I really got to know the characters. Andy seemed like a really nice guy and Noelle seemed like she would be a likable character. I found her to be a little clingy considering she only knew him for a few hours but she couldn't stand to be away from him whenever they weren't together.

She also slept with him after only knowing him for a few hours but she talked a lot about being guarded and not easily trusting guys. That seemed a little contradictory to me. Even though she felt like he was a nice guy and she could trust him, it seems unbelievable that she would give it up that quickly.

I do understand that people can meet and have an instant connection but it was a little difficult to grab a hold of in this book. If it was a little longer and had some added depth to the story line and romance, I think I could have really gotten into it and liked it a lot more. Overall, it was a quick, easy, enjoyable read but I would have enjoyed it so much more if it was longer with more character and plot development.