~Synopsis~
With his tight leather pants and a sharp edge that makes him dangerous, Jet Keller is every girl’s rock and roll fantasy. But Ayden Cross is done walking on the wild side with bad boys. She doesn’t want to give in to the heat she sees in Jet’s dark, haunted eyes. She’s afraid of getting burned from the sparks of their spontaneous combustion, even as his touch sets her on fire.Jet can’t resist the Southern Belle with mile-long legs in cowboy boots who defies his every expectation. Yet the closer he feels to Ayden, the less he seems to know her. While he’s tempted to get under her skin and undo her in every way, he knows firsthand what happens to two people with very different ideas about relationships.Will the blaze burn into an enduring love. . . or will it consume their dreams and turn them to ashes?
~Review~
Tattoo artists, musicians, sexy war heroes. Jay Crownover really knows how to write a swoon worthy, delicious bad boy and she did not disappoint in Jet. I really liked Rule and everything about his character and his story with Shaw but had a few small issues with the writing. That was her debut novel and it is clear that the more she writes, the better she gets. The writing was dynamic and the plot flowed well and was less predictable with Jet.

I loved both Jet and Aiden and enjoyed the sexual tension and chemistry between them. It was obvious that Jet paraded women through his revolving door in an attempt to get Aiden out of his head. He has Aiden on this pedestal yet he is unable to fight the desire that he has for her. He is wound so tight and I couldn't have been happier when he finally gave into his desires if he had jumped into my bed. He could seriously see himself falling for Aiden and wanting from her what he had never wanted before and that scared him because he had a seriously screwed up father and home life and he wants to be better than that. He is a sexy musician who is loyal to his friends, his mother and his music. He truly is the total package!

I liked Aiden and found her to be a very strong female character. However, she is so afraid of who she was in the past and sharing it with those closest to her. She has fought so hard to become the hardworking, successful good girl that she worries being with Jet will unravel all of that. I think she underestimates just how good Jet could be for her and she only sees the sex god musician and none of the other sides of him. When she does get a glimpse of the other side of Jet, she starts to fall hard for him and realizes that he could be everything she needs and more. However, when her past comes back to haunt her, she feels like pulling away is the only way to protect him. These sorts of plots leave me with all sorts of anxiety. I know it is going to happen yet I get all nervous and squeamish when it does. Why do I do this to myself?

Aside from rock awesome characters, including some appearances from the sexy tattoo artist and the  other marked men, I really enjoyed the love story and plot behind this book. While I loved the plot behind Rule, I found it a little too predictable but this book held a little less predictability for me. Aiden held a certain mystery within her past that was slowly revealed so as to keep me intrigued until it all came to a dramatic conclusion. I also really loved the story line revolving around Jet and his family. While I wasn't surprised by the turn of events, I can't say that I could outright predict them and I really liked that. I felt like the author did an amazing job of weaving Aiden and Jet's stories together into one and I was very satisfied by the conclusion. Rome is the next Marked Man up and I can't wait to read his story.
~Quote~
"I felt like I had been starving for this my entire life and now the seven-course meal that was Jet Keller was mine for the tasting and I was about to turn into a gluttonous beast." ~Aiden (Jet by Jay Crownover) 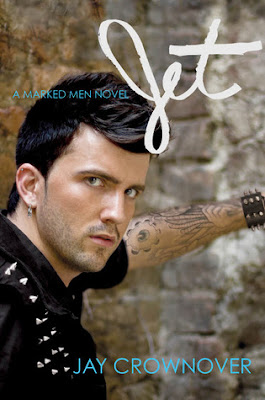