Review: Unbreak Me by Lexi Ryan

~Synopsis~
“If you’re broken, I’ll fix you…”I’m only twenty-one and already damaged goods. A slut. A failure. A disappointment to my picture-perfect family as long as I can remember. I called off my wedding to William Bailey, the only man who thought I was worth fixing. A year later, he’s marrying my sister. Unless I ask him not to…“If you shatter, I’ll find you…”But now there’s Asher Logan, a broken man who sees the fractures in my façade and doesn’t want to fix me at all. Asher wants me to stop hiding, to stop pretending. Asher wants to break down my walls. But that means letting him see my ugly secrets and forgiving him for his. With my past weighing down on me, do I want the man who holds me together or the man who gives me permission to break?
~Review~
Unbreak Me was a really heart wrenching book and the plot was very deep and emotional. This was definitely not a light and fluffy read. I really felt the pain and devastation that Maggie was going through.

Maggie was a very broken character. Even though she was snarky and appeared self confident, it was clear that it was more of a self-loathing confidence. She hid behind her body and her sexuality to cover up how broken she was. She was only 21 but everything she had been through was devastating and after always being made out to be the bad one, she had started to believe what everyone said to her and really hated herself. This made it hard for her to love others because she was too busy punishing herself.

Will and Asher were two men who both loved Maggie and wanted her love in return. The problem with Will was that he was always trying to fix her, always needing Maggie to need him. Asher didn't want to fix Maggie, he just wanted to show her that she was worth loving. While I liked both guys, it was never a question for me that Asher was the guy for her. He didn't see her as broken and needing fixed, he saw her as lost and needing to be found.

The author did such a great job of shrouding Maggie's past so as to keep the book from being predictable. It was impossible for me to guess what really happened to Maggie and all she had been through that made her who she was now. As each piece is revealed, I kept thinking "When is this chick going to catch a break?" Every time she tries to put a life together, one more thing just brings her down. In the end, I think Asher, and Will in a way, helped her realize that she is worth loving and that while she made some poor decisions, she was also victim of circumstance.

Not only did she find a way to piece back her relationship with her family, especially her mother, but she learned how to move on and let the past go. She learned to love herself, let others love her and began piecing herself back together. This is my first Lexi Ryan book but I will definitely be checking out more of her work.

~Quote~
"He lifts my hand to his lips and kisses along the line of the stitches running down my palm. "If you shatter, I'll find you." ~Unbreak Me by Lexi Ryan 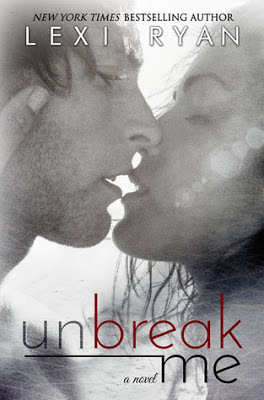 So the author included a playlist at the end of the book and some of the songs are on my IPOD so I have listed them for my IPOD picks but I want to give Lexi the credit for them.
~IPOD Picks~
"How to Save a Life" by The Fray
"Just Give Me a Reason" by Pink featuring Nate Ruess
"Stay" by Rihanna featuring Mikki Ekko

For her complete playlist, check it out at the end of Unbreak Me.
Posted by Unknown at 2:00 AM