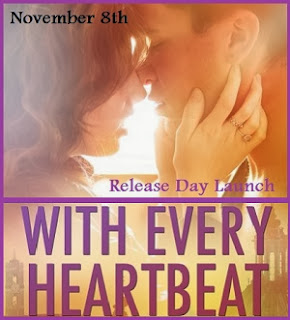 Melody Grace's WITH EVERY HEARTBEAT is being released TODAY and I am so excited to join in the release day launch for it. WITH EVERY HEARTBEAT is an enchanting New Adult Contemporary Romance in Melody's new Cities of Love Series. Check out my review and then enter to win in the release day launch giveaway! You could win a set of e-copies of Melody Grace's Beachwood Bay Series that are currently available. There's also a fantastic excerpt for you to check out!

I thought I knew what I wanted in life. I thought my destiny was set. Then I met him, and everything changed.

Raphael is bold, passionate, and seductive. He sees something in me I never dreamed possible, and now he's determined to show me a world beyond rules -- a dance without limits. I want to trust him, but I'm scared. Because I know once I fall, there'll be no going back.

An innocent dancer. A mysterious stranger. As Annalise is drawn deeper into the romantic delights of Rome, she'll question everything she believed about her future. But with opening night looming, can she find the strength to risk it all? And will she be forced to choose between her one true love, ballet, and the new passion in her heart? 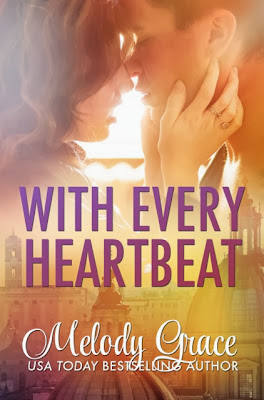 I had so many feels while I was reading this book and it was such a sweet romance that I felt my heart flutter more than a few times, even from just the sweetest of kisses. This book was so much more than a love story. It was about self-discovery and finding what you truly want from life and going after it, regardless of what others want.

At 19, Annalise is a professional ballerina with the American Ballet Company and it is all she ever wanted. She has spent her life training to someday be a Prima Ballerina like her mother was and this trip to Rome may be her last chance to earn a solo and move up in the ranks of the company. While exploring Rome, she comes across Raphael, a contemporary street dancer, and she is instantly enthralled by him. They share this undeniable connection and love blossoms. However, being with Raphael and being a top ballerina isn’t so easy to juggle and in the end she may lose one or the other.

I really liked Annalise and I felt like she was a strong character. Ballet is all she’s ever known and has always been number one in her life. Her mother was a top ballerina and she really pushes Annalise. I felt like her mother was living her dreams through her even though at one time, she had it all. I could tell Annalise really loved dancing and ballet but I definitely thought a part of that came from wanting to make her mom proud and not let her down. That was definitely obvious when she met Raphael because she didn’t know what she had been missing out on all those years of only focusing on ballet. Being with Raphael definitely opened her up to new and exciting experiences and I loved how she embraced it and really set out to discover what she wanted and not what was expected of her.

Raphael seems like a genuinely good guy and he is immediately taken with Annalise. It was so obvious that he liked her and he wasn’t shy about showing it.

"I melt into him, swaying against his torso. If the kiss the other night was blazing and wild, this is dangerously sensual. Raphael's lips are cool on mine, slow and bold. His tongue slides into my mouth, exploring, probing, and all the while his hands stroke across my back, bringing me closer to the heat of his solid muscular back."

I think Raphael really fell for her when she supported and encouraged his dreams of becoming a professional dancer. She saw the potential in him and she told him to grab life by the horns and go for what he wanted. I loved how much she helped him with his audition, even when she had her own rigorous training to complete. He would never have gone through the audition without her by his side. This is what I loved most about her. She wasn’t some stuck up, snobby ballerina. She danced because she loved to dance and she had an amazingly kind heart.

I really liked Karla and Rosalie too. They are her friends and roommates and they truly cared about her. Karla frustrated me at times because she encouraged Annalise to pursue Raphael but then she became angry with her for spending so much time with him and not “focusing” on her dance. I forgave Karla though because I think she was a bit jealous of her and she supported Annalise when she really needed her. Rosalie isn’t a dancer, but instead an assistant to one of the instructors so it was a lot easier for her to sympathize and understand Annalise. We get to follow Rosalie to Paris in the next Cities of Love installment and I can’t wait for her French love story.

I knew there would be a moment when things would get a bit out of control for Annalise and she would have make the decision regarding what she really wanted out of life. Unfortunately, she wouldn’t be able to have both, not on the current path she was on anyways. That moment came when her mother showed up. Her mother was a real piece of work and my heart broke for Annalise when her mother showed her true colors. In a way, I’m glad she did because this was Annalise’s turning point. She finally realized that no matter how much she succeeded in ballet, she would never be good enough for her mom.

“There’s nothing in this world I’ll ever love more than ballet.” Her voice cuts through me like a shard of ice. “And if you’re the daughter I raised, then neither should you.”

Annalise is vulnerable, confused and upset and when she perceives and action as betrayal from Raphael, I really felt her anger and despair. She is so young and this is her first love. She feels foolish and I wanted to say she was being irrational but considering how new this is all to her, I could understand her reaction. Despite her determination to focus on ballet only, it was obvious that she had really changed and her outlook on her future was clearly different. No matter how much she tried, even dance couldn’t mend her broken heart. I was glad Raphael didn’t give up on her and the moment she realized what she really wanted, I was left breathless. The ending to this book was absolute perfection and I really felt like Annalise was an even stronger character in the end. Most importantly, she was happier!

“When I’m with him, it feels so right, like the only place in the world I belong is in his arms. I feel more myself than ever in my life before: happier, bolder, stronger.”

I simply adored this book and this is a fantastic new series. I love the foreign setting and the cross-culture romance. Taking this journey with Annalise was so empowering and inspiring. It's so different from her Beachwood Bay series but in very good way. There is still the unmistakable writing style that belongs to Melody Grace but she has definitely branched out and I love the versatility. I want, no I NEED, more books from her.

A new burst of music sounds, pulsating and wild, and suddenly, my thoughts fade clear away, blotted out as completely as the sun during an eclipse.
I see him.
Standing, poised, waiting for his intro, his body proud and arched, arms raised. There’s a girl waiting beside him, his partner, but I only have eyes for him.
God, he’s gorgeous. Dark curly hair, tanned skin, and piercing blue eyes that seem to shimmer against the gold of his skin. He’s dressed in a starched white shirt and tuxedo pants that fit him like a glove. The breath is sucked from my lungs, and I feel a thrill ripple through me, a sensation I’ve never known before: anticipation, as if I know something important is about to happen. Something life-changing.
And then he starts to dance.
Dear Lord ...
I swear, time stops as I watch him move. It’s like nothing I’ve ever seen: part Latin ballroom, part street, part modern contemporary. And all of it totally devastating.
I stare, awestruck, as he plays out a wicked game with his partner: bringing her in, sending her away, lifting her as effortlessly as if she was made of air. His movements are bold, dominating. There’s no cheap grinding, or tacky thrusts, but somehow, every step oozes sensuality, such an intimate connection between the dancers that I feel myself start to blush.
It’s mesmerizing, out of this world, and I’m completely lost to it, caught up in the story of love and betrayal they’re telling with their bodies until at last, he whirls her out one more time and then pulls her back; dipping her so low her hair grazes the ground.
They freeze there, holding the pose. There’s silence, so pure you could hear a pin drop, and in that moment, he lifts his head and looks out across the square.
Our eyes lock.
It’s only a split second, those piercing blue eyes on mine, but I feel the moment stretch for an eternity. His gaze crashes through me, setting every nerve and sense alight, as if I’m touchpaper and he’s a molten spark, dancing through my bloodstream.
And then the thunder of applause breaks the spell, and I realize I’m digging my nails into my palms, gasping for breath.
Who is this man? 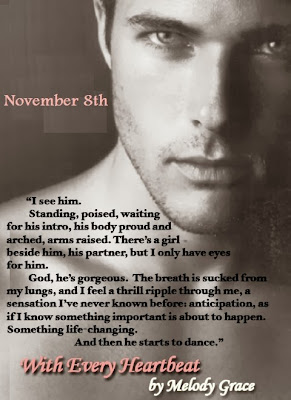 "Melody Grace has crafted a sweeping and emotional romance that pulls you in so deep, you won't ever want to surface. It's that good." –Sawyer Bennett


Check out this awesome book trailer!

*An eARC was provided to me in exchange for a fair and honest review. All opinions are my own and unbiased.*
Posted by Unknown at 12:00 AM