Today, I have the tour for Ruby's Fire by Catherine Stine, hosted by Xpresso Book Tours, on the blog today. I am excited to share a review and giveaway.

~Synopsis~
Seventeen year-old Ruby, long-pledged to the much older Stiles from the Fireseed desert cult, escapes with only a change of clothes, a pouch of Oblivion Powder and her mute little brother, Thorn. Arriving at The Greening, a boarding school for orphaned teens, she can finally stop running. Or can she? The Greening is not what it seems. Students are rampaging out of control and as she cares for the secret Fireseed crop, she experiences frightening physical changes. She’s ashamed of her attraction to burly, hard-talking Blane, the resident bodyguard, and wonders why she can’t be happy with the gentler Armonk. She’s long considered her great beauty a liability, a thing she’s misused in order to survive. And how is she to stop her dependence on Oblivion to find a real beauty within, using her talent as a maker of salves, when she has nightmares of Stiles without it?When George Axiom, wealthy mogul of Vegas-by-the-Sea offers a huge cash prize for the winner of a student contest, Ruby is hopeful she might collect the prize to rescue her family and friends from what she now knows is a dangerous cult. But when Stiles comes to reclaim her, and Thorn sickens after creating the most astonishing contest project of all, the world Ruby knows is changed forever. This romantic fantasy set in 2099 on earth has a crafty heroine in Ruby, and a swoonworthy cast, which will surely appeal to the YA and new adult audience. 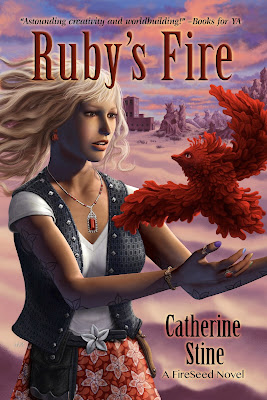 Ruby's fire is a very interesting futuristic fantasy novel and I found myself hooked from the beginning. The writing is fantastic and the setting is quite different from anything I've read. I haven't been reading paranormal and fantasy books much recently as I have moved more towards new adult and contemporary romance but I rather enjoyed this book.

Ruby and her brother are members of the Fireseed clan, where they worship the Fireseed plant as their God. When a young girl is of age (17) she is paired off to a much older man to be his mate. Ruby decides to flee with her little brother and she stumbles upon a civilization called "The Greening" where she meets other kids her age who are orphaned. At "The Greening," she learns so many things about society that were kept from her and she makes a startling discovery regarding the Fireseed that changes her life.

Ruby was definitely a girl I could get on board with. She was headstrong and tough. She didn't just lay down and let the clan force her to be with a man who was twice her age and disgusted her. She was brave and smart and she cared for her little brother very much. It would have been easy for her to leave him behind but she risked everything to take him with her. She isn't treated well by some of the other students but she still stood her ground and I loved that she didn't let them get her down. Despite their treatment towards her, she still tried to be the better person and I liked that about her.

Basically every other character at the school was cruel and I was not a fan at first. However, Bea turns around and becomes a friend to Ruby and I like her. Radius isn't that bad either, he never really does anything or says much to Ruby and Thorn. Jan and Vespra are absolutely awful and I don't like them one bit. Vesper is so jealous of Ruby that she is mean and spiteful. I wasn't sure about Blane at first but by the end I was definitely a fan of his. He is kind of a jerk at first but he shows a soft side every once and a while and it was obvious he had a thing for Ruby. He has been through a really tough time and that makes him hard but he is really smart and kind on the inside. Of course, Armonk is the only good guy there it seems at first but he is very shy and reserved. He also likes Ruby but he can see the connection she has with Blane and he respects that. I loved the way he was with Thorn.

This book had a very interesting plot. It felt like a fantastical dystopian to me. It is set far into the future, the year 2099 and the country has been ravaged by climate changes. Along with the dystopian setting, there is a bit of a fantasy theme revolving around the fireseed that gave it a little intrigue and mystery. Even though Thorn doesn't speak, he is actually really brilliant. While I liked the storyline and mystery, it took a bit to get into because it was a little out there. The farther I got into the book, the more crazy it got but I surprisingly liked it. It had a few unexpected twists towards the end that had me hooked to see what happened. One thing I really enjoyed was the development of the relationship between Ruby and Blane. There insane attraction to each other was fun to watch and Blane turned out to be a really great guy. I actually really liked him in the end.

Overall, I was surprised by how much I liked Ruby's Fire since I am not normally a fantasy reader and the farther I got into this book, the more fantastical it got. The writing was really well done and the character development was well done. I think this really made this a likable read for me. 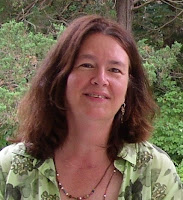 Catherine Stine writes YA, New Adult and middle grade fiction. Her YA futuristic thriller, Fireseed One, illustrated by the author won finalist spots in both YA and Science Fiction in the 2013 USA Book News International Book Awards. It was also granted a 2013 Bronze Wishing Shelf Book Award and a 2013 Indie Reader Approved notable stamp. Her YA Refugees, earned a New York Public Library Best Book. Middle grade novels include A Girl’s Best Friend.

Fireseed One sequel, Ruby’s Fire is earning advance praise from reviewers and authors:
“Ruby's Fire, returns to the sun-scorched earth of Fireseed One. In this long-awaited sequel, Stine delivers a thrilling adventure led by a new and exciting cast of characters. Ruby, Armonk, Thorn and Blane are memorable, and the romance is really well handled. Favorite quote: " It feels wrong to lean on Armonk right now with Blane staring at me, a hungry, lonely look in his eye. It’s as if he’s never been hugged, never been fed, never been loved..." ”  -YAs the Word

More and more, Catherine enjoys writing speculative tales where her imagination has wild and free reign. She has taught creative writing workshops at the Philadelphia Writing Conference, Missouri University Summer Abroad, The New School and in her own ongoing NYC writing workshop. She loves her readers, and enjoys blogging.

*An eBook copy was provided to me by the author and Xpresso Book Tours in exchange for an honest review. All thoughts and opinions expressed are my own and unbiased.*