Review: By Blood by Tracy Banghart

~Synopsis~
For 17-year-old Emma Wong, spending a summer in should be a dream come true. Gorgeous scenery? Check. Lots of hot guys with accents? Yes, please.

Throw in an estranged mom, annoying new stepdad, and drooling baby half-brother, and it's a disaster even her favorite cherry red leather jacket can't fix. Even worse, there's (hot) live-in research assistant Josh to contend with. The only thing more embarrassing than drunk-kissing him hours after they meet? Knowing he'll be witness to her family's dysfunction all. summer. long.

But when Emma meets a mysterious girl who happens to be a Druid, her vacation suddenly promises to be far more intriguing than she anticipated. Powerful rituals, new friends, an intoxicating sense of freedom...and Simon, the sexy foreign stranger she was hoping for. It's all a perfect distraction from dirty diapers and awkward family dinners.

Trouble is, intriguing doesn't often mean simple. And Emma is about to discover just how not simple her life really is.

By Blood is a novel about the ways that blood can bind us to others - or tear us apart. 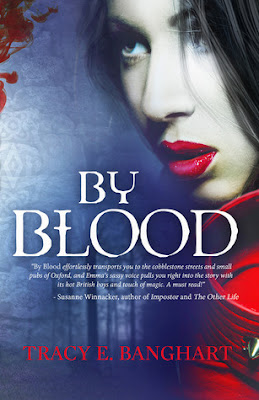 By Blood was a very interesting book with a fascinating plot and well developed characters. It was easy to get into from the beginning and stay connected to the very end. I didn’t find any slow points or moments when the plot lulled.

Emma was definitely a kick-ass chick but she was really broken up inside and she hid her pain behind anger and snark. She was resentful towards her mom and the feeling she had towards her mother’s “new” family. She was being forced to spend the summer in with her mother and her new husband and child. I totally understood Emma’s anger and I didn’t blame her for giving her mom the cold shoulder and resentment. I know they say you should “be the better person” but sometimes I just don’t want to and I was right there will Emma. She felt betrayed and unwanted by her mother and that’s to be expected when your mother cheats on your father and leaves. Even though, I liked Emma, she frustrated me a time or too with her naivety and the choices she made. However, she really grew a lot through out the book. She made a lot of poor decisions as she struggled to figure out who she was and who she wanted to be but that’s expected at 17 and the poor decisions opened her up to eventually making the right ones.

There were two love interests for Emma but it wasn’t really a love triangle. Simon was a total douche and Josh wasn’t, end of story. Of course, Simon is older and sexy and he has the accent to drive the girls mad so naturally Emma would be drawn to him. I knew there was something off about him from the beginning but he seemed genuinely into Emma and after Josh’s initial rejection, I wanted her to be happy. However, the deeper she got, the more suspicious Simon became. Josh, on the other hand, was kind, sweet and an all around good guy. However, he rejected Emma in the beginning and the suddenly he changed his mind when she started seeing Simon and all he did was confuse her. Despite his feelings for her, he was a friend to her above all else and he only wanted to make sure she didn’t get hurt. He saw right through Simon and he was determined to keep Emma away from him. I was rooting for Josh from the beginning and I think Emma was too even if she didn’t want to admit it.

Emma gets sucked into this “cult” that claim they are Druids and they perform spiritual rituals to become one with nature. She is introduced to the group, led by Simon, by a new friend she meets named Ash. Ash was really sweet and she took an instant liking to Emma. She was very zen and down to earth and she liked the “hippy” feeling of the Druid rituals. When things got out of hand, she recognized the signs and she tried to warn Emma. While I was suspicious of this group and the things they were doing, I was definitely surprised by Emma’s revelation of Simon’s true intentions. Josh and Ash both warned her about him but I wanted to scream when she allowed him to explain everything away and she still believed him over the people who really cared about her.

She dealt with a lot of personal issues between her mother and her, especially when a shocking discovery was revealed. It caused an even bigger rift between her and her mother. I think all decisions she made led back to her feelings of abandonment and her relationship with her mother. She joined the group because she felt lonely. She chose Simon over Josh to protect her heart. She resented her little brother because he was a part of her mom’s new life. As she opened her mind and her heart a little bit, she started to see things more clearly and making the right decisions. In the end, she grew up and resolved her issues.

Overall, I absolutely enjoyed reading By Blood. It was well written and the plot flowed very well. It was an easy read and held my attention from beginning to end. I will definitely read another book by Tracy Banghart.