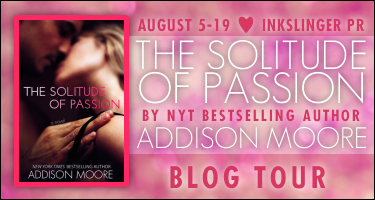 I am super excited to have the tour for The Solitude of Passion by Addison Moore, hosted by Inkslinger PR, on the blog today. I absolutely love Addison and her writing so I am so excited to share a review and excerpt with you today.

~Synopsis~
When old love and new love collide an impossibility is born.

When Lee Townsend’s husband leaves on a community outreach to China, the last thing she expects is for him to never come back—for him to have tragically met his demise.

Lee goes on to marry his adversary and settles into life and business with him, merging her vineyard with his and creating a worldwide conglomerate.

Five years later a twist of fate brings the past back to her and forces Lee to make a decision that will change the landscape of her life forever.

Secrets emerge, forcing relationships to be examined—magnifying the surprising true underpinnings of her marriage to both Mitch and Max.

Lee’s heart is unwilling to surrender her love for either Mitch or Max.
She must choose to carry forward with the past or present.

Lee has a choice to make.
Mitch can’t figure out how to win.
Max never loses. 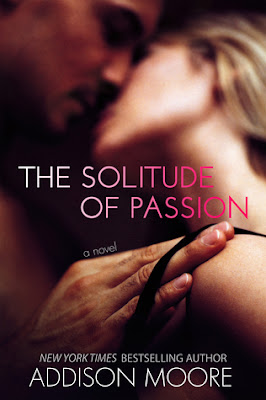 ~Prelude~
Addison has some of the most descriptive writing I have ever read and it really drags me into the story. I can picture every scene and every moment as if it's playing right in front of me. I am always amazed at how well she is able to switch it up and write in 2 completely different genres. She has been teasing me every Tuesday about this book for weeks so when I saw the tour I knew I had to be a part of it. I am so glad I was.

This is probably the most gut-wrenching and emotional love triangle I have ever encountered. My stomach was in knots through this entire book and I needed serious anxiety medication half way through. There was so much tension between Max, Lee and Mitch and the circumstances they were involved in made it that much more painful.

Mitch, Max and Lee grew up in the same town and have known each other all their lives. Max and Mitch were once best friends but scandal rocked their families and tore them apart. Mitch and Lee started dating as seniors in high school and four years later they were married with a child on the way. When Mitch leaves for a 2 week trip to China and never returns, Lee is devastated and Max is there to comfort her. Five years after his disappearance, Mitch returns and everyone’s lives are changed. Max and Mitch have a fight on their hands and Lee has a very important decision to make.

“The three of us had emerged from Mitch’s captivity damaged beyond recognition, and now nothing will ever be the same.”

I liked Lee and felt that she was a genuinely sweet woman who deeply loved her husband, both of them in fact. She was fully committed and deeply in love with Mitch. When he disappeared, she was truly heartbroken. She had always cared about Max, even though he was on the outs with Mitch, and he was there for her when Mitch was gone. She was able to lean on Max in her most vulnerable moments and couldn’t help falling in love with him. Max made her feel alive again and she couldn’t help falling for him. When Mitch returned, she was so torn up on the inside because he was always a part of her and she had been haunted by him all those years. My heart went out to Lee because she had an impossible decision to make. Just when she was finally moving forward, Mitch’s return sent her life into a downward spiral again. I could definitely sense her distress and confusion. I can’t imagine how I would feel in her situation.

“It’s hard to know what’s up and what’s down, what’s real and what isn’t when you’re still  trying to pick the pieces of your heart off the ground.”

Mitch and Max were very competitive and when it came to Lee they pulled out all the stops and didn’t hold back. It was obvious they both loved Lee deeply and wanted nothing more than to be with her forever. While Mitch was her first love, Max had always had feelings for Lee and he managed to find a place in her hear too. While both guys loved Lee and would do anything for her, they were a little immature at times and didn’t always make decisions that were in the best interest of Lee but would give them a one up on each other. Max used their current relationship and sex to get to Mitch and Mitch used memories and the guilt trip to confuse Lee. Not cool guys. I felt bad for Mitch because he came home after 5 years of captivity to find his life in complete shambles and it seemed like Max had taken everything from him. I also sympathized with Max because his life was going really well and Mitch’s return literally sent it down a sinkhole.

It’s the thought of feeling like a third wheel on some date my wife is on with her dead ex-husband. It’s a nightmare within a nightmare, and there doesn’t seem to be a way out.”

My heart broke for all 3 of them because they were each in an impossible situation and no matter what happened, somebody's heart was going to be broken. Lee probably had it worse than any because ultimately she had a choice to make and either way she would lose someone she truly loved and break their heart. I know she had an impossible decision to make but I can't help being frustrated by the way I felt like she led each of them on and gave both men hope that she would pick them. She was extremely weak for both men and allowed herself to be intimate with each of them, making her decision that much harder and gave them each that much more hope. What made the situation so much harder was the children involved because Lee had a child with each of them and they would all be a part of each other’s lives forever. While the love triangle with Max, Mitch and Lee was the primary plot point in this book, there was so much more happening and I loved that. Max had major issues with his brother and Mitch had his Demons left over from China that he was still struggling to cope with. It also delved into Max and Mitch’s relationship and we learned the truth to their falling out. It definitely had a little twist at the end that I wasn’t expecting and I was very surprised by the turn of events.

“I’m not ready to surrender all of my heart to Mitch if it means cutting Max out with a hatchet.”

I still haven’t decided if I’m happy with the ending and who Lee ended up with. I understand why Addison did it that way and it had satisfying closure in the end. I think I was just very surprised by it and it left me really questioning how I felt about it. Overall, I loved this book even though it gave me severe anxiety. It was so well written that I was right there feeling with the characters and it had such a unique and intricate plot. I loved the 3 way POV with Lee, Mitch and Max and felt like it was a perfect way to get to know the most important characters and see all sides of the story. This was the most real love triangle that I have ever read and while it was extremely convoluted, it was a fantastic story about love, hardship and fate.

Mitch lands on top of me, straddling me with his knees. The room glows like a candle with just enough light for me to see his beautiful face.

My fingers float to the scars on his chest. I can’t ignore the welts rising up all over his body. I’m so frightened for him, but I’m thankful he’s here. I’m glad God figured out a way to pull him out of my heart and land him miraculously in the western hemisphere. I’m so glad this fantasy has taken shape in flesh and bones, even if it is just one long dream. I glance down at him lost in his lust with his lips fused just below my belly. We both know this isn’t real. We both know he’s long since dead and things like this just don’t happen. It’s hasrd to know what’s up and what’s down, what’s real and what isn’t when you’re still tyring to pick up the pieces of your heart off the ground.
. 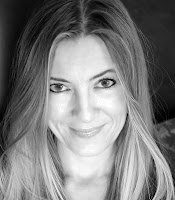 *An e-ARC was provided to me by the author and Inkslinger PR in exchange for an honest review. All opinions expressed are my own and unbiased.*