Today is the release day for A Tale of Two Centuries by Rachel Harris. This is a fantastic book and I recommend you all check it out. If you haven't read the first book, My Super Sweet Sixteenth Century, go forth now and read both books! You won't be disappointed!!

Check out my review and get your copy today!

~Synopsis~
Alessandra D’Angeli is in need of an adventure. Tired of her sixteenth-century life in Italy and homesick for her time-traveling cousin, Cat, who visited her for a magical week and dazzled her with tales of the future, Alessandra is lost. Until the stars hear her plea.

One mystical spell later, Alessandra appears on Cat’s Beverly Hills doorstep five hundred years in the future. Surrounded by confusing gadgets, scary transportation, and scandalous clothing, Less is hesitant to live the life of a twenty-first century teen…until she meets the infuriating—and infuriatingly handsome—surfer Austin Michaels. Austin challenges everything she believes in…and introduces her to a world filled with possibility.

With the clock ticking, Less knows she must live every moment of her modern life while she still can. But how will she return to the drab life of her past when the future is what holds everything she’s come to love? 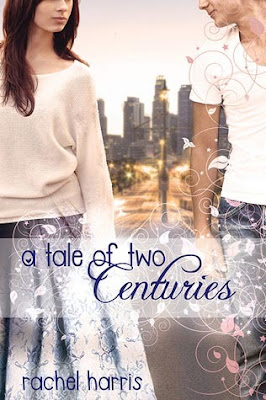 ~Prelude~
I became a Rachel Harris fan from the moment I read Taste the Heat so when I had the opportunity for an ARC of A Tale of Two Centuries, I jumped on it. I stayed up until 2 AM on a work night to finish this book. I definitely felt it in the morning but it was worth it.

A lot of times, a sequel or second book in a series fizzles out and can’t measure up to the first book. However, that was not the case with A Tale of Two Centuries. In fact, it was even better than the first and that’s saying a lot because My Super Sweet Sixteenth Century was exceptional.

We first meet Alessandra in MSSSC where she is the ancestral cousin of Cat. She is shy and sweet but she becomes very close with Cat and she is the only one who knows the truth about who Cat really is and where she comes from. ATOTC opens up with 2 years having past for Alessandra and she is now 16 and courting for marriage. However, the man, Matteo, who has been making promises of a future marries another girl without a word to Alessandra. Distraught over this turn of events, Alessandra wishes she could go on an adventure like Cat and Reyna, the resident gypsy of these novels, grants her wish and sends her to L.A. with Cat in the present time. Only a month has elapsed for Cat since she came back from the sixteenth century.

“I cannot help but think that Cat would be stronger. In my place, she would have stormed across the crowded piazza, flung a cutting remark at Novella, and demanded an explanation from Matteo. Then she would have kicked him.”

I want to say first off, that I wanted to punch Matteo in the throat for what he did to Alessandra. My heart went out to her when she discovered that he had married another. All the secret meetings and the future he promised her seemed to be nothing but lies. Turns out, it was the best thing to happen to her. Why you ask? Because she meets Austin, the school “bad boy” and charmer. I loved Austin! He was clearly carrying around some pain and resentment and he had a shield up to keep himself from getting close to anyone. He allows Alessandra to break down those barriers and slowly they fall for each other. He sees how reserved and shy she is and he opens her up to the adventure she is looking for. He challenges her to find the real Alessandra and let her come to life. She, in turn, shows him how to open up and care about someone again.

“The part of me that is insulted at Austin’s classifying my life as fake is lost in a rush of excitement, curiosity, and a voice screaming in my head that this is what brought me here—my cry, my need, for adventure.”

I felt every emotion with Alessandra and I was nervous and excited for her as she took each new step in her adventure. I loved the development of her character and the strong, brave woman she became.  She got to live her dream of being a performer and being on stage and this helped open her up more. This was Alessandra’s adventure, but we still see a lot of Cat and we get the conclusion to her happy ever after too. All she needed was a little push from Alessandra to open her heart and finally let love in. This book gave me so many feels and I seriously had butterflies in my stomach. I haven’t felt that way from a book in a long time and I think it’s the feeling of falling in love for the first time that’s portrayed in the book. It reminded me of when I was a teenager and the feeling I would get when I first started dating a boy I liked.  Ah, to be young again. The romance between Alessandra and Austin was definitely more intense than that of Cat and Lorenzo and I found myself tied in knots with worry. How can this work? What will happen when she must return? I seriously had no idea how this would turn out but I will say that I was very pleased with the way it ended.

“A low growl is my only warning before Austin’s hands thrust into my hair. “I warned you about playing with fire.”

Once again, Rachel does an amazing job of bringing authenticity to the story and the characters. Alessandra is from the sixteenth century, her speech and actions must reflect that, and they do. The build up of the romance with Alessandra and Austin was so genuine and real that my heart fluttered with each passing moment. I loved every minute of this fantastic and unique young adult novel.

Also, check out My Super Sweet Sixteenth Century. Click on the cover photo below to go to Amazon. To read my review, click here.

*An e-ARC of ATOTC was provided to me by the publisher and the author for a fair and honest review. All opinions are my own and unbiased.*

Thanks Rachel, Entangled Teen and Heather!
Posted by Unknown at 9:41 AM