I am SO,SO excited to have the promotional tour for Stripped by Jasinda Wilder, hosted by Shh Mom's Reading, on my blog today. I am squealing with excitement over this book. The passion and sexual tension between Dawson and Grey is EXPLOSIVE!! Check out my review and enter the giveaway.

~Synopsis~
So how did I get myself into this situation, you ask? Simple: desperation. When you're faced with being homeless and hungry or taking off your clothes for money, the choice is easier than you'd imagine. That doesn't make it easy, though. Oh no. I hate it, in fact. There's nothing I'd like more than to quit and never go into another bar again, never hear the techno beat pulsing in my ears again, never feel the lecherous gazes of horny men again.Then, one day, I meet a man. He's in my club, front and center. He watches me do my routine, and his gaze is full of hunger. Not the kind of desire I'm used to though. It's something different. Something hotter, deeper, and more possessive. I know who he is; of course I do. Everyone knows who Dawson Kellor is. He's People Magazine's Sexiest Man alive. He's the hottest actor in Hollywood. He's the man hand-picked for the role of Rhett Butler in the long-awaited remake of Gone With the Wind. He's the kind of man who can have any woman in the entire world with a mere crook of his finger. So what's he doing looking at me like he has to have me? And how do I resist him when he looks at me with those intoxicating, changeable, quicksilver eyes? I'm a virgin, and he's an American icon of male sexuality. I'm a stripper, and he's a man used to getting anything and everything he wants. And he wants me. I know I should say no, I know he's the worst kind of player…but what my mind knows, my body and my heart may not.And then things get complicated. 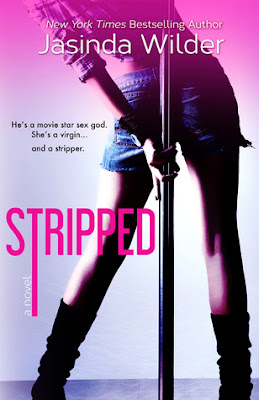 ~Prelude~
It’s no secret that I am a huge fan of Jasinda Wilder. I really enjoy her writing style and the steamy sex scenes she produces. When I saw the opportunity to sign up for the promotional tour, I didn’t hesitate. I pre-ordered this one as soon as I could and I have been anticipating its release for months. I was not disappointed.

There is something about Jasinda's writing that pulls me in and leaves me on the brink of turning into an emotional mess. While Stripped is nowhere near as deep as Falling Into You or as emotionally crippling as Wounded, it still somehow managed to tug tightly on my heartstrings.

I really liked Grey’s character and enjoyed watching her growth and development. She was raised as a preacher’s daughter but she didn’t share all of her father’s beliefs and wanted to be her own person. She was tired of being judged for who her father was and she was tired of having her father tell her who she should or could be. She had dreams and they meant something to her. I loved that she stood up to her dad and she went after those dreams. She did what she had to do in order to become the person she wanted to be and while it was hard and lonely, she never gave up or quit. It was so emotional when she had to start stripping and I really felt her sadness and shame deep inside my soul.

“A single tear drips free to mingle with the sweat on my upper lip. I’m officially a stripper.”

Dawson was incredibly sweet and charming and I liked that he wasn’t some bad boy man whore that reformed for Grey. He had been that guy at one time but changed long before he met her. He was working on being a better person before he met her but being with her made him want to try even harder. There was something about Grey that drew him to her and he had this need and desire to take care of her and protect her. He could see the innocence in Grey and see past the wall and façade that she created to protect herself. I also loved the way he pursued Grey and didn’t allow her to run. He knew when she was pushing him away and he fought that much harder to hold on to her.

“The reality is that I gain more of myself when he kisses me. As if layers of lies and confusion and shame fall away, and everything is just him and me and our mouths and the sensation of his kiss.”

One of my favorite things about this book is the way it flows. The events in the beginning happen long before the heart of the story develops but they are a necessary element to understand Grey and all that she has been through that led her to Dawson. The way the book transitions through time is done perfectly. We don't need every little detail of Grey's life from the time she boards the plane to LA up until she meets Dawson. The real story is about the love between them and they way they open each other up to new experiences. I absolutely adored the way the story followed their path from the beginning to the end and watching them fall in love was magical.  The passion and sexual tension between Grey and Dawson is explosive from the moment they meet. The sex is steamy and the story is beautiful.

“There has never in life been pleasure this intense before. Not ever. I alone know the meaning of true heavenly bliss.”

I’m not sure I adequately described how this book made me feel or how much I enjoyed it but I was once again absolutely enthralled with a Jasinda Wilder book. It was everything I expected and more. It was moving from beginning to end and the conclusion was fabulous and left nothing to be desired.

New York Times and USA Today bestselling author Jasinda Wilder is a Michigan native with a penchant for titillating tales about sexy men and strong women. When she’s not writing, she’s probably shopping, baking, or reading.

She loves to travel and some of her favorite vacations spots are Las Vegas, New York City and Toledo, Ohio.

You can often find Jasinda drinking sweet red wine with frozen berries and eating a cupcake.


Jasinda is represented by Kristin Nelson of the Nelson Literary Agency.


*An e-ARC of Stripped was provided to me by the author for a fair and honest review. All thoughts and opinions are my own and unbiased. *

Stripped will be released on Friday, August 16th!!

Jasinda Wilder’s Stripped Blog Tour 8/11 to 8/15
To follow the rest of the tour, check out the schedule and links below. There is a different giveaway for each day so follow the tour and enter each giveaway.