Caisey Quinn is celebrating the release of Girl on Tour, book #2 in the Kylie Ryans novels! Make sure to check out the excerpt below and enter the giveaway Caisey is offering! 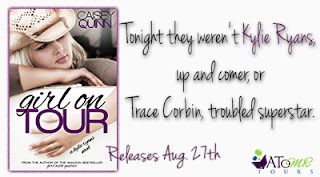 An up and comer trying to make a name for herself...

KYLIE never expected to be stuck on a tour bus with a pampered princess and her boyfriend’s ex.

A troubled artist struggling to hold onto his career...

TRACE thought he was finally getting to do things his way. Until the label added co-headliner Gretchen Gibson, the only person in country music with more issues than him, to his No Apologies tour. Surrounded by tabloid rumors and people they can't trust, Kylie and Trace need each other more than ever. But the choices they make will change everything.

~Excerpt~
When he got to the Vitamin Water stage where she was performing, he had to restrain himself to keep from climbing up onto it and wrapping her in his arms. It had been six long and shitty weeks without her. His dick had been keeping track of the minutes. It twitched at the sight of her.
“Hi y’all,” her sweet voice drawled. “Usually the three of us close the show together but Lily had some…family issues to handle and Mia’s helping her out. So I guess you’re stuck with me tonight.”
A few low whistles pierced the air as Trace made his way up front. Danny was up there with her, and she was sitting on a stool. He watched as she nodded at him to signal she was ready. Something was off. He could feel it, could see it. She usually looked like a damned superstar on stage, but tonight she seemed subdued. Sad even. His arms ached to wrap around her. No. They were keeping things as quiet as possible. Keeping the media out of it as much as they could manage. No need to taint his angel with his hellish reputation.
Danny strummed his banjo and Kylie’s clear voice danced into the air. “My daddy used to say, never let ‘em see you sweat. Never let ‘em see you cry. Girl you know better than that.”
Shit. The raw emotion in her voice broke over him. He didn’t even know she’d been working on a song about her dad. Why didn’t he know that? Oh yeah, because they hadn’t seen each other in six damned weeks. For a moment he was back in , watching the pain cross her face as she told him about her daddy. He shook his head and focused on his beautiful girl up on stage.
“My daddy used to say, never look down on a man. You look everyone in the eye, and you always shake hands.” Danny strummed a bit and sped up the tempo. “Cause you ain’t no better and you ain’t no worse. We all end up in the same ol’ hearse.”
He watched as barely restrained ripples of hurt threatened to roll across her face. Jesus. Watching her fight off her own pain stabbed him hard and deep in the chest.
“He said there’d come a time to stand my ground, said there’d be a day when I didn’t back down. Loved to remind me that what goes around always comes around. These are just the things my daddy used to say.”
Danny stopped strumming altogether and Trace could see the moisture shining in her eyes. If he didn’t know better, he’d think there was some in his too.
Deafening silence surrounded him in the seconds before she finished. Her voice was clear and strong when it pierced the air between them. “When we laid him down in the cold hard ground, I knew it was time to walk away. But I’ll never forget…the things my daddy used to say.”
The second the applause hit, he was in motion. She was standing up there, forcing a smile for a bunch of strangers when she was dying inside. To hell with the media. He barely had time to register the look of surprise on her face when he jumped up on the stage and wrapped his arms around her. Her perfect mouth dropped open slightly so he covered it with his. And what began as a gesture of comfort soon turned to one of need. Desperate need. He didn’t care who was watching or how many people had whipped out their damned cell phones to record it.

About the Author Caisey Quinn lives in Birmingham, Alabama with her husband, daughter, and other assorted animals. She is the author of several New Adult Romance novels featuring country girls finding love in unexpected places. She is currently working on Girl in Love, the third and final book in the Kylie Ryans series. You can find her online at www.caiseyquinnwrites.com.
Website | Facebook | Twitter | GoodReads