Blog Tour: Smash Into You by Shelly Crane ~Review & Giveaway

I have the tour for Smash Into You by Shelly Crane, hosted by Inkslinger PR, on the blog today. I am excited to share a review & the book trailer with you today, as well as a giveaway.

~Synopsis~
Jude has spent the whole twenty one years of his life running. From what, he wasn't quite sure. His mother tried to keep him safe; a low profile, a constant move on the horizon, a week's pay always stashed away. She tried to instill in him that he was special somehow, though would never elaborate. He never felt different. He was so completely normal and vanilla that he wondered if it had all been in her head. But then she was murdered and all he saw was a running silhouette of a man as his mother said three final words to him. Three words that changed his whole being.

Now he's semi-settled into a big town. The college is huge and easy to blend into. It's been three months since he had to move because 'Biloxi', as he calls the man who killed his mother, found him once more.

Then Marley, an eighteen year old girl who is as infuriating as she is blissfully ignorant of her gorgeousness, smashes into his car with hers. Then smashes into his life as he realizes that whatever it is he has that Biloxi wants, she has it, too. And now, they're after them both. 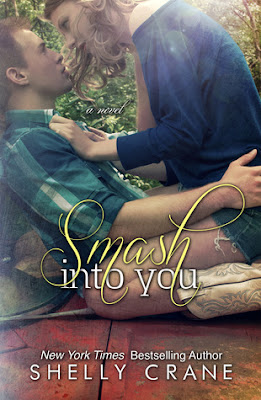 I wasn’t really sure what to expect from Smash Into You but I found it easy enough to get into and read. The characters were likeable enough but I honestly didn’t find them or the plot to be spectacular.

Jude has been on the run since he was a child from a man he calls “Biloxi” since he doesn’t know who he is. He has been on his own since 14, after “Biloxi” killed his mother. He jumps from town to town, never staying longer than 3 months or so before he is found again. When he bumps into Marley, there is something different about her and after saving her life, she is dragged into his world. With every intention of ditching her in order to keep her safe, he soon finds it impossible as he falls for her and they find out that she is wanted by “Biloxi” too.

Jude seemed like a really good guy even though he had to put on the persona of a bad boy. He didn’t allow himself to get close to anyone because he never wanted to put someone’s life in danger and he could never stick around. He is clearly thrown by Marley the minute he meets her and he knows there is something different about her. However, he still tries to resist her but she just keeps appearing and once she is dragged into his life, there is no letting go. I really liked the way Jude protected her and how open he was about his feelings. He was honest with Marley and I was glad that he finally had someone he felt like he could keep. I felt bad for him and the fact that he was so lonely and could never get close to anyone. Marley is a sweet girl who is just as lonely as Jude. She has no family and she struggles to make it by. She quickly falls for Jude but she can be a little stubborn at times. I think she sees that he is trying to protect her but she doesn’t like to feel helpless so she fights Jude when he tries to protect her. In the end, they were exactly what the other needed and brought life back to each of them.


The plot was intriguing and I was definitely constantly wondering why “Biloxi” was after them and how it involved their parents. I liked that it was shrouded with mystery but also romance. It had a nice balance to it. However, I felt like the plot was a little flat and could have used some more depth. Everything moved really quickly and seemed to only scratch the surface. I also felt like some of the dialogue fell a little flat as well. I liked the romance between Jude and Marley but it wasn’t well developed for me. Overall, it was an enjoyable read but added depth would have made it a little better for me.

Shelly is a NEW YORK TIMES & USA TODAY bestselling YA author from a small town in Georgia and loves everything about the south. She is wife to a fantastical husband and stay at home mom to two boisterous and mischievous boys who keep her on her toes. She loves paperbacks, coffee, and candy corn, and to spend time with her family and friends, go out to eat at new restaurants and site see in the new areas they travel to, listen to music and also LOVES to read.
Her own books happen by accident and she revels in the writing and imagination process. She doesn't go anywhere without her notepad for fear of an idea creeping up and not being able to write it down immediately, even in the middle of the night, where her best ideas are born.

*An eARC of this book was provided to me by the author and Inkslinger PR in exchange for an honest review. All opinions are my own and unbiased.*