~Synopsis~
Carly and her best friend Becca are ready to drop a nuclear bomb on summer. It’s the last one before reality sets in and they’re off on their own. Carly is ready to break the mold and stop being known as a goody-two-shoes. In order to get the ball rolling, she agrees to a double date with Gavin – her good-looking, yet moody, lab partner.

Gavin doesn’t have summer plans except to work at his two jobs and hang out in his room drawing. He likes to keep to himself, but lets his brother Nate talk him into going on a double date. Carly isn’t like the rest of the girls at school that drive him crazy. She doesn’t ask a lot of questions and seems to know when to give him the space he craves. Gavin always thought that she was beautiful, but he believes that relationships and love are a lost cause.


Will their date prove that summer love is right around the corner or will it be a dead end?


This book is intended for audiences 17+ 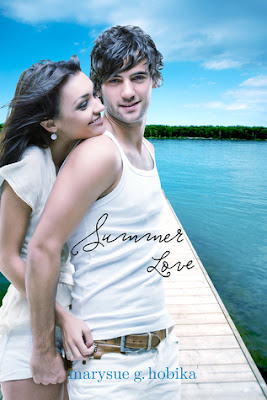 
The band played and I held my breath, waiting to hear Carly’s voice. I thought maybe she’d lost her nerve. I was ready to rush in and rescue her, even if she didn’t want me to, when, like magic, she began to sing. The notes that came out of her mouth were full and sensuous, changing the band’s sound completely. It was harmonious, free flowing, and full.
I’d heard the band last summer, and even though they were good, something had always been missing. That something was Carly. Her voice fit and molded perfectly with Nate’s, and I felt another tinge of jealousy. Their sound filtered through the cracks and walls of the garage and into the night air. For a second, I forgot how to breathe. I found myself slinking back into the garage as the song came to an end. I felt empty and lost when she hit the last note, and every cell in my body craved more. I’d been wrong. So very wrong.
Everyone in the garage was silent, as if the music had cast a spell on them. All of a sudden, led by Ed, claps and cheers echoed. Carly looked elated until her gaze landed on me. I read in her eyes that she thought I was a jerk for not believing in her, and I couldn’t blame her. I was a jerk.
“Damn!” shouted Ed. “That gave me goose bumps.” He hugged himself, rubbing his hands over his arms.
“I told you Carly could sing,” Becca said, directing her words toward Nate.