~Synopsis~
Now that Willow Avery is out of rehab, she's got one chance left to prove herself before she’s officially on every producer’s shit list. At least, that's what her parents and agent are claiming. She doesn't really give a damn if she never makes another movie or not—she just wants to get on with her life, get back to her friends, and find her next escape. But Willow is broke. And whether she likes it or not, acting is the only job she knows how to do.When she accepts the lead in a beach drama, Willow finds herself in Hawaii. And in Hawaii, she finds Cooper, the gorgeous surfer hired to train her for her new role. With the bluest eyes she’s ever seen and the sexiest Australian accent she’s ever heard, Cooper’s different from the men she’s used to. He doesn’t want to use her. And he refuses to let her fail. But when an old friend re-enters Willow’s life—a friend whose toxicity she’s been drawn to time and time before and whose presence brings about the painful memories she's tried so hard to suppress—Willow will have to choose between the girl she was and the person she’s becoming. The lifestyle that helps her forget the pain and the guy she’s falling hard for. 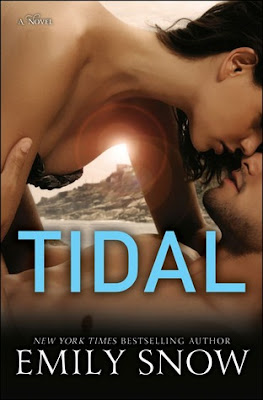 Tidal was definitely a surprise to me and I wasn't expecting it to be as deep as it was. While I have read a lot of new adult books that are way more emotionally intense, I was expecting the emotions that I felt while reading this book. It was definitely deeper than I gave it credit for from the synopsis.

I really liked Willow and found her to be a likable character. As a drug addicted actress, she had the potential to be a self-entitled bitch, much like her friend Jessica. Instead, she was down to earth and emotionally scarred. At one time, she did love acting but after all she had been through, it became more like a chore for her and she used drugs as a means to cope. She is instantly attracted to Cooper, and who wouldn't be? Sexy hot surfer with Australian accent, I need to get me one of these. However, a relationship is the last thing she needs as she tries to overcome the obstacles of her addiction.

Cooper has some hidden demons and secrets of his own. He was instantly attracted to Willow and felt this pull to her. He had this desire to take care of her and keep her safe. He came on pretty strong and I was impressed with Willow's ability to hold him off for as long as she did. I think as much as Willow needed help and support, Cooper needed her just as much.

My heart really went out to Willow because she was so torn and broken inside. She had been through so much and in turn used drugs to numb the pain. Even after 6 months in rehab and being clean, she still struggled everyday. She desperately wanted to feel loved and cherished and the rejection from everyone in her life was painful. I think that was why she was so guarded with Cooper and skeptical about his advances. No one had ever loved her unconditionally before. Her own best friend was un-supportive of her desire to be clean and stabbed her in the back the first chance she got. Luckily, she got to know Eric and Paige and they turned out to be really good friends that she could count on. For the first time, she had people in her life who didn't want anything in exchange. They just wanted to be there for her.

In the end, I was super proud of Willow for letting Cooper in and making the right decisions. Her parents really surprised me too and I was happy that they finally showed their love to Willow in all the right ways. The ending was emotional and perfect.

*A paperback copy of this book was provided to me by the author and Courtney Brach at Touchstone for a fair and honest review. All opinions expressed are my own and unbiased.*

Thanks Emily & Courtney!
Posted by Unknown at 11:00 AM